If you have noticed with my blogs, I like to tell a short story.  Personally, I like to read a short story that includes a wine other than “Here are my tasting notes” – done.  For people to relate to you, I feel that they have to kind of know you.  Since many people reading my blogs do not know me, here is my shot.  I do have many friends following my blog so I hope they enjoy the stories and being a part of it when I am able to include them.

Over the years I’ve found that wine is becoming an important part of my life.  No, it is not the drinking piece, rather it is the enjoyment of the social aspect.  Chris and I frequent Napa and Sonoma many times a year.  We have searched out our favorite wines and discovered many new ones as well.  The really fun part is meeting the people involved with the industry and the ones behind the wines.

We have been blessed with many amazing relationships over the years.  Some friends are winemakers and others are involved in hospitality.  We hope to make the Valley our home someday!

Speaking of relationships in the Valley.  There are two people who work for Joseph Phelps whom we consider friends.  I will not name names but I sure hope if they read this blog they know who I am talking about!  We look forward to seeing them on Insignia day and particularly one of them who will share their day off with us.  Maybe a trip off of Chalk Hill Road? 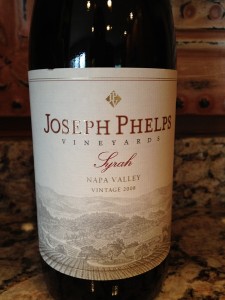 After placing the gem on the counter I ran over and grabbed a couple glasses and a cork screw.  I did not hesitate to cut the foil and pull the cork.  Hearing the “pop” is like music to our ears. 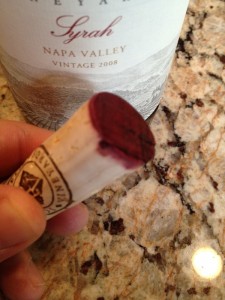 Giving the cork a quick inspection it was looking mighty fine!  I immediately poured some  into our glasses and was ready for a review.

Looking at it, the depth of the wine was deep, not thin or pale.  The color was Garnet.  Very beautiful and clear. 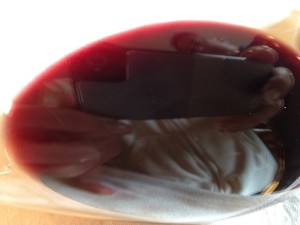 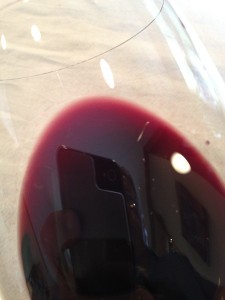 I was very happy with what I could see.  I gave the 2008 Syrah a sniff.  It was slightly aromatic, but not overwhelming.  It did smell fruity!  On the nose I could detect Blackberry, Blueberry and a little Plum and spice.  Our mouths were salivating…  As we took our initial taste, it was not dry.  The Syrah was medium bodied and I felt as though the acidity was in check.  The tannins were medium and could be felt from the front to the back of my tongue.  The finish was long and flavorful.  Some of the flavors detected were dark fruit (not really one in particular) as well as spice.  Chris was humming immediately with the very first sip of the 2008 Syrah!  It’s one of her favorite varietals!

We both rated the 2008 Joseph Phelps Syrah three stars.