Have you ever opened a bottle of wine and it just did not smell right?  What is that smell?  Is it vinegar, wet cardboard, or rotten eggs?  I plan on sharing the various wine faults that could be detected in your wine.

Did you know there are twelve known wine faults?  All of the faults are created at the winery.  The trained winemaker should be able to identify the faults and remedy the problem before it enters the bottle.  However, this is not always the case.

Your nose is the best tool determining if the wine is good or bad.  When you go out to eat and order a bottle of wine, your expectations will be the Sommelier or wait staff will offer you a small pour after opening your favorite bottle of wine.  It’s your job as the consumer to analyze what is in the glass.  If they do not offer insist!  Once you are given the glass look at the color, is the wine clear or hazy?  If it does not look right refuse the bottle.  If it looks good, give the wine a swirl and stick your nose in the glass leaving your mouth slightly open (keeping your mouth out of the glass). Now take a slow and deep breath.  Do this a couple of times and swirl the glass.  After you smell the wine, here are some wine faults you should be aware of.

So what are the most common faults you would pick up or see in your bottle of wine?

The most commonly known wine fault you will find in your bottle is called Wine Cork or “Corked wine“.  The technical definition is 2,4,8, Trichloroanisole (TCA).  The odor comes from corks damaged by chlorinated products used for bleaching.  The damaged cork contaminates the wine it comes in contact with.  The winemaker will not notice this during bottling.  A corked bottle of wine will smell like a wet soggy newspaper.  When tasting the wine there will be a stagnant taste, similar to that of stagnant water.  It is said that 2% to 5% of the bottled wine today is corked.  Some time ago there was a huge problem in California.  The removal of chlorine for sanitation in California has been reduced or just eliminated thus lowering the possibility of  TCA.

Vinegar nose.  The smell and/or taste of vinegar indicate that a wine has either been badly made or the bottle has been open for too long and has been attacked by a bacteria, called “Acetobacter”. Acetobacter reacts with oxygen and this reaction changes the taste of a wine to a vinegar flavor.  All wines contain acetic acid, which is believed to play a part in the aroma.  Too much Acetic acid constitutes a fault.  If you were curious this is how vinegar is made.

Sulfur, the smell of a burnt match.  Sulfur Dioxide (SO2) is a product that winemakers use to protect the wine from spoilage during fermentation. A winemaker has to be very careful adding SO2.  So much SO2 could slow down the fermentation.  Not enough and bad yeast could start fermenting which would make bad wine.  The other purpose of SO2 for red wines is to control the timing of malolactic fermentation (MLF). MLF also called the “second fermentation”, has positive effects on the flavor and aroma of wines.  It also deacidifies the wine making it stable against bacterial spoilage and the production of bacterial odors. Finally, SO2 is used during bottling to protect the wine from oxidation. Too much SO2 could cause very strong headaches or even migraines if you are sensitive to sulfur.

Cloudiness or fizzy wine.  Cloudiness is an indication of the possible growth of yeast or bacteria; fizziness indicates the wine has undergone an unintentional second fermentation (Malolactic Fermentation) in its bottle.  A winemaker must make sure MLF is complete prior to bottling. It is likely the wine will be unpleasant, albeit harmless, to drink.  Or, the winemaker added sugar to the wine prior to bottling and did not account for possible life yeast in the wine.  The added sugar would be consumed by the yeast and create CO2 (carbon dioxide) creating the fizzy wine. 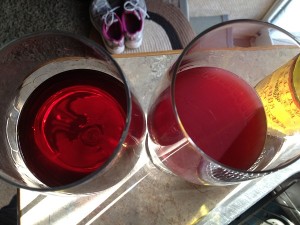 The glass on the right is cloudy

Crystals on my cork or bottom of my bottle. 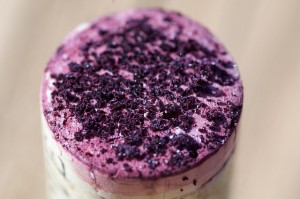 They are “Tartaric Acid Crystals” (also known as “Tartrates”) are neither harmful to the drinker or the wine. Tartaric Acid is a natural component found in grapes, and therefore, wine, that crystallizes when wine becomes very cold, or if the wine is old. Tartrates are usually a sign of a quality wine that has not been over-treated during vinification.  It is possible to ensure that the Tartrates do not form by cold stabilization and filtering the wine prior to bottling. However, such aggressive filtration is a more common practice in the making of bulk-produced wines it can also strip a wine of its flavor.