Today Chris received a very nice gift from Cosentino Winery for being the April Facebook fan on the month.  She received six very nice Bordeaux style Ultima wine glasses.  On the base of each glass was etched Cosentino Winery, Girard, Kunde Family Estate, and Windsor Vineyards.

We had just bought twelve new wine glasses last weekend.  Now that we had received these awesome glasses we boxed up the twelve new ones and put them away for another day.

We planned on having Pork Chops on the grill for dinner.  Now that we had these new glasses be knew we had to have a Cosentino wine with our dinner.  I thought what better to have with the pork chops than a CigarZin. 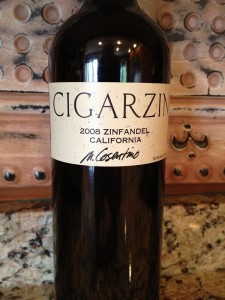 I have a few friends who know Cosentino by the CigarZin.  I think its kind of like the Biale Black Chicken Zin.  Some wineries are known by their wine.  I wandered down to the cellar and grabbed my only bottle of Cosentino CigarZin.  The bottle was a 2008 and was ready to take its final journey.

I pulled the foil and pulled the cork.  I poured the Cigarzin into the new Ultima Bordeaux style wine glasses. 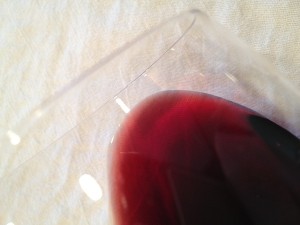 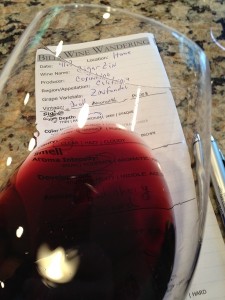 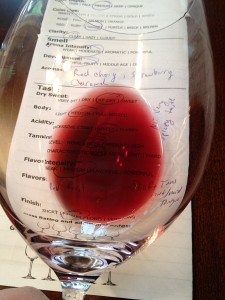 Tasting the CigarZin it was not at all dry.  The CigarZin was medium bodied and the tannins to me were weak.  The flavor intensity was medium.  As far as flavors we could taste Black Fruit, Raspberry and a hint of pepper.  The finish was medium and the tannins were felt in the front to the middle of my tongue.

The spices on the pork chops enhanced the flavor of the 2008 CigarZin.

Chris and I both rated the 2008 CigarZin three glasses.

Chris and I are wine club members at Cosentino Winery and Girard.  We plan on visiting Kunde Family Estate and Windsor Vineyards during our trip to the valley mid May.