Our Monday began with a call from Timothy at Verite to confirm our arrival time for a visit.  He mentioned that we would be having lunch under the big oak tree at Verite Winery.  We agreed that a good time to show up would be at 11:30am.  This would give us a little time to introduce our friends to Monique and Pierre Seillan.

On our way to Sonoma Valley we stopped in Calistoga to pick up our friends Carly and Robert.  It was Roberts birthday a few days earlier so he had planed to enjoy a day off with us.  Since Robert had not been to Verite, he was truly looking forward to it.

We headed to Verite driving on highway 128.  The drive was spectacular as usual.  Mount St Helena had low clouds flowing through it.  Nights Valley was beautiful!  Half way there we stopped to take some pictures. 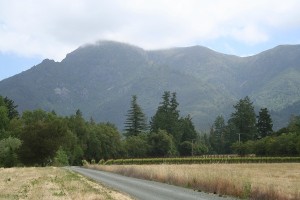 We arrived fifteen minutes early so we decided to drive past the winery on Dry Creek Road.  I wanted to see what looks to be a new winery under construction – just a few miles down the road near Dry Creek Winery.  It appeared as though the winery might possibly be open later this summer.

As we drove onto the Verite Estate we could see some people working in the vineyards.  We parked and then walked into the tasting room where we were greeted by Timothy, Kim and Teresa.  A few minutes later we could see Pierre approaching from the house.

It was so nice to see Pierre again!  He looked great!  The last time we saw him he had been suffering from a broken shoulder.  He had the accident while working in Bordeaux and was in a lot of pain.  It was clear that he was in better shape and was feeling much better.

He greeted us with a huge smile and immediately hugged Chris.  After a few introductions we presented him with a gift of a 2004 Shafer Hillside Select (Bill and Chris) as well as a 2008 Joseph Phelps Insignia (Carly and Robert).  We then headed to the patio.

The picnic table under the tree was spectacular!   There were many glasses of Pierre’s most resent 2012 Rose’, which was interesting and not your traditional Rose’.  It had been blended with four of the Bordeaux varietals and it was excellent!  The Rose’ was made for his special events and will not be sold to the public. 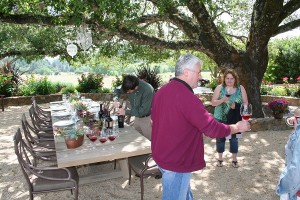 Just moments after we were served the Rose’, Monique was entering the picnic area.  We were so happy to see her and she too was looking beautiful!  After our introductions Pierre suggested we have a seat.  Chris and I were fortunately seated on the end near Pierre and Monique. 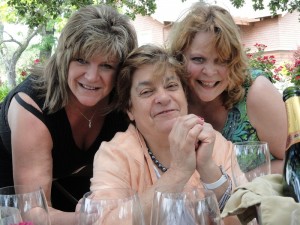 We began drinking the wines with Carly serving us the 2008 Insignia (Both Insignia and Hillside were decanted by Timothy prior to us sitting down).  Pierre was familiar with Joseph Phelps Vineyard and commented that it was a great winery.

We also enjoyed the Shafer wine prior to drinking Pierre’s wines.  While enjoying some heart felt conversations, we started the Verite journey with one of my all time favorites.  It was a 1998 Verite!!!  We also enjoyed a 2005 Le Desir (another favorite).  Monique and Pierre asked Chris which was her favorite and she of course said that it was the 2002 La Muse.  Chris loves Merlot and the La Muse is predominately a Merlot blend which honors the great wines of Pomerol.

Our lunch was served in courses paired with the Verite wines and both were superb!

After we were done with the La Muse wines, Timothy came over to share some Charles de Cavanove Premier Cru Champagne.  Monique stated that “it was the best in the world” and I have to agree that the Champagne was amazing!  The makers of the Champagne happen to be friends of Pierre and Monique’s!

Desert.. well what can I say!  We enjoyed a Chocolate Tort and Tiramisu to share!  Take a look! 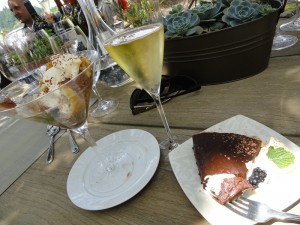 We also joined the Verite Team in a birthday celebration for one of their staff members with a delicious chocolate cake!

After we had finished up with the Champagne, Monique had to leave us to prepare for a next day travel departure.

We were able to spend a bit more time visiting with Pierre and the others under the big Oak tree with a bottle of 2008 Montana and Dakota Anakota Wine, which is another label of Pierre’s.  Both Anakota wines are tasting wonderful.  If you are interested in the wine you need to contact the winery to order it.  I would definitely recommend that you give it a try as it is truly excellent! 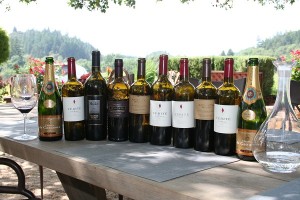 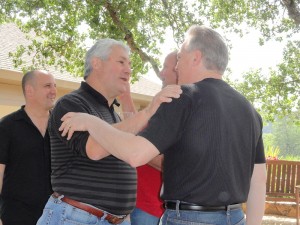 As the saying goes, “All good things must end”.

As bummed as we were to end the wonderful day, Chris and I will be returning in June for the Verite “Fete De La Fleur” (a Flowering of the Vines Celebration) event and special dinner party.  We both are looking forward to it as well as spending more time with Pierre and Monique again. 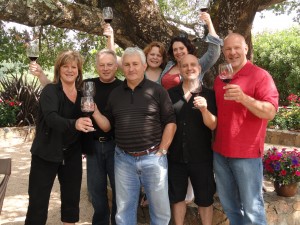 A special thanks to Pierre, Monique and their entire staff for making our anniversary celebration so special!