I knew this wine was my “all time favorite” from the very first time I experienced an on-site tasting at Verite Winery.

The initial time I had ever experienced sipping a Verite wine was with my friend Kevin at Tarragon in Downtown Sunnyvale in 2008.  While we were looking at the wine list the server mentioned a wine called Verite.  He said they had tasted it earlier and he highly recommended it.  I wish I would have written which one.

A few months following, I had spent a week in Sunnyvale for my day job.  Chris and I flew in on Friday, the week prior and stayed at Kevin’s house.  When we arrived, we started talking about where we wanted to go and what we would like to do.  We decided to skip Napa and make a trip to Sonoma for a day.   Reviewing our options we decided to visit Twomey, Ferrari Carona, and Silver Oak.  We decided to look up the new “Tarragon discovery” called Verite.

On the drive up I left a message requesting a tasting.  A few hours later LeeAnn returned my call.  She only had an opening for four as she scheduled with another party of six.  The tasting was the last one of the day.  We were looking forward to the tasting.

We arrived fifteen minutes early and was greeted by LeeAnn.  She was welcoming and  started our experience by giving us a brief tour of the vineyard while talking about the history of Verite. 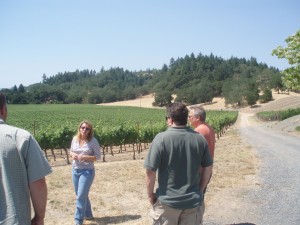 We sat down in an attractive tasting room along with six people from Wisconsin.  Now I have nothing wrong with Badgers (well maybe 😉 I am a Gopher!), but in all seriousness  this gang really did not appreciate an excellent wine.

LeeAnn provided us with a superior description of the three wines that Verite offered.  The wines are inspired by three varietals La Joie (Cabernet Sauvignon), La Desir (Cabernet Franc), and La Muse (Merlot).  We really enjoyed them all.  She was able to describe the wine makers passions.  She described him as a farmer and a romantic.  She shared stories of his poetics and during the tasting we were pleasantly surprised by a visit by the winemaker himself!  We spent time listening to Pierre and his knowledge was intriguing.  Of course, Chris immediately asked Pierre for a group picture.  We were happy he complied! 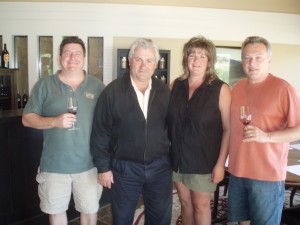 At the end of the tasting, we received a sample of a label Pierre started called Archipel.  As well we received the Verite wine price list.  The prices of the wine took me by surprise, but I knew I had to take a few of these gems home!  Once the Badger group left (no purchase) it was my turn to see LeeAnn with my choice of a few bottles of wine to purchase.

As we were talking she discretely asked me if I would be interested in the left over, open bottles from the tasting samples.  It was fathers day weekend and the winery is not open on Sunday.  I said absolutely!  I purchased my wine (as did Kevin) and we proceeded to leave.  I suspected Chris was really nervous when she saw the many bottles of wine I was taking with us.  On the drive back to Kevin’s I mentioned some of the bottles were gifted by LeeAnn and some nerves were settled.

The following day we enjoyed Verite and Archipel wines along with Bill & Nancy, Kevin’s parents in Pacific Grove.  The bottles had been open two days with the cork intact all the while.  I have to admit they were even better on the second day!

Since that initial visit, we have made it a priority to visit Verite numerous times.  Pierre & Monique have become close friends and we consider ourselves fortunate to have met them.  Their entire staff is knowledgeable and kind.  Timothy welcomes us and makes each visit memorable and unique.

I plan to add additional blogs about our various trips to Verite.  Numerous friends have had the privilege of visiting the Winery with us.  We value feeling welcomed and appreciate being treated like part of their family.  Both Chris and I have a special place in our hearts for Verite, Pierre and his wife Monique!

This is just the beginning of the Verite story!