I woke up last Friday morning feeling refreshed and feeling good!  The first words I spoke to Chris were “It’s going to be a great day”!

As the day progressed, I started thinking about what wine I wanted with our dinner.  Chris was making a fish dish and I was just not feeling like having a white wine.  After some thought, I knew what I wanted; a bottle of Verite. But what year or style?  Moments later I decided on the 1998 Verite. 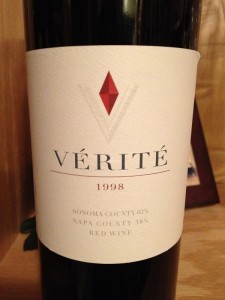 As I opened the bottle, I reflected back to the first time we had the opportunity to visit Verite in Sonoma.  (If you want to read more, here is the link to the BLOG: Verite Winery.)  As time has progressed, Chris and I have become friends with Pierre, Monique Seillan and the Verite staff.  We were recently called Ambassadors of Verite Winery by Pierre and it is our pleasure.  As you likely have heard, I have exclaimed many times over the years that Verite remains my favorite wine!  I may be a little biased, but every time Chris and I visit Verite we are welcomed like family and we feel blessed to have seen the winery grow over the years and become one of the premier wines in the US and France.  And, kudos to the nine 100 point wine ratings!

Before Chris started dinner that evening, we decided to relax a little bit and decompress from the day.  I wandered down to the cellar to grab that beautiful bottle of 1998 Verite.  Chris was sitting on the couch with her iPad.  As I showed her the bottle, she reminded me what I said earlier about “Its going to be a great day”, and now she knew why! 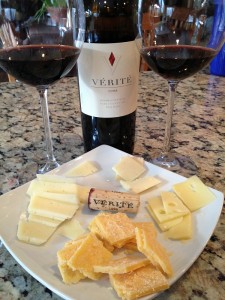 Prior to opening the bottle Chris grabbed some cheese and put together a small variety that would pair nicely with the 1998 Verite.  I poured us both a glass of wine and Chris decided to send Monique a text photo saying “It’s 5:00 in Minnesota, Cheers!”.  Minutes later Monique replied back with a “Cheers”!

Prior to eating any cheese I decided to grab my tasting sheet and make some notes.

Sight
The 1998 Verite had a nice garnet hue.  You could see that there were many more years of life in this wine.  The color depth was medium and was very clear.  I did not see any sediment in the bottle or our glasses.  The edge (meniscus) of the Verite was clear and showing some age. 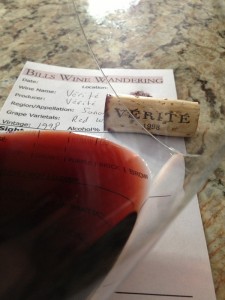 Smell
The wine was very aromatic including a very nice floral bouquet.  It did not smell old or earthy but had a slight mineral nose to it.  As we swirled the wine in our glass, the nose become very aromatic and I have to say that I notice that every Verite I have ever enjoyed exhibits this style of nose.  The terroir certainly lends itself to the style of the Verite.

Taste
It was excellent!  We both “hummed” with our first sip.  The Verite red wine was not dry and it was medium bodied.  The acidity and tannins were balanced as my mouth watered with every sip.  This wine was complex yet elegant.  You could feel the tannins but they were soft and the finish was long and flavorful.  There was no dominant flavor (fruit, floral, mineral) that we could point out, but as the wine opened up we could taste cherry, blackberries, some mineral and earthy notes with melted chocolate.  For a fifteen year old red wine it was holding up very well!

We both rated the 1998 Verite four glasses!  As the wine opened up over time, it could easily become a five glass rating.  The 1998 Verite paired very well with our dinner.  Now I wish I would have pulled the cork in the morning.  Then in the afternoon poured the Verite red wine into a decanter.  The Verite wine would have opened up even more!