Now that the Bachelorette has started again, Chris and her friends are getting together weekly.  All of the girls bring something to drink and an appetizer.  I usually stick around for the appetizers, load up a plate and head to the bedroom for my own TV viewing. 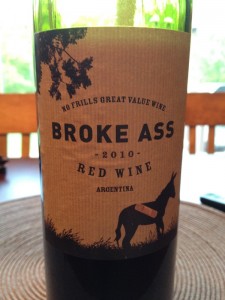 One of Chris’ friends brought a bottle 2010 Broke Ass Red.  The label looked interesting and I immediately noticed on the label, “No Frills Great Value Wine” and it was imported from Argentina.  I was intrigued.  If you put on the label great value wine it has to be fairly decent right???

After further reading of the back label, the blend was 50% Malbec and 50% Syrah.  I like both varietals by themselves so I wondered how they would blend together. 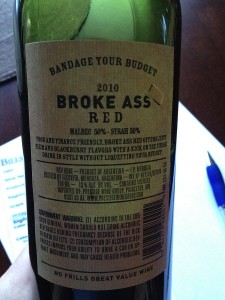 I decided to use my “VinoAir”.  I figured a little decanting as you poured would only help.  It was time to cut the foil and pull the cork.  The cork was synthetic.  I was not surprised.  If you used cork, I am sure it would add at least a dollar to the price of the Broke Ass Red.

I poured a small sample into my glass and started inspecting it.  The color depth was pretty pale.  I figured it would be darker since both Syrah and Malbec are darker colored wines.  The Broke Ass Red was pretty clear and the color was purple/garnet. 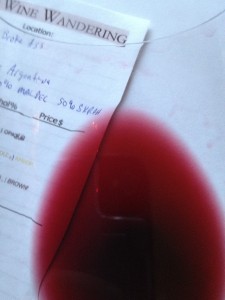 It was time to give it a smell and taste.  The aroma was pretty weak and a little fruity.  I could smell Black Cherry and Spice.  At first, you might think it was a Zinfandel if you did not read the label.  Tasting the Broke Ass Red it was not dry.  It was very light bodied and there were some tannins.  The finish was short.  Some of the flavors were plum and black cherry.  I do have to say it was not bad!

After doing some research on-line it looks like you can purchase the 2010 Broke Ass Red for less than $10 per bottle.  Some on-line stores were selling it for around $6 per bottle.

If you have friends who do not understand nor appreciate a really good bottle of wine, I would recommend the Broke Ass Red.  For the money, you cannot beat it.  So I guess they were right with the “No Frills Great Value Wine”.  Maybe the VinoAir helped too!