Chris and I have been members of Joseph Phelps since the first time we visited the winery.  I immediately fell in love with Insignia.  I have to admit the Cabernet Sauvignon and Merlot are pretty damn amazing too!

Every spring, members of the winery have to call to reserve a pair of tickets.  It is usually the first Monday in April.  Sorry my friends, you have to be a member to participate in the Insignia day event.  If you factor in the amount of food, entertainment, and the wine you drink, its well worth the price of the membership!  I would recommend it and attend the Insignia day event.  You will not be disappointed. 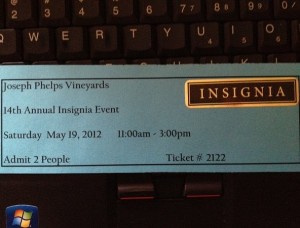 The “Golden” ticket, well it really was purple.

This year we decided to attend on Saturday.  Insignia day is three days (Friday through Sunday).  The winery closes on Thursday to prepare.  Saturday was perfect this year since Dave and Heather wanted to go to San Fransisco for the day.  Heather had never been there and she really wanted to go.

We started Saturday eating a  good breakfast.  Trust me you need a good base when you taste wine for many hours.  Make sure you drink a lot of bottled water so you remain hydrated too!

Cynthia and Dan were at the house around 9:30am to pick us up.  Dan was our designated driver and we really love and appreciate Dan!  After a quick stop we were at Joseph Phelps around 11:30am.  We had to show our “Purple” ticket before we could be let in.  I was very anxious to get in and start the day.  As we entered the vineyard we parked the car and was escorted into a van and driven to the estate.  I think this is a great idea just in case someone is over served.  The staff can withhold the keys.  I’m not sure this has ever happened and it won’t happen to us!

The drive up was less then five minutes.  Exiting the van we were greeted by the Joseph Phelps staff under the tent with a food plate and a glass of Sauvignon Blanc.  The weather was perfect and the temperature was in the mid 70’s already.  The Sauvignon Blanc was very refreshing.

As you move through the tent there is a plethora of food including Pizza cooked in an external pizza stove to pulled pork sliders, cheese and meat plates to sweets. 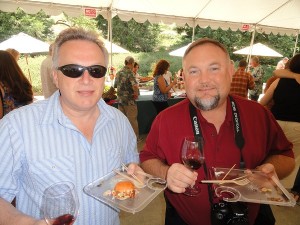 Bill and Dan eating some food

Besides the yummy food and treats there are various tables of Joseph Phelps wines.  I was lucky.  As we walked in we were greeted by someone with a carafe of 1992 Backus.  It was truly amazing and I thought it was holding up pretty good.  I do have to say its time to drink it now.

After some yummy wine and food we met Kevin and Liz out back.  They had saved us a place and we needed to get back there.  Many people were trying to take the spots and Kevin could not hold on to them much longer. 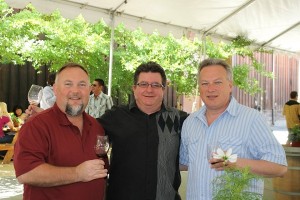 As we got situated Chris and I ventured into the hospitality room where Claude was sharing some excellent Insignia.  It’s always a treat to see Claude and he is an excellent host.  As the day progressed, we had many samples of the 2008, 2009, and 2010 Insignia.  We also made sure to try the Syrah and Cabernet Sauvignon.  I also made an attempt to try the 2009 Joseph Phelps Fog Dog Pinot Noir.  The Pinot was tasting pretty good and was refreshing.

We eventually gave up our spot and ventured to the front hoping for more carafe’s of special wine. 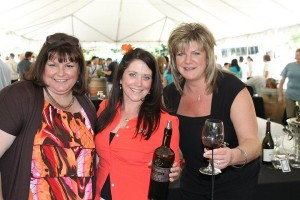 We were lucky to find a wine barrel to belly up to.  We were close to a sample tasting table hosted by Carly and another lady.  And, we were right by the band who was playing some pretty good music. 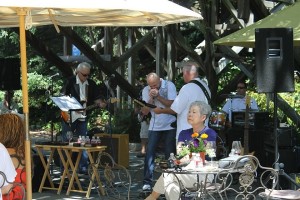 I had mentioned I wanted to meet Bill Phelps early that day.  As luck would have it Bill and his wife Andrea were only a few feet from us talking to another couple and taking pictures.  Chris immediately wandered over there and I followed her.  As they ended their conversation, Chris jumped in and introduced us.  I have to say Chris does an excellent job networking with people.  I mentioned we were fans of Joseph Phelps wine.  Chris spoke up and told Bill Phelps I write a wine blog and have featured his wines many times.  I graciously presented Bill a business card and he gave one of his to me.  Bill said “if there is any time I wanted to talk about his wines to please give him a call”.  Can I say I was stoked!  We ended the short conversation with pictures.  Dan and Cynthia came over had theirs taken too. 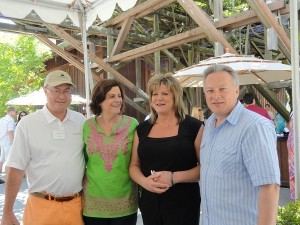 There was another tent on top of the hill where public parking is during normal hours.  Chris, Cynthia, Dan, and Liz headed up there while Kevin and I held the fort.  Chris came back with some Paella.  I have to say it tasted pretty good.  I think it was better than the Paella we had when were in Spain years ago!

The clock was nearing 2:30pm, we decided it was time to beat the rush and ventured to the bus.  The bus drove us down to the main pickup area.  We provided our ticket and off we went. 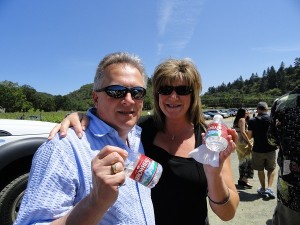 Off the bus with our water!

I am already looking forward to Insignia day 2013.  I wonder what Bill Phelps will have in store next year?