My introduction to Cline wines came from my Uncle Ron.  Ron lives in Brentwood California and has been retired for many years, but he sometimes pours for Cline Wines in Brentwood when there are fairs or other events.

After our initial introduction we had our friends Joe and Lisa bring in some Cline wines.  They had brought in the Cashmere, Syrah and a Zinfandel. 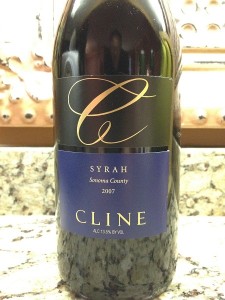 I decided to throw the bottle in my cooler for a little bit.  I wanted the Syrah to be a little cooler than normal, that is normal for Chris and I.  As Chris was plating our delicious meal it was time to pull the cork and pour us some Cline Syrah. 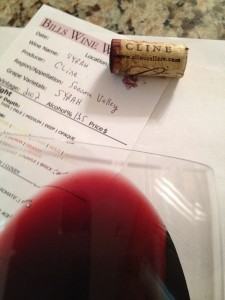 I had a few more minutes so I decided to rate the 2007 Cline Syrah before dinner.

Looking at the 2007 Syrah I noted the color depth was medium and the color was Garnet.  If you held up the glass by a bright light and looked through it, the Syrah was very clear.

Smelling the 2007 Syrah I noted Black Cherry and Spice.  The overall smell was moderate and the Syrah smelled young and fruity.

As we tasted the 2007 Syrah it was off dry.  The Syrah was medium bodied, but it was slightly tart.  The tannins were week and soft.  The finish was medium, and the tannins were felt in our mid palate.  Some of the flavors were spice and plum.

Chris said it’s not my favorite.  However, for the price I rated it three glasses.  I do think this one is best served with food, not alone.