Chris and I discovered Crocker & Star winery during a trip to Napa in 2010.  We were staying at the Harvest Inn just south of St Helena.  If my memory serves me there was a flyer in the lobby talking about a Cabernet release party.  When I looked at the address Crocker & Starr was only a few blocks away, so why not?

The first trip to Crocker & Starr was just Chris and myself.  We called ahead to say we would be attending the event.  The estate grounds was very nice and the weather was beautiful that day!  Their Cabernet Sauvignon was excellent.  We enjoyed the wine and I decided to by a magnum for my cellar.  As we were leaving I made a mental note to come back for a private tasting that May.

Fast forward a few months to May.  We were in Napa for an extended weekend while attending the Insignia Release Party.  I had called ahead and made a reservation for a private tasting that Saturday morning.  Cynthia and Dan were with so it would be the four of us.

As we entered the winery the flowers and gardens were beautiful.  There was an attractive arch with vines growing on it and we entered the quaint small tasting room that was under construction, but nearly complete. 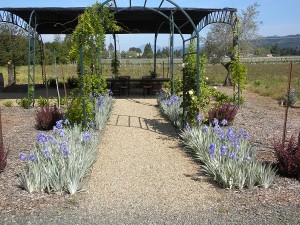 We were able to taste the Cabernet Sauvignon, Cabernet Franc and the Sauvignon Blanc.  I was really impressed with the wines so I decided to purchase a case of the 2007 Cabernet Franc.  Its been a few years since we have revisited the winery and I think Chris and I need to drop by the next time we are in St Helena. 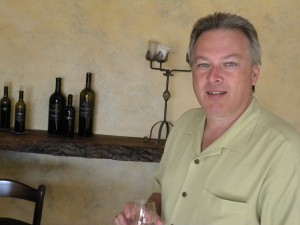 Inside the tasting room getting ready to sample some wines. 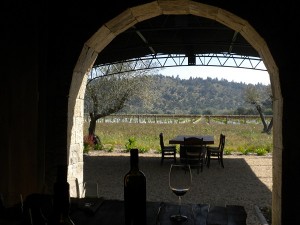 Beautiful view of the vineyard and mountain from the inside tasting room. 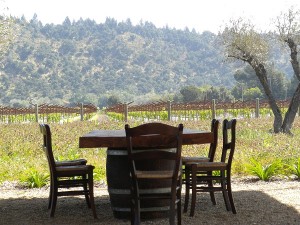 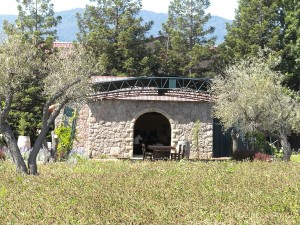 Dan took this excellent picture in the field looking back at the tasting room.

Over the past few weeks we have had a heat wave in Minnesota.  It’s been terrible outside so there have been many nights dining in at home.  We’ve been using the grill out doors to keep the heat out and last Sunday was no exception.  We enjoyed a nice fillet of steak and garlic shrimp skewers.  It’s been a while since we have had a steak so I was really looking forward to it!  I wanted to have an excellent wine to pair with dinner.  As the day progressed I knew I wanted to have a bottle of the 2007 Crocker & Starr Cabernet Franc! 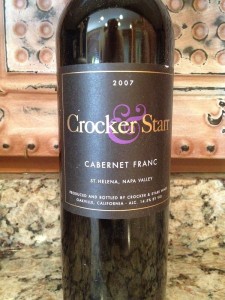 Since we were having a perfect meal, I wanted to make sure the temperature was right for the wine.  I grabbed my handy little bottle thermostat to check the temperature of the bottle. 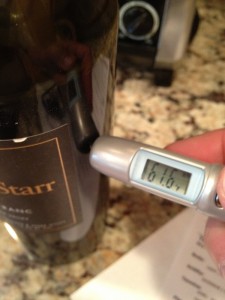 The ideal drinking temperature is 65 degrees.  The Cabernet Franc was measuring a tinge under 62 degrees so it was ready for me to pour Chris and I a glass.  I then grabbed my tasting notes. 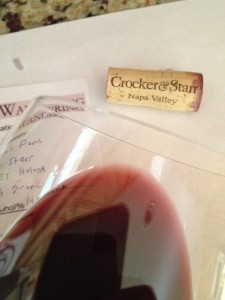 As soon as I poured some the wine into the glass I could tell it was a high quality varietal.  The Cabernet’s color depth was deep and had a nice garnet color and it was very clear in the glass.

It was time to give this little gem a smell and taste.  The nose of the Crocker & Star Cabernet Franc was very aromatic.  The hints were very pleasant, young, and fruity.  Some the aromas we noted were Dark Cherry, Blueberry and a hint of spice.  Tasting the Cabernet Franc was excellent!  This wine was very full-bodied and lively.  The tannins were medium and could be felt in my mid palate and worked its way slightly to the sides.  The finish was medium to long.  Some of the flavors we noted were Blueberry, Cocoa.  I am sure this Cabernet Franc will only mature to an even greater wine with time!

Both Chris and I rated the 2007 Crocker & Starr Cabernet Franc four glasses!