I wanted to ride along and assist Chris while she met a couple of builder client option selection appointments today.  Her sales guy who calls on this national builder was not able to cover them this Saturday.  We got up pretty early to head down to Lakeville for the scheduled appointments.  Between the two appointments we had a nice lunch and by the end of the shift, she had sold around $4500.  Not bad for three hours of work!

On the drive home, I of course was already worried about my stomach and needed to know what was for dinner.  Chris had already planned to make Fajitas with some left over Beef Tenderloin, Chicken, and Shrimp.  That was definitely working for me!

We arrived home around 4pm after stopping at her office for some other unfinished business and Chris started prepping the food.  She asked me to go down stairs to grab the Wok so I decided to grab a bottle of wine as well!  I wanted to enjoy something from someone we have not had for a while.  With the upcoming cruise to Italy I thought about a bottle from Mitch’s pureCru.  Now that I had decided “who’s” wine we would enjoy, I then had to figure out which varietal.  It didn’t take long to decide on this bottle of 2007 Cabernet Sauvignon. 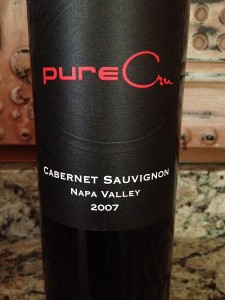 As I brought the bottle up, Chris immediately smiled.  We have never had a bottle of wine from Mitch that we did not like.

As Chris was finishing up and plating the food, I new it was time to pull the cork.  I poured us both a glass and grabbed my tasting sheet to make notes before we ate.  The Fajitas were smelling amazing so I knew I only had a few minutes to write down my thoughts before it was time to eat. 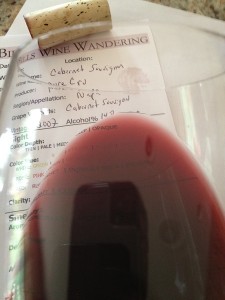 It is known that 2007 was a great year for California wines!  I agree.  You may recall, that season started with a warm winter followed by a warm and dry spring so the grapes got off to a great start.

It was time to rate the 2007 Cabernet Sauvignon from pureCru.

As I look at the Cabernet the color depth was medium.  It was a nice Garnet color and  very clear in the glass.

When we smelled the Cabernet the aroma was medium to aromatic and smelled very young.  Some of the aromas I noted were Vanilla, Cherry and Blackberry.  We have to say Mitch does a great job picking the way he has the wine barrel toasted.

We both decided to enjoy a sip while waiting for the Fajitas to be ready.  As we tasted the wine it was off dry.  It was medium to full bodied, and the acidity was very balanced.  The tannins were medium to soft with a long finish and were felt from the front of our tongue wrapping around to the sides.  The 2007 Cabernet was very flavorful.  Some flavors tasted were Raspberry, Vanilla, and bright fruit.

It was not hard to rate the 2007 Cabernet Sauvignon four glasses.  I would definitely give this one a try!

The Fajitas and Cabernet Sauvignon paired great together. 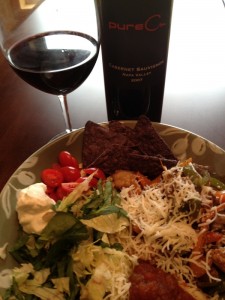