Chris and I were recently hosting our “Winers” group at our house, where a good group of folks interested in wine get together at least monthly to socialize and share great food, wine and camaraderie.  At the last Winers night, I instructed everyone to skip bringing wine because I had a 6.0L bottle of 1998 Cosentino Cabernet Franc I wanted to share.  The six liter bottle holds eight bottles in volume, so I needed to have some experienced wine drinkers come over and help! 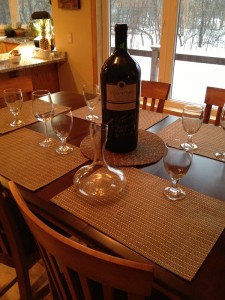 The table was set awaiting our guests. 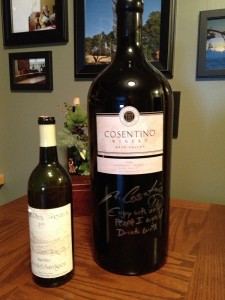 I took this picture along side of a 750ml bottle so that others could get sense of the
size of the 6.0L.

We had Mitch Cosentino sign this bottle when we bought it.  I like the saying he wrote “Enjoy with only people I would drink with”.  We had the right people.

Dave and Heather were the first couple to arrive and it was time to cut the wax around the neck and pull the cork.  Once the wax was removed I could see the cork was showing its age. 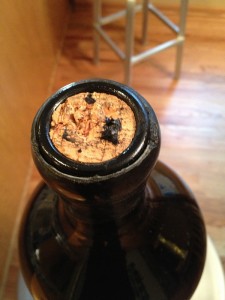 I had some difficulties with the cork when I initially tried using a traditional cork screw.  I could tell that it would likely remain intact as I pulled upward.  I then decided to use my “Ah-so” corkscrew to be safe.  I inserted the Ah-so into the cork and started twisting and pulling slowly and after a few attempts the cork broke into two pieces.  I went back to using the original corkscrew again and this time I pulled out the remaining cork.  I was relieved because I did not want to use a filter in the event that there would have been a need to remove the broken cork.

Once the cork was removed I poured some of the 1996 Cabernet Franc into my decanter.  I also poured Dave, Chris and myself a glass.  I had a few minutes remaining before everyone else showed up so I decided to grab my tasting sheet and rate the Cabernet Franc.

Sight
The 1996 Cabernet Frank was showing age, but the color depth was medium and clear.  The hue was garnet to bricky.  Notice the half broken cork behind the glass? 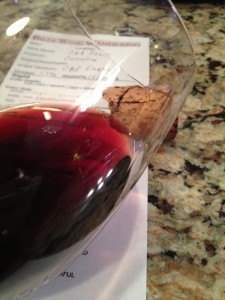 Smell
For it’s age it was still very aromatic but smelled middle age to me.  The aromas included plum and ripe fruit.  There was a floral bouquet and a slight mineral nose as well.

Taste
The Cabernet Franc was not dry.  It was medium bodied and slightly tart.  The tannins were there but were soft and it was very flavorful.  We could taste light fruit and it was velvety with a long finish.

We rated the 1996 Cabernet Franc three plus glasses!

Right around 6:00pm the other guests, Lois, Richard and Sylvia and Dwayne arrived at the same time.  Minutes later the girls were prepping the appetizers and I was pouring wine.  As usual we enjoyed the night with these great friends!  We spent some time visiting about the upcoming Napa and Sonoma trip in May that some of them will be joining us to again this year.  We are all looking forward to a wonderful trip! 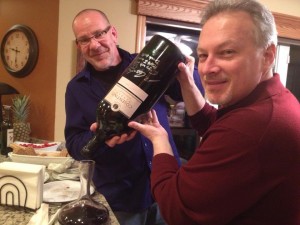 By 9:30pm we had poured the remaining 1996 Cabernet Franc into the decanter.  We did not waste anytime enjoying this wine!  There was a lot of water consumed between the multiple glasses of wine.  Some other time we plan on offering our 6.0L of Cosentino Merlot to see how it compares to the Cabernet Franc.  I am pretty sure it will be a part of our next hosting!