I needed to go to Colorado for a business trip.  I try to get out to the Longmont area every couple of months for customer face time.  I also need to spend time with my co-workers so I stay in sync with the day-to-day operations.

As I was booking my ticket I asked Chris if she wanted to come with.  The price for a Delta ticket to Denver from Minneapolis was cheap so she, of course, said yes and booked her ticket!

Our flight was Monday morning and it was a good thing we arrived before 4pm.  We are pushing the second week of April and here came another snow storm.  By the time we reached Longmont, the winds had picked up and were blowing around 40 miles per hour.  The flight in with those strong wind gusts would not have been fun!

The following day, unfortunately, was a light day in regards to work.  The winter storm hit, and the roads were pretty bad.  Half of the guys I work with did not come into the office and my customer also stayed home so my Tuesday meetings were a bust.

Wednesday was pretty calm as the storm had blown through and the roads were dry again.  I attended a few customer meetings and spent time in the lab which was productive.  So the trip was worthwhile.

It was the end of Wednesday’s work day and my co-worker mentioned happy hour at a local restaurant called SugerBeet Eclectic American Cuisine.  We have taken our customer there many times over the years and they have great food.  Chris and I arrived at around 5:15pm and Mark shortly thereafter.  We enjoyed a glass of wine and a couple small plates before Mark had to leave.

Chris and I decided to stay and have dinner.  I reviewed the wine list and there were many that I was not familiar with.  Their wine list is honestly not the best, but you deal with what you’ve got when you’re thirsty!  After a few additional minutes, I decided we would try a bottle of 2011 Charles Smith Boom Boom Syrah since Syrah is Chris’ favorite varietal.  I’m always working on those brownie points! 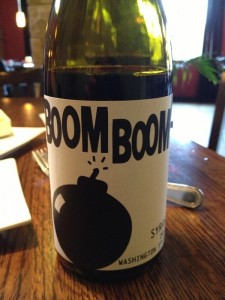 The Boom Boom Syrah is a wine from Charles Smith of Columbia Crest out of Mattawa Washington.  The Charles Smith Wine brand was themed as “The Modernist Project,” which focuses on the way people generally consume wine today: immediately. The intent was (and still is) to create wines to be enjoyed now, but with true typicality of both the varietal and the vineyard.

After choosing our wine, we ordered our meal and our server brought us the bottle of Boom Boom.  She pulled the cork and poured us both a glass of Syrah.  After she left a wrote down a few notes on the wine. 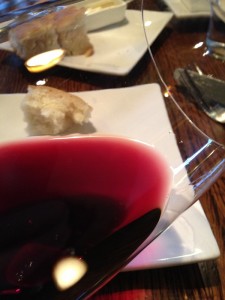 Taste
Slightly tart but it worked with the foods.  The syrah was not full-bodied and the flavor intensity was medium with a medium finish.

We did not finish the bottle and I had it corked.  Back at the hotel watching TV I decided to finish it.  Again it was just “ok” and I would recommend drinking wine with food.

We held Chris' company Christmas party early December so we…