We have been spending a few days to a week with our friends in Seattle after Christmas.  My employer and Chris’ company conducts a shutdown.  This gives Chris’ employees the opportunity to spend time with the family.  Besides, the week between Christmas and New Years there is very little office work and the phone remains silent.

Prior to our trip to Seattle, Pete suggested we spend some time in Walla Walla.  None of us have visited there so that was a great idea.  This gave me the opportunity to start researching wineries and ask friends for recommendations who have been there.

So where is Walla Walla?  Walla Walla American Viticulture Area (AVA) is at the south-east part of Washington State and is also in Oregon. 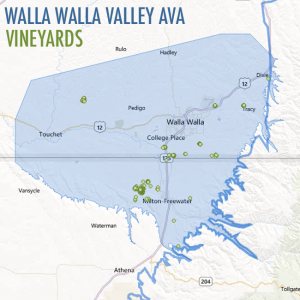 Well, that was easy to remember, they have four regions.  We had two days so I decided to break the regions into the west, north (downtown), and finally south and east.  The west side wineries are the farthest from downtown and we were staying a couple of miles from there.

Here is my breakdown of areas and wineries:

I think it is a very complete list.  Hopefully we can visit most. 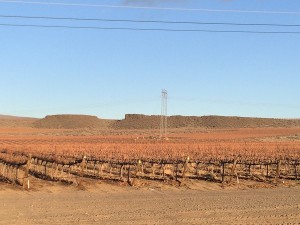 We arrived in Walla Walla Saturday night.  With a good nights sleep, we were on the road after 10:00 am.  The drive from the hotel to the first stop L’ Ecole was about thirty minutes.  We visited the farthest first and worked our way back. 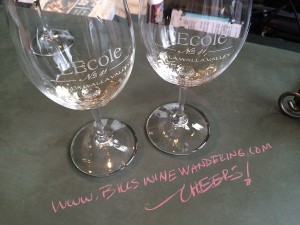 I thought the white wines taste better than the reds.  We purchased the 2013 Semillon Columbia Valley and 2011 Merlot from Columbia Valley.  As we were leaving the tasting room recommended the winery next door.

Woodward Canyon Winery
The tasting room is open daily from 10:00 am till 5:00 pm.  A tasting fee of $5.00 per person which is waived with the purchase of a bottle of wine. 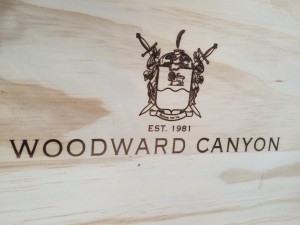 Unfortunately, they were not pouring their reserve wines this day.  The hospitality guy said they assumed a low turnout due to the holidays. 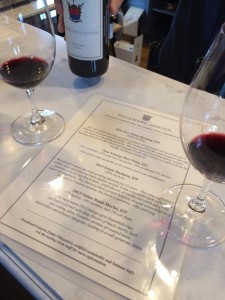 The Estate Barbera was good.  The others I was underwhelmed.   I wished we could have tried the Reserve wines. Pete and I bought the 2012 Estate Barbera.

Next stop was Waterbrook Winery
The tasting room is open daily from 11:00 am till 6:00 pm.  A tasting fee of $5.00 for the normal wines and $10.00 for the Reserve wines.  The tasting fees are waived with a purchase for each tasting. 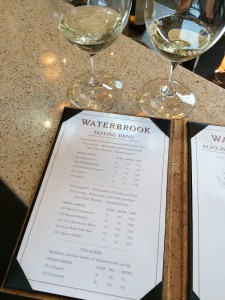 We all felt the Reserve wines were a lot better than the Value wines.  Many times we dumped after the first taste.  We bought the 2012 Reserve Chardonnay and the 2011 Rhone Blend.

I was surprised to see we had to pay for our tastings even though we bought wine.   I feel if you buy wine the tasting fee should be waived.  Maybe it was a mistake.

After this tasting, we decided to bypass the rest of the west and head downtown to eat and try the North Wines.

We had a great lunch at Graze.  With a great base, we were ready for the downtown wineries.

The first of the Down Town wineries was Charles Smith wines 7 K Vintners.
The tasting room is open daily from 10:00 am till 5:00 pm.  I did not see a tasting fee.  I am sure there is a small one. 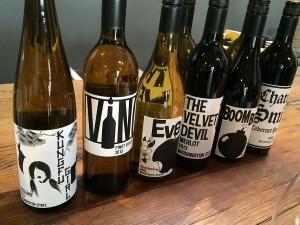 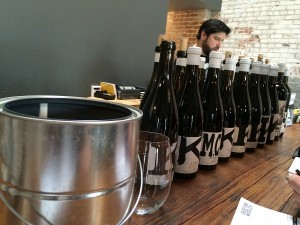 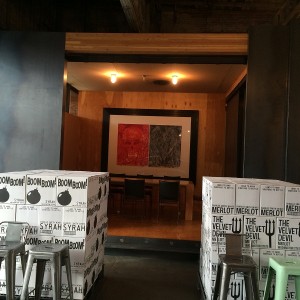 Very open and large tasting room.  It was very warm and welcoming. 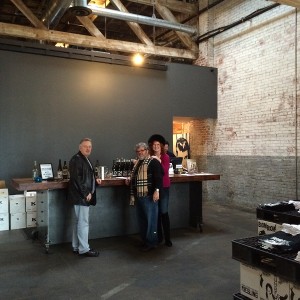 Overall the wines were pretty good.  Some better than others.  We did purchase a 2012 K El Jefe Tempranillo – Wahluke Slope bottle and a King Cole Black T-shirt ($25.00).

We left our car and wandered to the rest of the wineries.  As luck would have it.  The following tasting rooms were closed due to the holidays or till spring; Maison Bleue, Rotie Cellars.  We wandered on to find more… 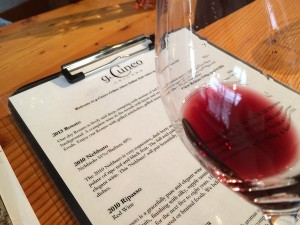 We did not buy anything, Pete bought a bottle of the Nebbiolo.

There were two tasting rooms open next to Gino so we visited them and finished our day.

Spring Valley Vineyard
The tasting room is open daily from 10:00 am till 4:30 pm.  I did not see a tasting fee.  I am sure there is a small one. 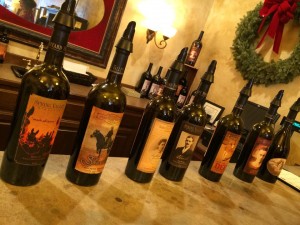 The wines are named after family members of the proprietors. 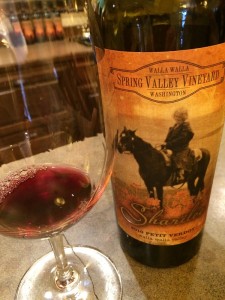 All of the wines were good.  The winemaker knows what he is doing.  We all bought a bottle of the Uriah Red blend.

Next to Spring Valley was Trust Cellars 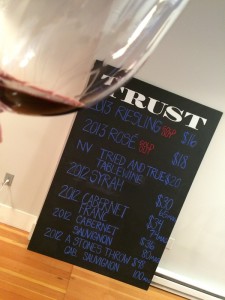 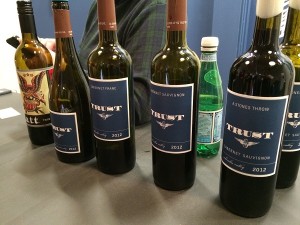 I found it interesting that many wineries in this area are releasing their 2012 red wines now.  Most of the wines were bottled last spring or early last summer.  I would hold the bottle one year to eliminate potential bottle-to-bottle variation.

End of day summary.  The west end wineries left us underwhelmed for the most part.  Wines were hit or miss that we tried.  The downtown (north) wineries were a lot better.  Not one of the places we visited offered or even talked about their wine club.  I find that odd….

We left the hotel around 10:00 am and visited Starbuck’s coffee.  Drinking our coffee we reflected on the day prior and we all hoped the wines today were better.  The temperature was diving.  Highs just below the freezing mark with snow flurries. We were going to be pleasantly surprised… 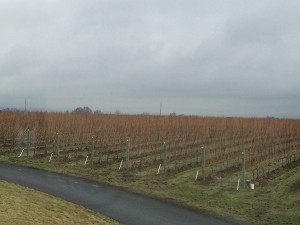 Our first stop was Pepper Bridge Winery
The tasting room is open daily from 10:00 am till 4:00 pm.  There is a $10 per person tasting fee which is waived with the purchase of a bottle of wine.

We were met by Karen who did a great job talking about Pepper Bridge and their wine club. 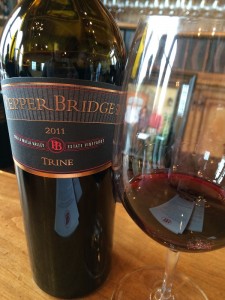 All three wines were great.  We did purchase a bottle of the 2012 Merlot.  They have four wine clubs.  The one I found most interesting is the Vine Club.  If you want to know more about Viticulture this could be the club for you.  It does require you to attend the estate on a pre-selected date in the fall. 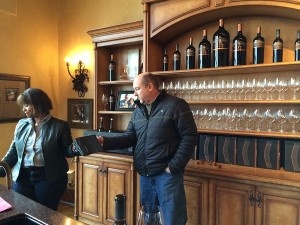 Winemaker JEAN-FRANÇOIS PELLET picking up and taking a couple of bottles of wine.

Details from the website:
Interested in furthering your knowledge of wine growing and fine wine? Do you want to see for yourself that the majority of the winemaking process happens in the vineyard? If so, join our Vine Club. In what we believe to be a truly innovative project, Pepper Bridge Winery sells vines to our customers at the cost of $150.00 per year (per person). With membership, you receive:

Our next stop was Northstar Winery
The tasting room is open daily from 11:00 am till 4:00 pm Sunday and 11:00 am till 5:00 pm Monday through Saturday.  There is a $7 per person tasting fee which is waived with the purchase of a bottle of wine. 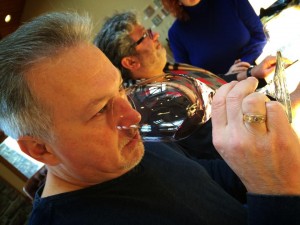 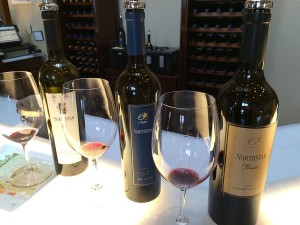 Our next stop before lunch was Va Piano Vineyards
The tasting room is open daily from 11:00 am till 5:00 pm.  There is a tasting fee which is waived with the purchase of a bottle of wine. 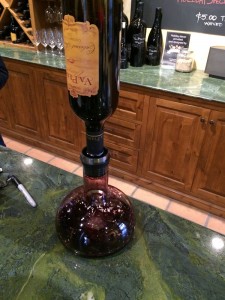 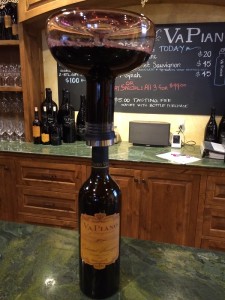 New bottles are decanted prior to pouring.  A very interesting decanter.

By far the best wines we have tried so far!  They have another series Black Label.  The Black Label Series club is fairly new any is open to 250 members only. 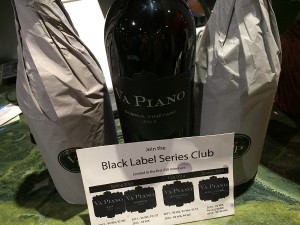 We left Va Piano Vineyards happy.  It was time for lunch and we could not wait to try others.

We returned with happy stomachs and visited two more wineries before it was closing time.

Amavi Cellars
The tasting room is open daily from 10:00 am till 4:00 pm.  There is a $5.00 tasting fee which is waived with the purchase of a bottle of wine. 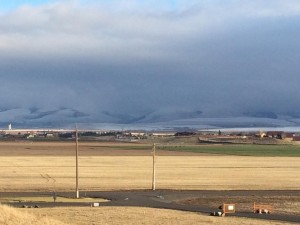 View from the tasting room

Amavi Cellars is part of the Pepper Bridge family. 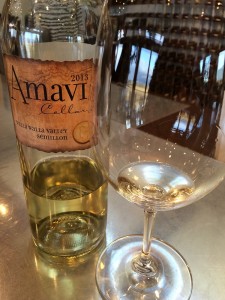 We purchased a bottle of the 2012 Ceres.  I will hold this bottle for a couple of years.  As we were leaving the tasting room recommended we visit the winery on the bottom of the hill.

The final winery was Flying Trout
The tasting room is open from 10:00 am till 4:00 pm Thursday through Monday.  We did not see a tasting fee at the tasting room that I could recall.

This was a fun tasting.  In the tasting room, that day was Ashley Trout, the winemaker.  So we asked why the name? Years ago she had the opportunity to travel to Argentina for a summer internship.  Arriving there she did not have a job as promised.  She eventually found work at wineries.  Many of the viticulture students she befriended now hold winemaking jobs in Argentina.  So “Flying” refers to travelling to and from Argentina and working there over the winter months.  It was a fun story…

All of Ashley’s wines are a Malbec blend. 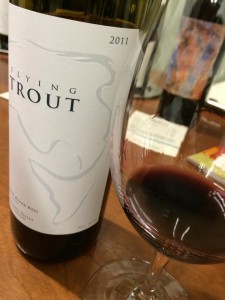 Pete and I both purchased a bottle of the Deep River Blend and we asked Ashley if she would sign the bottle.  She obliged and we ended our final day on a positive note. 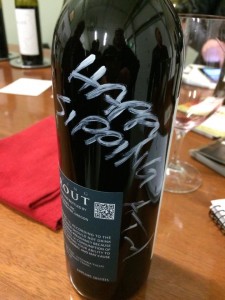 Day two summary.  The south side wineries are by far the best in my opinion.  I will focus my time on this area and try East side wineries during my next trip.

I really enjoyed my time in Walla Walla.  If you visit I would plan at least four days to taste the various wines.  We had a designated driver each day so please make sure you do the same when you visit.  There are drivers for hire if you need.  Most of the hotels and wineries have Walla Wall wine guides.  Grab a copy the day you arrive and plan your visit.  Once you have your list check to see if the tasting rooms are open.  If you want something special call ahead and setup a reserve or private tasting.  Every winery on the south side talked about their wine clubs.