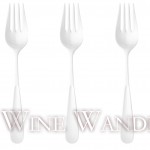 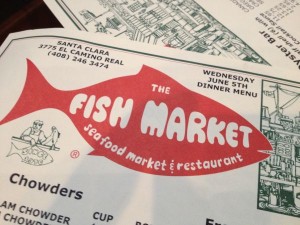 Neighborhood: heart of the Silicon Valley
Cuisine: Seafood
Cost: $$ ($25 and less – Moderately priced)
One Fork = I would probably not eat here again, because the food is hit and miss

One Fork = I would probably not eat here again, because the food is hit and miss.  I don’t have a “Zero fork” rating, but think that I may have to generate one, which means “I wouldn’t go back!” after this experience.

We had visited here on a prior trip to the Santa Clara area.  Originally, it had been recommended by our friends who used to live near and had liked it.  We couldn’t recall anything special, but after reviewing the menu we decided to give it another shot.  Their website claims that “The Fish Market and its upstairs, is an upscale Top of the Market rate as probably the most successful restaurant on the California Coast.”  We would have to disagree!  We felt it was more like a large fast food place.   The founders – a sport fisherman, and his business partner, boat captain and gourmet cook colleague – teamed up to open The Fish Market in 1976 with the thought of serving the freshest, highest-quality seafood available, simply prepared and served at fair prices.  They have since expanded to six restaurants in California.

We frequent the Silicon Valley as Bill has work here.  We wanted a nice dinner out and the images of the cuisine on line looked alluring.  Unfortunately, the food we were served looked nothing like what we had envisioned.  And while their listings of the “signature fish market seasonal and/or regional offerings” sounded tasty, our experience was less than desirable that day.  The environment is casual dining but the hustle and bustle in this seafood house a bit too loud.  The restaurant features a bar and lounge area (where we had eaten during our first visit), a full-service oyster bar with counter seating, a retail seafood market and their signature mesquite wood broilers.  What was fun to look at were the original vintage photos along the walls throughout.

Upon arrival parking was a bit of a challenge and there were a lot of people waiting in the host area – which actually had our expectations high at this point.  But now that I’ve read the history off the website, I’m sure the owners would have been embarrassed at the quality of the food presented to us.  It reads: “Our entire staff is committed to providing each guest with the upmost in courteous, attentive service and superior seafood knowledge.”  Well, not at this location and not during this visit!

Our server Lisa P was efficient and explained that the menu is updated three times daily – so what we saw, was what was available.  There was an abundance of items to choose from including chowders, sashimi and sushi, salads, oyster bar items, appetizer specials, fish and chips, seafood cocktails, smoked fish, tacos, and steamed shellfish.  They also offered pastas, mesquite grilled or pan fried items;  There was crab, lobster, chicken and steak and a bunch of stuff that would sound appealing to just about any audience such as onion rings, wok charred edemame, sweet potato fries, garlic toast and some more…  Being that the joint is raving about the quality seafood and we’re from the Midwest, fish it would be!

We shared a Wedge Salad – crispy iceberg wedge, Danish blue cheese dressing ($7.75) Then we read “add bacon 0.95”; really?  Doesn’t the wedge always include bacon?  None the less, we were pleased when she brought it on two separate plates already been split. 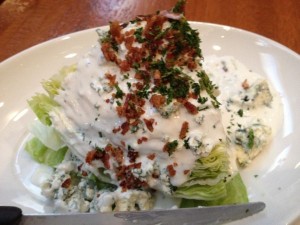 The salad was very good, with crisp fresh lettuce.  The blue cheese was a bit pungent, but that is right up Bills alley and paired well with the wine were were sipping.  The dressing was made fresh and overall was exactly what one would expect for a simple, but fresh salad. 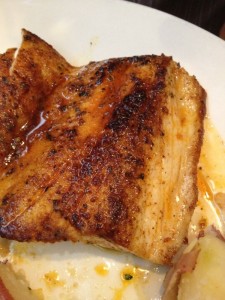 To their credit, his piece of fish was actually very good.  Each of our entrees included our choice of two sides (from Au gratin Potatoes – Parsley Potatoes – Steamed or Roasted Vegetables-Fishwife Rice- Coleslaw – French Fries – Cherry Tomatoes with Basil) of which we both opted for the parsley potatoes and roasted vegetables. 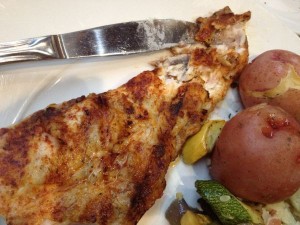 To my dismay, I was served a thin tail end.  I immediately reported that I was not happy with the look of the portion.  Not only did I feel “jipped” after comparing my piece of fish to Bill’s beautiful, thick fillet – I explained had concerns that these types of cuts often risk tasting “fishy”.  She left it with me to at least have the sides to chew on, but they too were nothing to be desired. 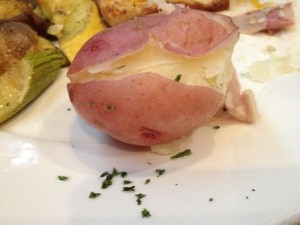 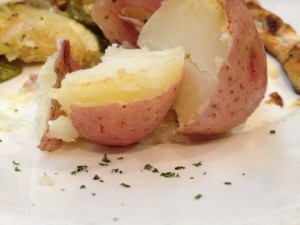 The potatoes were dry and flavorless.  We had to laugh (and take photos just so you could too) when we saw the “parsley” flakes that accompanied them.  Seriously, fresh herbs would have been “the emphasis is on freshness, high quality” that they boast about.

Our server had described the roasted veggies as “fresh zucchini, onions and red peppers roasted”. 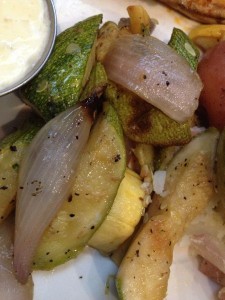 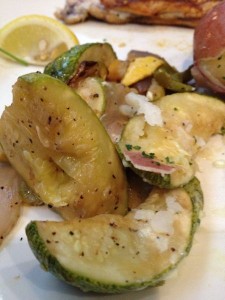 Well, there wasn’t a single red pepper in any of our servings and while we don’t mind soft onions, the squash was cold and mushy and completely uneatable.  We had hoped for firm, fresh vegetables that were caramelized in goodness…  In a recent post from another quality restaurant in the area, I described the squash we had eaten as “cooked perfectly al dente and the firm textures keep you interested and wanting to go back for more.” – These were the complete opposite of good and what a disappointment they were.

During the waiting period for a new entree, I was really getting hungry and did taste the fish tail piece that was left behind.  It was actually pretty good in flavors, but I would expect a fillet for the price.  I also noticed numerous small plates or appetizers being delivered to the table of two men adjacent to us and wished I was sitting with them to share theirs;  I did ease drop a bit and I’m convinced they were not pleased with their starters either.  It looked like they ordered some oysters, the smoked fish crostini trio of salmon, trout, albacore and artichoke tapenade ($6.95); and the Bay Scallop Ceviche – avocado, tortilla chips ($7.95) but the entire dish of ceviche went uneaten and was sent back to the kitchen. 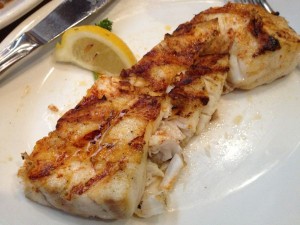 With what seemed like sincerely apologies, Lisa presented me with a second fillet of seabass.  I was a bit concerned and wondered if I made the chef mad because it looked like it had been in a fight.  There wasn’t much hope for her as she tried to appease us offering to replace the icky sides. 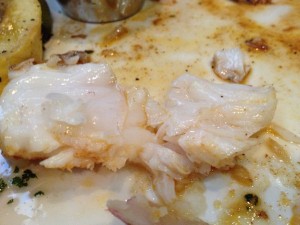 To conclude the dinner service, this fish was raw!  We were done and we couldn’t eat any more.  There was really nothing that could have convince me that something else was going to be prepared any better.

Eventually, after I had to suggest it – a manager named Loretta stopped at our table because I think she really didn’t have any other choice.  She told us several times that the chef shouldn’t have served the tail piece and rather than apologizing, made recommendations of what we should have ordered or might choose next time.  Yes, really.

We listened to conflicting “who done it’s” and who’s fault it was before the manager reluctantly offered to comp our meals ($59.92) while we would still pay for our wine.  (Which we sat and finished). 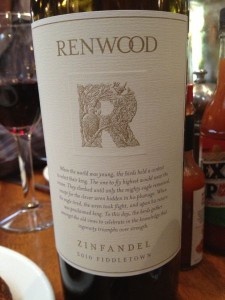 Desert:  I’m pretty sure we weren’t even offered any.

We just don’t think it was a “fluke”.  You almost can’t do that many things wrong in one sitting.  We have a simple word for this experience “BOO!”