This blog is about our third day of our amazing Mediterranean cruise.  We arrived in Livorno, Italy and I was really anticipating the days tour because the wines were to be a part of the Tuscan region.

The tour participants all met in the lounge at 8:15am.  There were about 30 people who were attending the event and the majority of them were the same people who met up during the pre-cruise tour that took us to Castello delle Regine in Umbria Italy.

The first stop of the day was at the town of Suvereto, which is a splendid medieval village whose origins date back to before the year 1000.  Situated in the slopes of the hills overlooking the Costa degli Etruchi, it is a true jewel, rich in history and art, set in the green valley of the River Cornia.  Thick cork, chestnut and oak woods, and Mediterranean scrub grow down to the sea.  The Wine Route winds its way through countryside rich with grapevines and centuries old olive trees.  The region is swarming with agricultural enterprises, oil mills, wineries, and farm-holiday resorts where you can try local products and local dishes. The town keeps its antique traditions alive through magical festivals inspired by history and folklore that are helped throughout the year, thanks to the mild climate.  Suvereto is a slow food city, wine city and olive oil city. 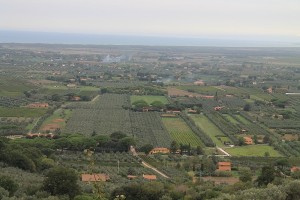 One of the spectacular views from up top the mountain!

We started our wine adventure in a small restaurant trying some of the local wines that were paired with a nice cheese platter along with bread with olive oil.  During the tasting we were served three local wines; one white and two red. 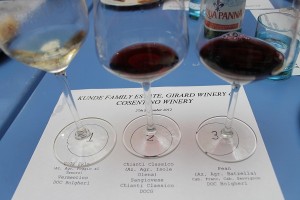 The white wine (Vermentino) was excellent!  It was balanced and we found that it was not too sweet.  The acidity was right on and I believe that you could drink this one with no food on a bright sunny day (a cloudy one would work too).  The first red white was Chianti Classico and even though it was young, it was pretty good but it needed more time in the cellar.  The final glass was a blend of Cabernet Franc, Cabernet Sauvignon, and Sangiovese (an attempt of a Bordeaux blend).  Chris and I concurred that we did not love this one.  It may in a few years open up and be brilliant?  After our tasting was done we ventured back to the bus for our next stop; Ornellaia in Bolgheri!  Overall, the tasting and experience was three plus glasses. 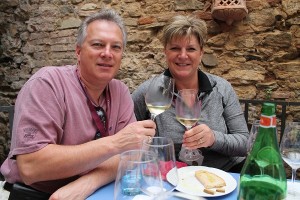 Off to Bulghari with a little history and information on this city:  Immoratalized in Giosue’ Carducci’s poem “Before San Guido”, “I cipressi che a Bolgheri alti e schietti van da San Guido in duplice filar …” (The cypresses of Bolgheri, tall and straight, march from San Guido in a double line…) this ancient village has a fascination all of its own.

A stone throw from the sea and surrounded by countryside where vines and olive trees thrive, this little town with its unspoiled architectural harmony is dominated by the red brick castle which guards the entrance of the village of narrow paced streets and old stone houses bright with geraniums.  Spectacular sunsets and darting swallows enliven the skies. Craft shops, wine shops and taverns offer traditional, local products.  The churches, the poet Giosue’ Carducci’s childhood home and San Guido’s oratory are fascinating to visit, while surrounding countryside with its holiday and horse breeding farms is the ideal place for walking, cycling or horse riding.

I was truly looking forward to seeing this small and quaint town after our visit to the winery Ornellaia. 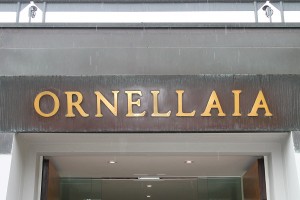 We were greeted at the entrance of the winery by our tour guide as the bus drove in and through the estate.  By the time we arrived it was raining lightly so everyone hurried into the building.  We were shown the wine making process from where it begins all the way through the bottling and shipping processes. 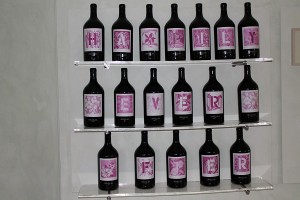 The bottles read: Happily Ever After 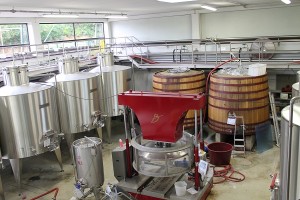 The de-stemmer, crusher and fermentation tanks. 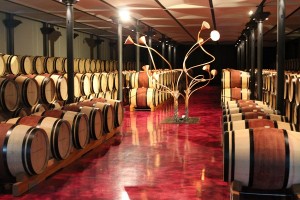 During the tour, we were shown where the grapes are de-stemmed,  crushed and fermented and we also saw the bottling room and one of the two rooms where the large french oak barrels are cellared.  Following, we were again loaded into the bus and headed to another location on the estate where we would be served lunch. 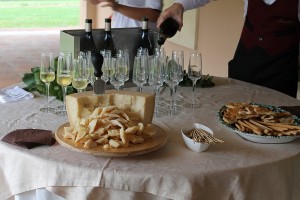 We were greeted by the Ornellaia staff outside the estate house near a large table that was covered with wine and cheese.  The white wine was called Poggio alle Gazze dell´Ornellaia, which is a Sauvignon Blanc and a touch of what I believe included a little splash of Riesling.  The Poggio alle Gazze dell´Ornellaia paired well with the sharp cheese!

After tasting the wine we escorted to the estate house for lunch.  Entering we noticed many beautifully prepared tables and were quickly served our first appetizer course along with Ornellaia wines that were poured and waiting to be enjoyed by us. 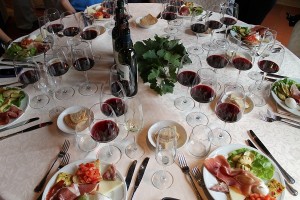 We were soon served the next pasta course. 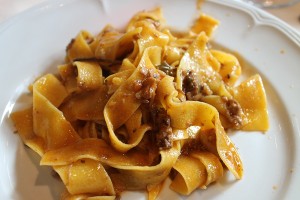 My favorite thing in the world is pasta!  The sauce was light and served with beef and a light sprinkle of cheese.  I did not waste any time eating the appetizer and trying the first wine; “Le Volte“.  Le Volte is the expression of a carefully crafted blend.  The softness of Merlot, the firm structure and depth of Cabernet Sauvignon supported by the vivacious personality of Sangiovese, create a unique blend which reflects the integrity and style which inspire the philosophy of the Tenuta dell’Ornellaia Estate.  I rated the Le Volte four glasses!

With the first glass being this excellent I could only imagine how the other two glasses would taste.

Le Serre Nuove dell’Ornellaia, is the  ‘Second vin’ of Ornellaia.  Le Serre Nuove dell’Ornellaia was first introduced with vintage 1997, resulting from the decision to carry out an even more rigid selection during the blending phase of the base wines which give life to Ornellaia. Produced primarily from the younger vineyards, the wine combines the pedigree of the flagship wine with freshness, accessibility and softness together with a structure, balance and intensity typical of the great terroir of the Estate.

Ornellaia, Tenuta dell’Ornellaia’s flagship wine, was first produced with vintage 1985, from an extremely careful selection of the vineyards grown on the Estate. Produced in limited quantities, hand-crafted and vinified with the utmost care and attention to detail, Ornellaia has constantly received top ratings from the most influential opinion leaders around the world. Vintage 2005 marked the 20th anniversary of Ornellaia which was celebrated with numerous events all over the globe and with the creation of special anniversary large size bottles.  I was told the flagship Ornellaia is being compared to Bordeaux’s “Petrus”.  To my surprise, we were offered more Ornellaia after my first glass was empty!  Trust me, we took advantage and enjoyed much more with our meal. 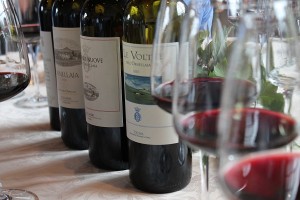 We finished our lunch with dessert and a glass of the Ornus dell’ Ornellaia.  As things were wrapping up, our host asked if anyone was interested in Grappa.  I immediately said “Sure!” I figured that I wasn’t driving, so why not try it!  The Grappa tasted pretty good and just like in the past Chris kept telling me that it taste like airplane fuel! 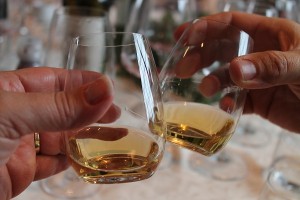 Once the lunch was finished and stomachs full, we were all very happy.  The wine crew with its host loaded into the bus and the final stop was the little town of Bulghari.  This little town was beautiful. 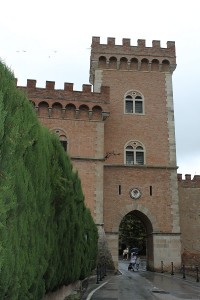 The town is wrapped within a stone wall.  Here is the entrance to Bulghari.

We discovered another excellent wine from the region called Sassicaia (pronounced Sa-si-k-ia) .  In the future there will be a blog about this excellent wine too! 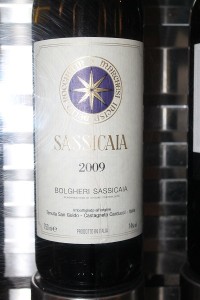 We wrapped up our tour day with an hour drive back to the ship.  Many people on the bus napped while several of us reminisced about the days stops and how excellent they were.  We knew that it would be hard for any other tour on this trip to match the quality and experience of Ornus dell’ Ornellaia.

I have created a short video of the Ornellaia tour.  If you would like to watch it click on the videos tab or here Videos.

One Reply to “Ornellaia & The Super Tuscans of Italy tour”