The first time Chris and I met Joe and Lisa was at their wine store a number of years ago the week before Valentines Day.

We were greeted by both Joe and Lisa as we entered.  They gave us a brief tour and explanation of the layout of their store and asked if we were interested in trying some wine.  Of course our first reaction was “hell yes“!  Moments later we were at the tasting table trying some wines.  It was not long before Joe pulled out a glass and told us it was time for him to join us.  After a couple tastes of a variety of wines, Lisa pointed us in the direction of their display for the monthly pairing that geared towards Valentines Day.  It was very creative and from that day forward we have remained good friends.

On the monthly display was the 2005 Merlot called “Hope” and the second wine “Romance”.  As you can see by the names there was a theme.  😉

As Chris and I enjoyed our first tastes, we both fell in love with the 2005 Hope Merlot.  This wine came from a winery called Hope Estate in Australia.  In the early days, this wine was our immediate “go to”, affordable wine.  As time progressed Hope Estate released a 2006 and 2007.  We did notice that we didn’t care for the later vintages as much as the original 2005 we enjoyed.

I kept a bottle of each vintage knowing someday I would do a vertical tasting of the 2005, 2006, and 2007 vintages.  Recently, I was surfing the internet and came across the website of Hope Estate.  I decided to read the wine makers notes on the three vintages that we still had in the cellar.  To my surprise, they recommended the wine be drank at the time of release and could be held up to five years.  Reading this article I knew it was time to see how they compared.  I sent a text to Joe and Lisa hoping that they would join us in conducting the vertical tasting on Good Friday. 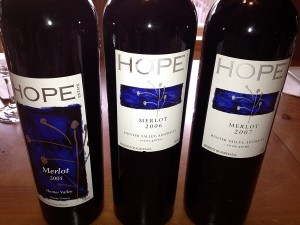 We were happy when Friday finally arrived.  I pulled the bottles from the cellar in the morning in anticipation for the tasting.

For us to have a fair comparison, we each needed to have three glasses that were the same shape and size.  We also enjoyed a bit of cheese and bread to sample after the initial tastes. 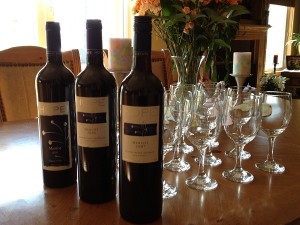 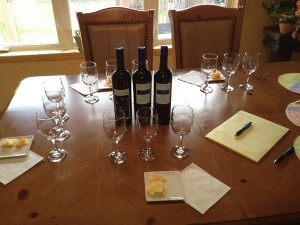 The table was ready with notepads and pens 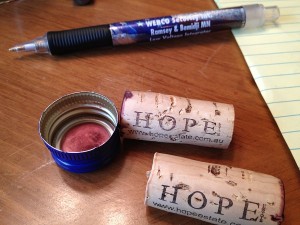 Notice that the 2007 had a screw cap, and the other two bottles had a real cork.  I’m not sure what your thoughts are on cork vs screw cap, (but that is another blog for another day!) Personally, I just think there is nothing better than the sound of a cork when it’s pulled out of a bottle! 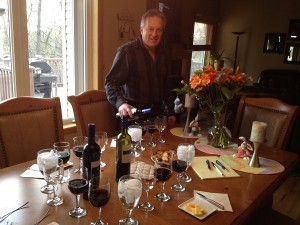 I was having an enjoyable time pouring the wines into the glasses.  Each of us had a generous sample of the wines.  On the left was the 2005 vintage, with the 2006 in the center and the 2007 to our right.  We were almost ready, but we needed to allow the wine about fifteen minutes in the glass to simply allow it to breath and hopefully “get happy”! 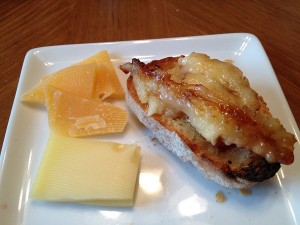 This is a view of our bread and cheese plate 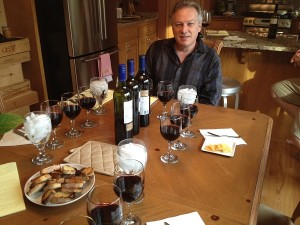 We were ready to begin!

Joe and Lisa arrived and it was time to sit down and see how we rated the wines.  We were all hoping for some good smells and hoped it tasted as good as we remembered. 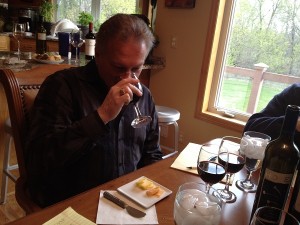 We decided to start with the 2007 and work back to the 2005.  None of the wines were really bold so we thought this was the way to go.  The 2007 had a nice nose.  As we tasted the wine we thought it was a little tart.  Honestly, I was getting a little nervous.  The 2006 was just “o.k.” and certainly not a favorite.  As we sampled the 2005 we were immediately happy and reminisced about the great smells and wonderful flavors!  It brought back some fond memories of the very first day we ever tried the 2005 Hope Merlot. 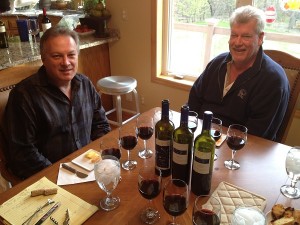 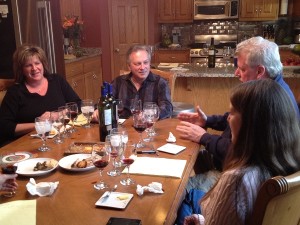 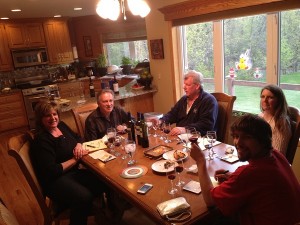 Michelle’s boyfriend Jake stopped by and got in on the tasting!

After we had completed the sampling of all three wines, we had mixed reviews.  It was really interesting to see how the quality and distinctive flavors of the wine changed over the three vintages.  The 2005 was really good, the 2007 was ok; however, the 2006 was very poor and we all ranked this vintage as the bottom of the three.

So how did the Hope Merlot’s rate overall?  Here are some of our brief tasting notes.

2007 Hope:
We could smell Black Cherry, Dark Chocolate and Spice.  It was a little floral.  Chris thought she could smell Washington Apple.  As we tasted the wine the tannin’s, they were felt from the front of our tongue to the back.  The finish was long and the wine was medium to full-bodied.  There was a Strawberry finish.

2006 Hope:
We noted Black Cherry, but no Dark Chocolate.  There was not a floral nose to this vintage either.    Lisa thought there was a hint of Raspberry.  As we tasted the wine the tannin’s were felt from the front of our tongue to the back.  The finish was short and the wine was medium bodied.  No one noticed the Strawberry finish like they had in the 2007.  We felt this wine was just missing something.  I thought the wine smelled just like grape juice. We all felt this wine was blah.

2005 Hope:
With this vintage, we could smell Black Cherry and Strawberry.  Lisa thought there was a hint of Raspberry too.  As we tasted the wine the tannin’s were felt from the front of our tongue to the back.  The finish was long and the wine was medium to full-bodied.  There was a Strawberry finish.

After we sampled all of the wines and rated them, we had a little appetizer.  Each of the wines were enhanced and tasted better with the Garlic Crustini and Chiptle Raspberry sauce and Brie that Chris made. 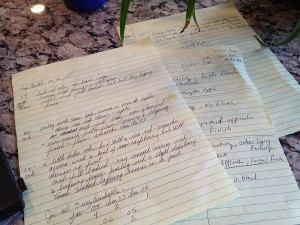 Unfortunately, that “Hope” may now remain in our past… Not one of us would search out and purchase the 2006 or 2007 Hope Merlot.  We discussed that if we ever found the 2005 in the liquor store and it was priced right, we would buy it again.