As I write this blog we are experiencing our first winter storm of the season.  Right now I can measure 6-7 inches of snow and it is still coming down pretty heavy.  My nephew and wife were suppose to fly home into Minneapolis from NYC today but thanks to the snow, they were redirected to Chicago and will be spending the night there.  Oscar from Beau Vigne was at our house Friday and also in Medina, Minnesota Saturday for another wine dinner.  I hope he was able to fly out because he had another wine dinner in Pittsburgh on Monday.  As I continue writing, now we have a foot of snow!  I also heard Oscar was delayed eleven hours and was redirected to Denver! 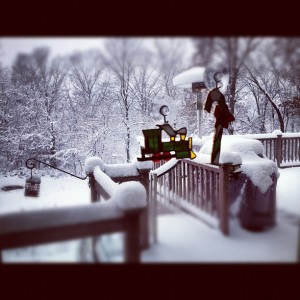 This was the first six inches of snow.

We scheduled our wine dinner with Oscar when we were in Napa last August.  I had been wanting to host a wine dinner and when the offer was on the table I was all in.

We started preparing for the event about two months prior to the scheduled event on December 7th.  We assembled a list of friends who enjoy wine.  Chris and I also had a minimum amount of wine that was to be purchased for the event, so we had to take that into consideration.

Our daughter Michelle put together the creative invitation.  As we suspected and hoped, most everyone responded with a yes.  We now had twenty three people including Chris, Oscar and I.

Since Beau Vigne has done this many times, Chris worked with Kate and Oscar for food pairing suggestions with the various wines.  We spent about two weeks refining the menu and the Friday before the event we were satisfied with our choices.  Michelle also assembled the attractive menu to forward to our guests along with a reminder. 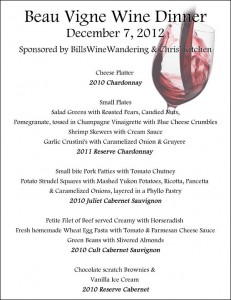 We spent the week of the wine dinner doing prep work in preparation.  The week flew by and it was finally Friday.  We began our morning with our normal workout and Chris got busy working in the kitchen.  Her food blog partner Laura planned to arrive around 1:30pm to give her a hand.  As Chris was cooking earlier in the day, I decided to hand wash all of the glasses, which was quite a task!  I ended up with a blister on my middle finger drying the glasses, ouch!  😉 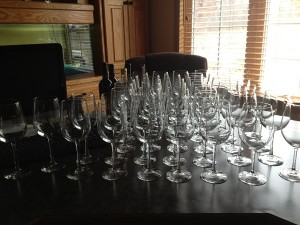 I loaded up my office desk with the glasses.

Oscar came over mid afternoon to setup a table and prepare the wines.  We chose to utilize the space for pouring the wines in our wine cellar. 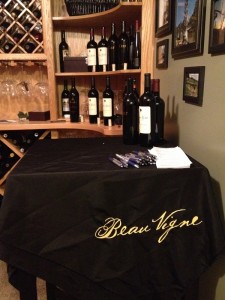 Oscar brought thirteen bottles and I had two additional bottles of the Reserve Chardonnay. 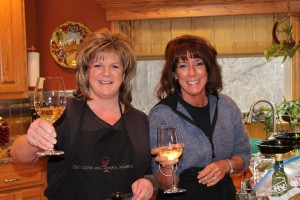 The girls are almost done with preparation, time for a glass of wine!

Our first guests arrived a little early at 6:30pm.  Oscar arrived at 6:45 and we decided to wait a few minutes longer before pulling the cork on the 2009 Persuasion Chardonnay.  Once the cork was pulled Chris brought out the cheese platter to start things out.

By now it was 7pm and most of our guests had arrived.  We had a little bit of snow late afternoon so the roads were a little slippery.  I was happy everyone made it safe and sound. 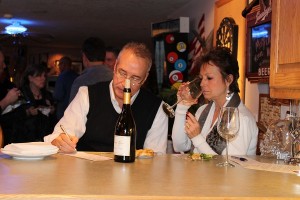 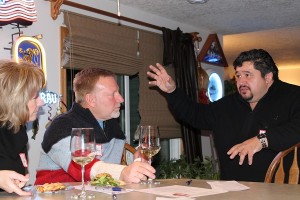 We started the wine dinner with everyone assembled near the kitchen table.  Oscar briefly talked about the history of Beau Vigne and than he proceeded to explain the first wine.  The first of five that night was the 2011 Reserve Chardonnay.  Since Beau Vigne does not have Chardonnay vines they bought some grapes from the same vineyard that won the famous French wine tasting in 1976.  If you are familiar with the “Bottle Shock” movie you will know who will know its the same Chardonnay in the movie.  This wine paired well with the creamy shrimp, roasted pear salad and the Gruyere onion crustini!  I rated the Reserve Chardonnay four glasses. 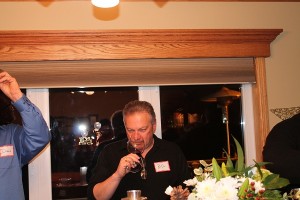 Here I am smelling the Juliet!

Second round started out with the 2010 Juliet Cabernet Sauvignon.  Everyone was quite impressed how well balanced and full bodied the wine was.  For a 2010 it was very drinkable now.  The Small bite Pork Patties with Tomato Chutney and Potato Strudel Squares with Mashed Yukon Potatoes, Ricotta, Pancetta and Caramelized Onions, layered in a Phyllo Pastry were excellent!  I rated the Juliet Cabernet Sauvignon four glasses. 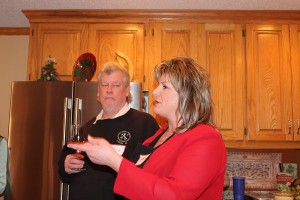 It was time for the 2010 Cult Cabernet Sauvignon.  Oscar told us how Robert Parker rates the Cult high and said this wine will be part of the next round “Cult” wines in the future.  As everyone was trying the Cult for the first time there was a lot of humming going on!  The Cult was served with the petite filet of beef served with a mild creamy horseradish, fresh homemade Wheat egg pasta Tomato along with a Parmesan cheese sauce, and green beans with slivered almonds.  Everyone was happy and Oscar was making his second round pouring the Cult.  Needless to say the Cult went fast! I rated the Cult Cabernet Sauvignon four glasses. 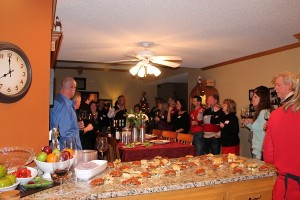 The third and final food served, was Chris’ chocolate scratch brownies and homemade vanilla ice cream.  Oscar started pouring the 2010 Reserve Cabernet Sauvignon and talking more about the Beau Vigne Estate.  Beau Vigne plants and harvests Cabernet Sauvignon from ten acres of land on top of Atlas Peak.  I find it quite interesting how the Cabernet’s (Juliet, Cult, Reserve Cab) differ from each other in the same ten acre lot.  That goes to show how the soils and environment in a small area can change and influence the Cabernet flavors.  The rich warm brownie with ice cream was excellent.  I did not see any empty plates.  I rated the Reserve Cabernet four glasses. 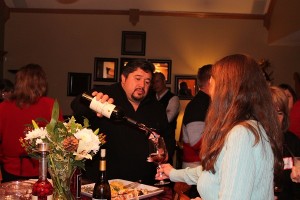 There was a final unexpected treat and Oscar offered us a small taste of the 2010 Guest Cottage Owners Reserve.  Beau Vigne only does one barrel of this special wine.  As Oscar started pouring the Guest Cottage he informed us they were sold out as of Friday morning.  Since there is one one barrel, I am guessing it produces approximately 55 cases and it goes fast.  I thought the Guest Cottage was really good but perhaps it needed some shelf time or to be decanted.  I truly thought the Reserve Cabernet was better.  I would like to open a bottle and leave it sit for a day.  I am guessing it would open up and become a gem like the other Beau Vigne wines. 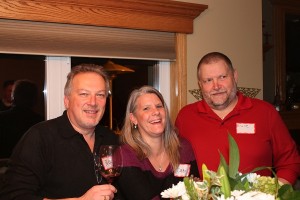 Many of our guests ordered wine while talking about how excellent the wines was, as was the food.  I think it was a successful dinner! 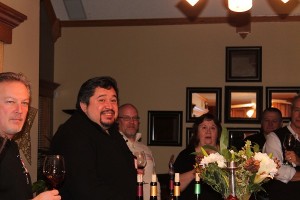 The following day I talked to Oscar and he summarized the orders.  Our guests purchased almost $3000 worth of Beau Vigne wines and another asked for Oscars cell phone number.  We were pleasantly surprised and Chris and I plan on hosting additional wine dinners in the future.  There are a couple things we may change but overall we were very pleased with the way things turned out.  I have a couple wine makers that I plan on reaching out to, to discuss potential wine dinners in the future at our home.

We enjoyed our time with Oscar and hearing about the Snider family and the fact that Ed was the football coach for St. Helena High School.  I hope during my next visit to Napa I am able to meet the Snider’s and the wine maker.  They make an excellent wine and I think Parker maybe on to something.  Next time you are in Yountville go look them up and say I sent you there.