It was Monday February 18th and I was not sure what I was going to drink this special day.  To be honest with you, was not really feeling much like drinking.  However, I figured since it was National Drink Wine Day I had to have something!

This day was also another “Smut night” (“The Bachelor”) on ABC and Chris, along with some of her friends were planning to come watch the show.  As luck would have it, Eileen brought a bottle of Chardonnay that she had bought at the local liquor store in Anoka.  She found the bottle in the discount rack so she was a little nervous and wanted me to try a glass to see what I thought.

Looking at the label on the back of the bottle, I read it was a white Vin De Pays d’Oc.  A Vin De Pays is a term known as “country wine”. 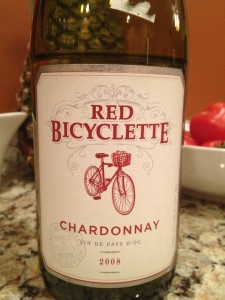 What you may not have known is there are six regional Vins de Pays, which cover large areas of France. The most volume producing contributor to this category of wines is Vin de Pays d’Oc, from the Languedoc-Roussillon area in Mediterranean France.  The second largest volume of Vin de Pays wines is produced as Vin de Pays de la Loire, a designation that applies to wines from the whole Loire Valley.  The others are: Vin de Pays du Comté Tolosan (south-west), Vin de Pays de Méditerranée (south-east, Provence and Corsica) and Vin de Pays des Comtés Rhodaniens (Rhone valley).  The Vin de Pays Vignobles de France has now been replaced by a table wine designation Vin de France, launched in August 2009.

With some additional Google searches I discovered the brand is a fairly new label for E&J Gallo.  http://www.redbicyclette.com/

Here are my tasting notes

Sight
The color depth was medium with a nice “goldish amber” hue. 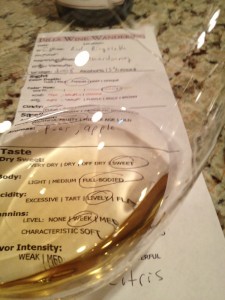 Smell
Very aromatic and youthful.  I could smell Pears, Apple and other citrus like fruit.

Taste
It was slightly sweet and medium bodied without any distinctive tannins, but very flavorful.  My initial taste was slightly buttery, with a finish towards the back of my jaw line that was slightly tart.  I did not notice any dominant fruit but citrus.  The finish was medium.

Over all, I was impressed with the Red Bicyclette Chardonnay  and when I was told Eileen only paid ~$6.00 I was very impressed!  It was another great discovery!