Tonight I had the rare experience of being on my own for dinner.  Chris had signed up for a Sushi class and had left the house by 5:00 pm.  I was in a meeting that ended around 6:30 pm.  By the end of the meeting my stomach was starting to tell me it was time to eat!  I’m not a good cook but I can do the basics.  I make a heck of an omelet, but I really didn’t feel like one, nor did I want to spent a lot of time figuring out what to make.  As my luck would have it there was a Gluten free pizza in the refrigerator freezer.

Their claim at Udi’s Gluten Free Foods, is that you’re buying a product that is free of gluten, but what you’re really getting is an innovative blend of quality, taste, and flavor.  Their mission is “to show you a new way to approach gluten-free living, and provide you with the tastiest gluten-free food on the planet”.  (I thought it was good, but also think Chris would have made it better; perhaps by crisping it up some more.)  In stark contrast to other gluten-free foods, which are often tasteless and crumbly, Udi’s creation, wasn’t half bad. 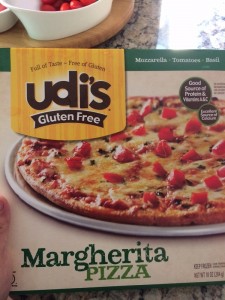 I doctored up the pizza slightly and with the oven at 400 degrees I put the pizza in.  Once my meal was figured out I needed to see what kind of wine I wanted to pair with it!  I had fourteen minutes to go and was feeling a big red.  I wandered down to the cellar and after pulling some bottles I decided to try the 2008 Aloft Cabernet Sauvignon. 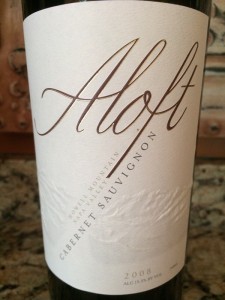 Reading the back of the bottle I was intrigued to learn that it was a Howell Mountain collaboration of Peter Mondavi, his wife and two sons.   The 2008 Cabernet Sauvignon is the inaugural release for Aloft; and it was great! 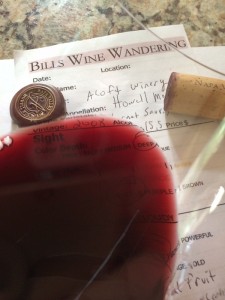 Smell
The Cabernet Sauvignon was moderately aromatic and development was youthful-fruity.  I could smell spice, dark fruit, cocoa, tobacco.

Taste
This wine was dry, full-bodied, and the acidity was good while the tannin level was medium with a slight astringent characteristic.  Tasting it, I had rich mid-palate flavors with a medium to long finish.

How much:  The wine was a gift.  Looking online the wine should retail for $150.00 per bottle.

My initial rating for the 2008 Aloft Cabernet Sauvignon was three plus glasses.  As the wine sat in my glass and evolved it was clear it should be a four glass rating.  I would recommend you decant and let it sit an hour prior to drinking it.

Back to the meal…   The think the star was clearly the Cabernet Sauvignon.  I should have left the pizza in the oven five more minutes because the center of the pizza crust would have better a bit more crispy like the edge. 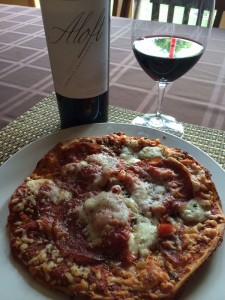