During the month of April, Chris was the Cosentino Winery Facebook fan of the month.  When she was first approached in March she immediately said yes.  Can I say she was really excited.  They even put her face on their Facebook page. 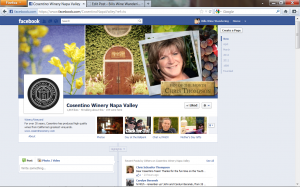 A few weeks after Chris was approached to be the fan of the month, she was also invited to participate in an online conversation with Mitch Cosentino via the ToutSuite Social Club.

To watch the interview of Mitch with Chris and a few other fans here is the link:

The interview is approximately one hour long so allow yourself the time to watch and enjoy the conversation.  I would recommend a great glass of Cosentino wine as you watch the video.

The day of the interview was here.  We had to prepare her laptop and make sure it would be able to stream the audio and video from our internet service provider.  Prior to the interview we had the laptop ready.  Chris wanted to have her back drop facing our nice wine cellar.  Now we needed to have a glass of wine.  Of course we new the wine was going to be a Cosentino wine, but what? I decided to grab a 2006 Napa Valley Cabernet Sauvignon. 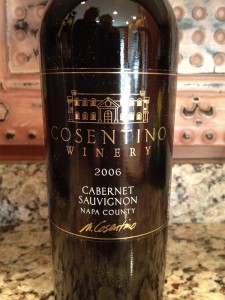 We had about fifteen minutes so I cut the foil and pulled the cork.  If I have not told you before, I truly enjoy pulling a cork from the bottle.  There is something about the “pop” when the cork is removed from the bottle.  I poured both Chris and I a glass. 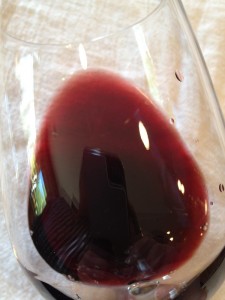 It was time to see how the wine held up in my cellar.  As we inspected the Napa Valley Cabernet Sauvignon the color depth was medium.  The wine was very clear and had a Garnet hue to it.  Smelling the Cabernet the aroma was not intense.  The Napa Cabernet smelled very fruity.  We could smell Bing Cherry, Plum, Black Cherry and a little bit of Oak.  Tasting the Napa Cabernet it was a little dry and full bodied.  The tannins were medium.  It was very flavorful.  Some of the flavors we could taste were Cherry, Blackberry and a hint of Anise.  The finish was long and we really enjoyed it.  I filled my glass and left the bottle with Chris in the cellar.

It was time for the ToutSuite Social event.  The social event started with Mitch hitting a couple golf balls out back.  Entering the building Mitch and the host were greeted with a couple fans in the room along with Chris and two other people live over the internet. 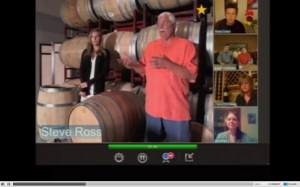 I was intrigued to find out Cosentino Winery had a barrel of Diamond Mountain Cabernet in the Grand Vin Barrel Tasting room.  There have been some amazing Cabernet Sauvignon’s from this mountain.  I would recommend you hunt out a wine from Diamond Mountain.

Each online guest was given the opportunity to ask Mitch a question.  I think Chris has a million questions for Mitch.  She eventually asked Mitch what was the difference between the MCOZ and The Poet. 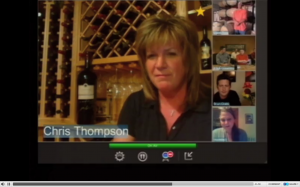 Chris concentrating on Mitch’s answer to the difference between MCOZ and The Poet.

Back to the wine…

Chris and I both rated the 2006 Napa Valley Cabernet Sauvignon four glasses.  If you are looking for a wine club to join, Cosentino Winery has a great club.