Chris and I had heard of a Wine Bar in Osseo Minnesota called Nectar Wine Bar & Bistro.  For a couple of years we had driven by at various times, but each time, unfortunately, Nectar was not open.  A couple weekends ago driving through Osseo on our trek back from Maple Grove on a rainy weekend, we decided to do another drive by for a quick snack and a glass of wine…

As we drove by it initially looked like they were open….  We entered only to find out we were an hour early from their regular opening hours and we learned that they generally open the wine bar at 4:00pm.  Since we had not eaten lunch this day, I was hungry so we headed for home where I was confident Chris would “feed me”.  Both Chris and I kept saying “we need to go there!”

While we were wandering around looking for hours, etc. we met Kevin the owner/Chef and learned that there was going to be a private special dinner – wine tasting with the winery named Ladera Vineyards, which was a five-course wine dinner hosted at Nectar.  Chris called a couple of times and tried to make a reservation.  We never did hear back from Nectar… so we assumed they were booked full.

Finally the day before the wine dinner Chris received a call on her cell phone.  It was Nectar inviting us to attend because they now had an opening and explained that we had been on a waiting list.  We both agreed we would love to attend.  I decided that night I needed to do a little research on Ladera Vineyard.  To my surprise, the winery resides on Howell Mountain.  Reviewing the website I was also pleasantly surprised that Pat Stotesbery (Proprietor) is a native Minnesotan!

Please appreciate the ambiance, so the photos are a little dark as the flash spoiled the “feel”…

I immediately knew Nectar must likely have some great wine.  I was really looking forward to the wine dinner now. 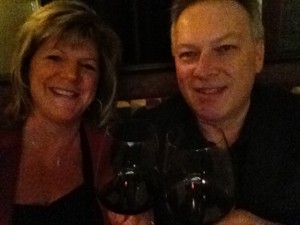 Chris and Bill with our first glass of wine.

The wine dinner was to begin at 7:00pm.  Chris and I arrived as directed between “6 and 6:30” (we arrived about forty minutes early) to be greeted by a very friendly hostess.  We were seated at a very private and quaint booth in the rear of the dining room.  The menu was left available for our review on the table and it looked awesome.  We were being served a five-course dinner; each paired with wines featured by Ladera and Pillow Road owned by the Stotesbery’s. 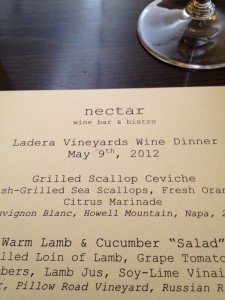 The first course began with the Sauvignon Blanc paired with Grilled Scallop Ceviche.   The Ceviche was excellent!  During the tasting, we were greeted by Dan Stotesbery, who came to our table and sat down and joined us.  We spent several minutes talking about his family and it’s winery, as well as some of our favorites including discussing some of our friends that live in the Valley.  Dan was very personable and friendly.  We also told him that we had plans visiting Ladera in an upcoming visit the following week.  Dan was happy to hear this; said “I wish I was going home” and stated that his mom and dad are there daily and that we should ask for them!  He also gave Chris what he called the “Golden ticket”, which was his business card, and assured us that they would take care of us.  I think I see another wine membership in the near future….

Course two was a Warm Lamb & Cucumber “Salad” paired with a Pinot Noir from Pillow Road Vineyard.  Both again were a hit.

The third was a Shrimp & Linguica Sausage paired with a Ladera Howell Mountain Malbec.  The Linguica sausage was amazing!  Chris has to make this for me at home!

Course four was probably my favorite.  We were served a “Fork n Knife” Burger.   It was a fresh ground sirloin patty served with a Blue Cheese Fondue; with Vidalia onions and sourdough toast points.  We both loved it!  The burger was paired with the High Plateau Cabernet Sauvignon.  The High Plateau was excellent too. 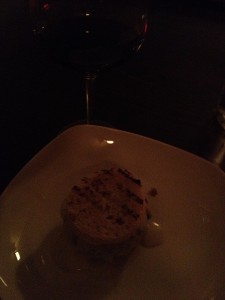 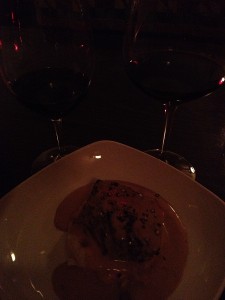 The dinner ended with a Chocolate Tort to dip in sea salt as well as another chocolate covered toffee.  Both delicious!

We were extremely pleasantly surprised with the quality of the food, as well as the wines.  The servers were great as well!  After the dinner was done, we had the opportunity to meet Kevin; the Chef/Owner – Proprietor of Nectar Wine Bar & Bistro.  He was very friendly, knowledgeable and down to earth.  We look forward to many more dinners in the future.

I hope to bring my business guests, as well as other winemakers who’s wines, would be appreciated there as well.

It was a great drive by … and we regret stopping sooner.

We hit another weather milestone today.  The back yard temperature…

Chris and I are really trying to eat more fish…

Our introduction to Ladera wines came from a wine dinner…