Happy Friday.  It’s hard to believe it is Memorial Weekend!  It feels like it was just Easter last week.  I hope you all pay tribute to all of our veterans.  If you see a veteran on the street, store or airport, make sure you thank them.  Many have lost their lives for our freedom.

Its hard to believe its been almost a week since since we returned from Napa Valley.  We all had a great time and I already miss it there and my friends…

This week for the most part went really fast.  I had a business guest in town, we had a couple dinners with our customer.  The first dinner was at Bar La Grassa located in down town Minneapolis in the warehouse district.  Bar La Grassa has excellent freshly made italian food.  We paired the food with two Nebbiolo’s from Italy.  The first was a 2009 from Produttori delle Barbaresco, Piedmont, Italy.  This one was a little more earthy than I expected.  The second was a 2008 Enzo Boglietti, La Morra, Piedmont Italy.  This one was more fruit forward and very delightful.  Both were good.

Most of the people I work with and my customer called it an early day.  Chris and I needed to pick up a few things from Trader Joe’s so we headed down to Maple Grove.  Driving through Maple Grove on the way home we both smelled some freshly cooked garlic and immediately my stomach was growling.  I needed to have a late afternoon snack.

As soon as we got home, we quickly unpacked and Chris started preparing us some snacks for our happy hour.  She cut up a baguette and toasted it.  While she was toasting the baguette she started cutting up some cheese and placing it on the plate.  Chris also grabbed some fig spread and prepared a balsamic vinegar dip and rosemary infused olive oil for the baguettes.

As Chris was preparing our delightful afternoon snack, I wondered down to our cellar to grab a bottle of wine.  I wanted to grab a bottle we both would enjoy and help remind us of our past trip.  After pulling and retuning bottles I came across a 2006 Cave 7 Pine Ridge Cabernet Sauvignon. 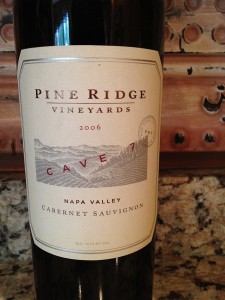 The 2006 Cave 7 Pine Ridge Cabernet Sauvignon should go perfect with our little afternoon snack.  I grabbed the bottle and headed up stairs.  Chris was just pulling the sliced baguette (crustinies) from the oven.  They were golden brown and lightly toasted.  The cheese platter was almost ready.  She was happy with my choice of wine…

I immediately pulled the foil and pulled the cork.  The “pop” was like the end of the day work siren.  I inserted my new VinoAir into the bottle and poured a splash into our glasses. 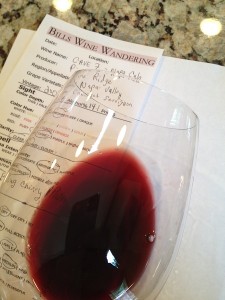 Inspecting the 2006 Cave 7 Pine Ridge Cabernet Sauvignon in my wine glass I could see a nice dark garnet color to it.  The Cabernet was very clear and the color depth was medium.  Under a glass you could somewhat see through the wine.  It was time to give the Cabernet a sniff.  Unfortunately after one sniff Chris gave into temptation and immediately took a sip…

The aroma of the Cabernet was very nice and aromatic.  It was not overwhelming.  I could smell Bing Cherry, Plum, and ripe fruit.  It really smelled excellent.  Ok, I gave in too and gave it a sip.  As I sipped the Cabernet the tannins were medium and soft.  My tongue did not immediately feel dry.  The Cabernet was medium bodied.  The tannins attacked my mid palate and the finish was long and soft.  I could taste Blueberry, Cocoa, Bing Cherry and a hint of Plum.

After our first sip we headed out to our deck with our yummy wine and cheese platter.  We spent the next hour or so talking and reminiscing about our Napa trip.  Eventually Heather and Chris started texting and next we knew they were coming over that evening.

We did finish the 2006 Cave 7 Pine Ridge Cabernet Sauvignon along with the cheese platter.  It was a great way to start the weekend 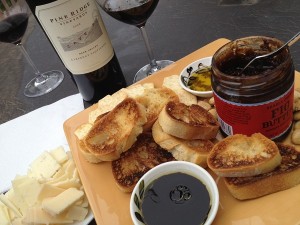