We recently visited Napa to pick up wines for the Alexandra House charity event.  Chris and I donate our time and are part of the fund-raising committee  and are involved in the Hope Gala, which is to be held March 1, 2014 at the TPC in Blaine.  The event features great food, live & silent auctions and a moving program that will inspire folks to join us in ending domestic and sexual violence.  If you would like to learn more, volunteer or donate to this cause,  here is their link Alexandra House.

Many months ago we reached out to numerous Napa and Sonoma wineries including Beringer Vineyards, Joseph Phelps, Robert Biale, Cosentino winery, pureCru, Pine Ridge, Kunde, Peoples Wine Revolution, Sequoia Grove, along with a few others to see if they would be willing to help.  Some of the wineries donated tastings and others offered wine.  We were fortunate that almost every one donated and sincerely thank everyone for their participation and for helping the survivors we serve!

Joseph Phelps was very gracious and donated a bottle of 2010 Insignia that was signed by Mr. William (Bill) Phelps.  This was one of the wines we had to pick up while we were out.  Chris and I have been members of the Joseph Phelps Red wine program for years and have added the option receiving Insignia and Backus (their premier wines) yearly.  We had not been to the estate since the remodeling has begun so we were looking forward to seeing what the temporary hospitality trailers were going to look like.  We also are always eager to see friends who work there.  The valley had been dry for many months, but fortunately the rains started the day we arrived.  We teased many times that we were responsible for bringing the rain and saved the valley!

While we were at the hospitality trailer we decided to sample the current wines that they had to offer.  As usual they were really tasty.  We had the opportunity to try the 2011 Napa Cabernet Sauvignon and the 2001 Le Mistral from the library.  As soon as we tasted it, I knew we had to buy a bottle each to bring home. 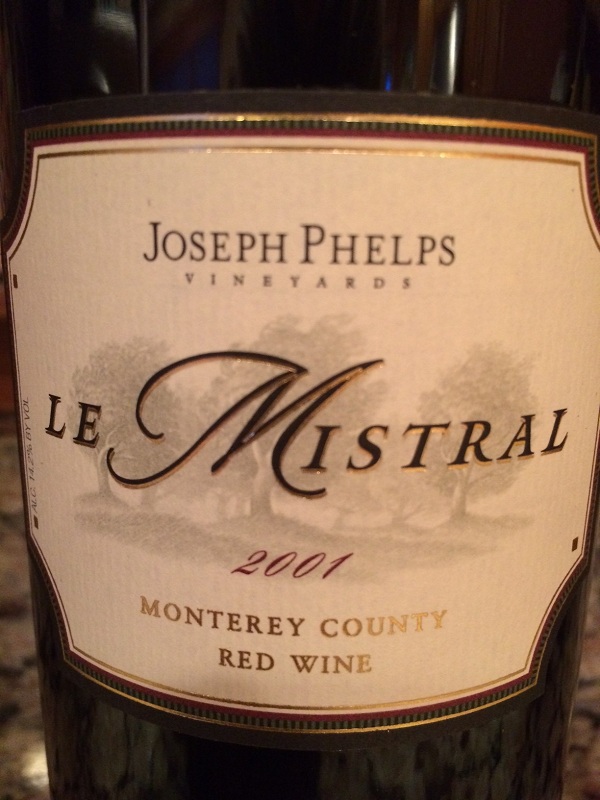 February 18th every year is Nation Drink Wine Day.  The purpose of National Drink Wine Day is to spread the love and health benefits of wine which has played an important role in history, religion and relationships.  We embrace the positive benefits of wine such as new friends, and actually reduce the risk of heart disease while enjoying the enhancement of food and life.  I decided to grab the 2001 Les Mistral and celebrate the day with Chris.

Sight
The wine was medium colored with a garnet/brick hue.  You could see the meniscus was clear. 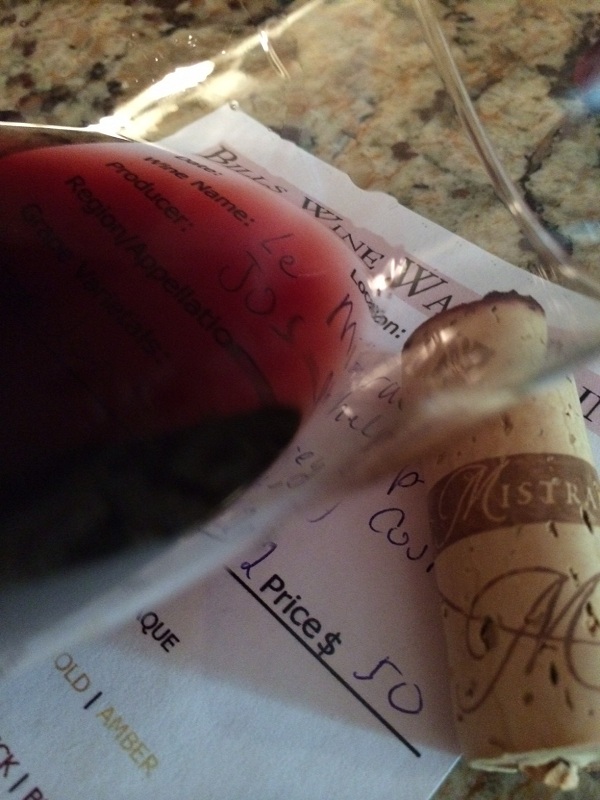 Smell
The Les Mistral was very aromatic and the development was middle-aged.  I could smell cherry, plum, spice, strawberry, earth notes, and creme brulle developed over time.

Taste
It was slightly dry, full-bodied and the acidity was lively with tannins that were medium, but soft.  Tasting the wine there were many mid palate flavors.  The mouth feel was soft and silky with a velvet finish that was long and flavorful.

How much: $50 before a club discount and was worth the price.

I rated the 2001 Les Mistral four glasses.  We really appreciate Joseph Phelps for the donation.  We have friends attending the Hope Gala in hopes to wining the bid for the table of wine including the awesome signed bottle of 2010 Insignia.