I was gifted a twelve bottle wine cooler from a friend a couple years ago.  I knew the exact spot that I wanted to put it!  It was going into our kitchen pantry…  We needed to add an electric outlet, but it would be so convenient to have it in the kitchen, right where we hang out so much!  I figured it was the best place.

The cooler had been running great for a long time.  One evening I opened the door and grabbed a Purity from pureCru winery.  I was interrupted and left the door open for a few minutes.  After a while when Chris went back into the pantry to grab something she realized the door was open, so she closed it and thought nothing of it.  As my luck would have it, the cooler died and stopped working.  I unplugged it for about an hour thinking perhaps it quit because there may have been a safety feature.  Nope, not today.  I left it overnight and tried again the next morning.  The cooler was dead. 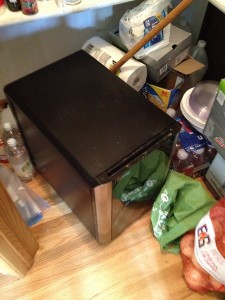 Here lies my dead cooler in the pantry

I had to decide if I should try to get the cooler repaired or buy a new one.  I’m not much into fixing things myself and decided pretty quickly that I would purchase a new cooler.  I started searching online for a cooler that would hold twelve bottles.  I was quite surprised on the varying prices.  I could see twelve bottle wine coolers running from $80.00 up to $250.00.  Some included shipping and others wanted to charge up to $35.00 for UPS.

I decided to look for local stores who might have a cooler in stock.  I figured I could drive a lot of miles in order to save $35 for the shipping, plus I could get it sooner!  After searching for about thirty minutes on line, I found one at the local Target store.  The cooler was an Emerson brand that held twelve bottles.

During lunch I headed over and picked it up.  I only paid $99 for it and it was right within the price range I wanted to pay.  I did not need all of the bells and whistles that were on some of the others, I simply needed a cooler that I could set the temperature and the light was optional.  It is after all, within the kitchen pantry and no one is really looking at it anyways! 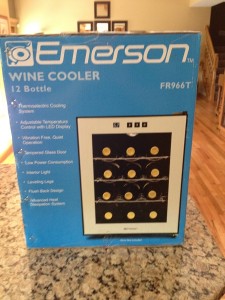 Getting home I quickly unpacked the cooler.  I removed the old one and replaced it with the new cooler right away. 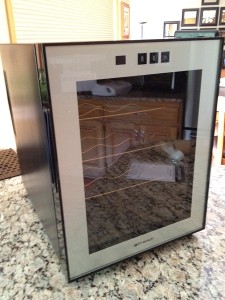 Cooler on the counter ready to be installed 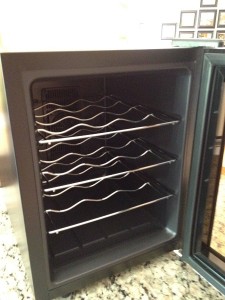 I plugged it in and let it sit for awhile.  The temperature was at 90 degrees because it had been sitting in my truck for a while after lunch.  The cooler cooled down really fast.  It really must have only been around fifteen minutes before it reached my desired temperature.  After the cooler was below 70 degrees I loaded it up with our white wine bottles as well as a 1987 “The Poet” from Cosentino Winery. 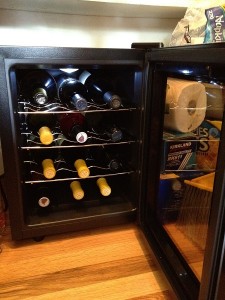 Cooler sitting on the floor loaded up 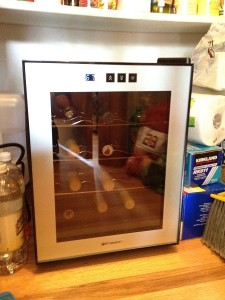 Everything is back and order. The bottles are happy with a cooling temperature of 60 degrees.  I like to keep them at this temperature.  I know some people recommend 55 degrees but I have found if the white wine is to cool you loose some of the flavors until after it warms up a little bit.

Since we’ve installed the cooler upstairs, we’ve seemed to start drinking more whites than we had years ago.

Have you ever opened a bottle of wine and it…

Beaujolais is a small appellation that is in the center-eastern…