Beaujolais is a small appellation that is in the center-eastern part of France just south of Burgundy and north of the city Lyon.

So what is a Beaujolais Nouveau wine?  Beaujolais is a very light red wine with very fruity aromas.  It became famous about 30 to 40 years ago.  It is released the third Thursday of November every year and is made from the same years crop.  So a 2013 bottle will have 2013 fruit.

So how is this wine made?  The style of the process is Carbonic Maceration.

The Gamay grape used to produce these distinctive wines is an early ripening, acidic variety.  Gamay is a purple-colored grape variety, most notably grown in Beaujolais and in the Loire Valley around Tours. Its full name is Gamay Noir à Jus Blanc.  It is a very old cultivar, mentioned as long ago as the 15th century. 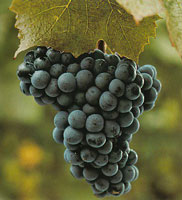 The fruit is lightly crushed and is put into a large container with no yeast to ferment.  The must (grapes stems before crush) will sit in a large fermenter for 8 to 10 days and will start to “Respire”.  Respiration is the process of converting the fruit sugars into Carbon dioxide and water.  It will heat up very much during respiration. Once respiration is complete the must causes intra-cellular fermentation, where the grapes ferment as a whole berry until all of the oxygen is gone.   After this time, the must will be crushed, pressed and yeast will be added to the must.  At this point, the final fermentation process is pretty quick.

The wine is never introduced to any oak so there are no tannins.   Since there are no tannins and a low alcohol content, the wine will not cellar very long.  It is made to drink now and many people say you should drink your last bottle by the end of December of the same year it is released.

One Reply to “Beaujolais Nouveau Basics”