Last fall Chris and I decided to give Nick and Bri airline tickets to California as their Christmas gift so that they could spend a long weekend in Napa with us.  It was going to be their five year anniversary dating and they wanted to so something special.

As we were getting closer to our travels, Nick informed us he would like to propose to Bri while in California.  He had purchased a very beautiful ring and stopped by to show Chris and I.  We were very excited for them and wanted to help make his proposal very special and memorable.  We had asked Nick his thoughts and he had imagined that it would be great to propose while we were at one of the wineries.  Since we would be spending much time in Napa, I immediately thought of Joseph Phelps.

Joseph Phelps has a great tasting area out back facing the vineyards.  There are many picnic tables and some are secluded, allowing Nick privacy as he proposed.  Once we decided where we thought it could be, I reached out to our friend Carly to help arrange the visit and reserve one of the private picnic tables.  Everything was arranged and the wait began!

Thursday, the day we flew out finally came.  Our daughter Michelle got up early and drove us so we did not have to worry about parking a car.   The kids arrived and the pickup was loaded before leaving for the airport.  Our flight to San Francisco was nice, but uneventful.  We spent Thursday afternoon in San Fransisco and seeing sights including Fisherman’s wharf and the Pier.  We finished the day at Cosentino winery with our friend Steve.  After the two of them sampled some wines, we were pleased to see Nick enjoys a great Pinot Noir, and Bri loved the CigarZin!  We were off to a great start of bonding and a fun weekend with the kids! 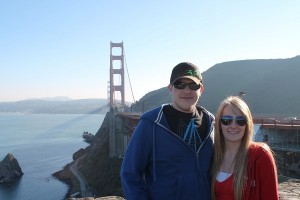 Nick and Bri at the Golden Gate Bridge.

We woke up Friday morning to excellent valley weather.  The temps were going to be in the 70’s with clear, sunny skies.  It was going to be a perfect day for Nick to propose.  Our first tasting and tour was at Pine Ridge Vineyards.  We scheduled a private cave tour and we I think the kids found the experience interesting as they where able to see how the juice is fermented, cellared and bottled. 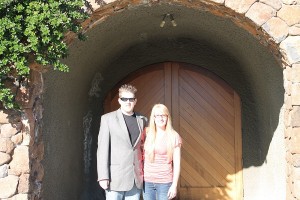 Outside cave entrance at Pine Ridge

After the tour ended, we visited our friend Mark  at Plump Jack and then had a quick stop at Beau Vigne to meet Kate.  We decided were getting hungry so we headed on our way to Joseph Phelps.  We grabbed a quick bite to eat in the parking lot.

We proceeded to the main lobby where we were greeted by Carly.  After some hugs and introductions, she escorted us to the back terrace for our picnic.  A bottle of Larry Hyde Syrah was a generous gift and a favorite of Chris’s. 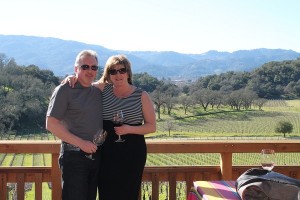 Bill and Chris on the Terrance at Joesph Phelps.

We hung out and had enjoyed additional snacks and sandwiches.  At this time, Nick was ready to sample the Freestone Pinot Noir.  He seemed to really enjoyed the Pinot.  As the day progressed we could see our boy’s mind wandering.  I am sure he was trying to figure out the best place to propose.  Chris had been taking fun pictures of Nick and Bri and suggested they walk out to the vineyard for a few additional shots.  Of course you are NOT supposed to venture out like what the kids did, but we were hoping for a quick picture and watching Nick propose in the vineyard.

As luck would have it, as they were standing in the vineyard Nick pulled out the ring and he dropped to one knee.  Although we couldn’t see Bri’s face, we could tell immediately that “she said yes”!  The next thing we knew was that she was in his arms with her legs wrapped around him!  I think both Chris and I had a tear of joy in our eyes watching things play out in the vineyard. 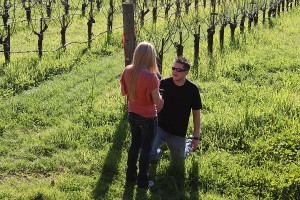 The proposal in progress!

I think everything was perfect!  The weather was excellent, the terrace at Joesph Phelps was private and welcoming…  Moments later the two of them returned to our deck where they were contacting Bri’s family.  They were busy on their phones for the next hour…

We appreciated them sharing their very special moment and thoroughly enjoyed our time with the two of them.  They had the opportunity to meet many of our friends and we enjoyed time at Carly and Roberts watching the Super Bowl.  (Sorry 49ers fans!)  The kids are already talking about the next time they visit Napa!  We suspect that Napa will always hold a special place for the two of them forever. 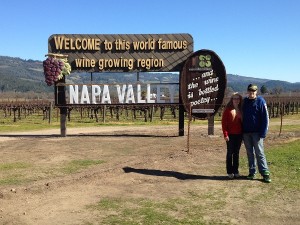 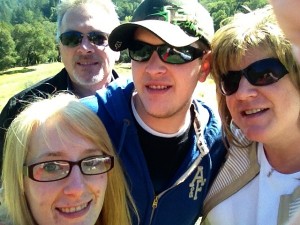 Another wine harvest has come and gone.  The 2015 harvest…

We learned yesterday that the Joseph Phelps passed away.  Our…

Chris and I enjoy having our adult kids over for…