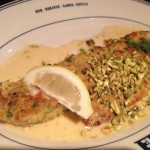 Neighborhood: Northwestern Suburbs of Minneapolis, the Shoppes at Arbor Lake
Cuisine: Steakhouse & Seafood
Cost: $$$ = Spendy, $31- $60
Two Forks = A worthy addition to its neighborhood with consistency in its food. I wanted to say three, but it isn’t a great value.

SPECIAL FEATURES:  “Master butchers hand-select and trim aged corn-fed center cut beef to ensure steaks are nothing less than extraordinary”.  The term “Pittsburgh Blue” refers to a way of ordering steaks purportedly popular among Iron City steelworkers: charred on the outside and cold inside.  They do know how to prepare the cuts the way you order them.

These folks claim to be a steakhouse for people who work hard and want to enjoy the rewards.  We’re not afraid to spend money on good, quality food, but keep in mind that they’re the same people who created the Buca and Oceanaire franchises and now own Figlio, the Good Earth, Chino Latino, Salut, Muffaletta, and Manny’s.  I found that the pricing is sort of on the lines of Manny’s.

We had passed by this place oodles of times and just couldn’t get ourselves to stop based on the wildly mixed reviews.  The food was good, but not overly earth shattering.  Relative to the price it is not what we would call a great value.  It was a Friday night and we were hungry.  We wanted something good, beyond the numerous chain options near by so we jumped on-line to make a reservation with just enough time to make the 30 minute drive.  We were greeted promptly and passed a multitude of folks waiting patiently for a seat. 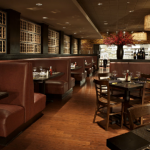 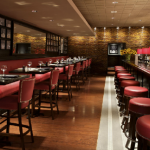 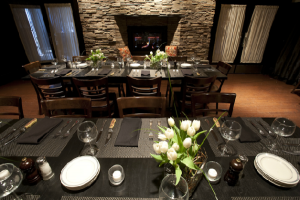 The ambiance was warm, but it felt very “busy” with a constant turmoil of people constantly moving about.  There are a couple of dining rooms aside from the bar area, and an attractive patio with seating. 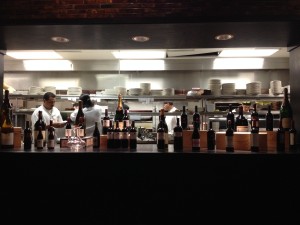 We were seated near the open kitchen, which is always fun for us.  Unfortunately, it became very hot, very quickly!  Overall, you can tell that they sort of want to be a higher end restaurant, given their prices and the attractive decor, but I think they are confused too.  “Come in a stretch limo or stretch pants – there’s no dress code here.”  Really?   Something is “off” with the ambiance.  There is a decent variety of tables and deep booths, but there is something terribly odd with servers pushing around old “steak house” type of meat gurney’s.  Our server Sara B, was friendly and knowledgeable and none of that is her fault so we didn’t hold it against her! 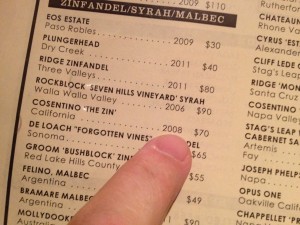 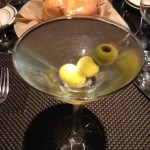 We considered wine from a decent variety including some common modest and prestige options; but when we spotted our friend Mitch Cosentino’s “2008 The Zin” for $ 70, (this is available at Costco next door for $12) we determined that  it has to be one of the steepest mark up’s in the Midwest and I went for a simple Martini instead.  Bill had a glass of CHENIN BLANC Pine Ridge (Napa Valley) 2012, $10; followed by a glass of MERLOT Sebastiani (Sonoma) 2009, $11.  I have since learned about the reasonable corking fee and understand that you can get a variety of $10 bottles on Mondays. 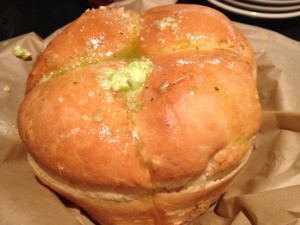 The loaf was average although very fresh and hot.  It had a lot of garlic butter on top, but was dry in the middle.  They could fix this by simply splitting the quarters before drizzling on the butter.

Unique:  Offering beer and wine dinners, (though the last one we tried to attend was cancelled due to low-interest) 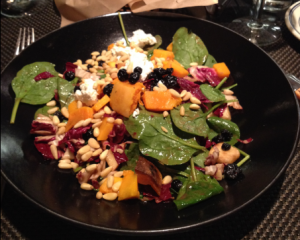 This salad was really good!  The portion was generous, enough to easily share between two.  The vegetables were fresh and it consisted of quality ingredients prepared just right. 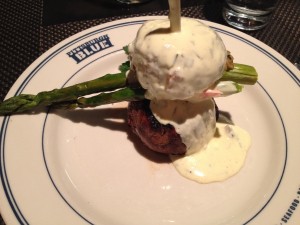 The petite filet was terrific, topped with a lump crab cake and asparagus a Be´arnaise sauce on top.  This presentation was to be desired.  Though it really was enough, it looked like weenie portions on a huge vessel! 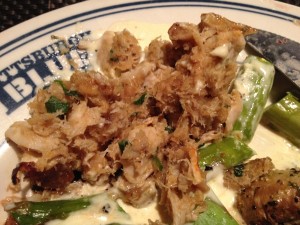 In the future, I would skip the crab cake.  It had an “odd” texture, without enough chunks of meat.  It was wet and fell apart and the flavors were too sweet for my liking.  It had hints of thanksgiving, which others may prefer.  The couple of asparagus were over cooked and not consistent with the one’s Bill received on the side.

Everything is served “ala-cart”, so as an “accessorie”, I chose the PAN ROASTED MUSHROOMS*, $6.96 (never did figure out where all the asterisks were to lead us?!) 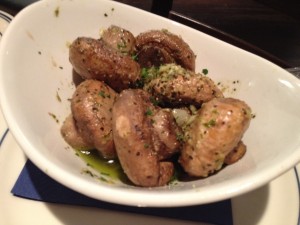 They were good, but I was underwhelmed.  They were fresh mushrooms, but were drowning in an abundance of garlic butter.  After dredging them from the butter bath, I did eat a couple of them once I “dried them off” with the cocktail napkin.

Bill’s entrée was the 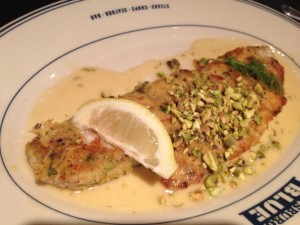 With lemon-dill butter sauce.  This was really good!  The fish was a decent portion and very fresh.  It was lightly breaded and pan-fried light and flaky.  The Pistachio’s added a nice textural element add the butter sauce was rich and silky.

His side was an order of the ASPARAGUS/HOLLANDAISE****.  He specifically ordered “for one”, since my meal included asparagus and while it’s price is listed for $6.95, he was charged $8.95 on our receipt. 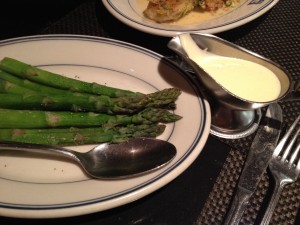 Asparagus (5 or 6 stalks for individual portion) was average, but it was served with a pretty bland Hollandaise sauce.  I understand that thick or thin spears are a personal preference, but if you’re going to serve fat spears, you really need to peel the tick outer layers after breaking off the woody bottoms.  The difference between peeled and unpeeled thick spears is substantial.  The tips were soft and flavorful, but most of the stocks were too tough and woody to enjoy.

Each of these usually decadent sauces were bland and not flavorful, which was disappointing.  The ingredients for hollandaise sauce are water, lemon juice, salt, white pepper, egg yolks, and butter.  It is traditionally served with poached fish, boiled or steamed vegetables, and also with Eggs Benedict.  Béarnaise sauce substitutes vinegar for the water, and adds shallots, tarragon, chervil, and (sometimes) parsley, thyme, bay leaf, and cayenne pepper.  It is most often served with grilled meat or fish.  Unfortunately, neither were special.

Although we didn’t order any, the hash browns looked massive in size and the loaded mashed potatoes, topped with bacon, green onion, sour cream, and cheese, looked to be hearty and comforting.

Dessert: We didn’t order any.

Overall, we tried it, we sort of liked it, but are pretty sure we won’t be going back for a while.  Not our first choice!