With the holidays nearing us I thought I would write about Champagne basics.

First, Champagne comes from the Champagne region of France.  No other place in the world can call the sparkling bubbles Champagne unless it comes from this region.  For other parts of the world, there are other names, Cremant in all other parts of France, Spumante in Italy, Sekt in Germany, Cava in Spain.  As far as the US, it is called Sparkling wine or a winery can call it Champagne as long as the region is part of the name such as California Champagne. 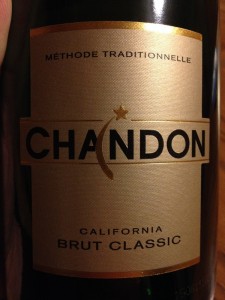 Where do the bubbles come from?  Well, it has to do with second fermentation.  The second fermentation is conducted in the actual bottle (if it is done the traditional method, more on this soon).  Since the container is closed the carbon dioxide has nowhere to go so it solubilizes in the wine itself.

So what kind of fruit can you use?  If the wine is Champagne from France there are only three varietals, Chardonnay, Pinot Noir, and Pinot Meunier.  All other parts of the world can use any red or white wine they choose.

So how is it made?  The base wine is called Cuvee.  The wine is lightly crushed and is fermented to dryness (all of the sugar is fermented) just like a white wine.  One thing that is different from a white wine is the Chardonnay fruit is picked at a lower Brix.  The cuvee should ferment less than 11% (9% to 11%) alcohol by volume.  Remember the second fermentation increases the alcohol content in the bottle.

Once you have a base Cuvee there are three processing methods. 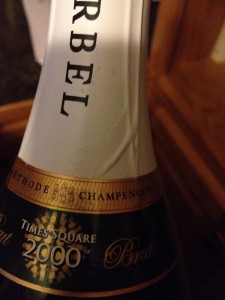 This bottle shows it was created using the Methode Champenoise process

Within the Methode Champenoise method, there are many steps I would like to briefly mention.

After the base Cuvee is ready, a Tirage is added and they are bottled to let the second fermentation proceed again.  The Tirage is a sugar syrup of wine and yeast.  The fermentation takes one to three months.  We age the wine on the dead yeast cells.  This step is called Aging on the Lees.  After the Champagne has been aged we have to somehow remove the dead yeast cells.  Which brings us to the next step called “Riddling“.  The riddling process involves rotating the bottle neck down and slowing rotating the bottle until all of the dead yeast is in the neck.  Many years ago there used to be people called Riddlers who would rotate the bottles.  Thankfully we have automated machines.

After the yeast is in, next comes the tricky part.  How do you remove the yeast when the bottle is under so much pressure?  This step is called “Disgorgement“.  What you do is insert the neck of the bottle into a brine solution that is -24° C.  You allow the dead yeast to freeze in the neck.  Once the yeast is frozen you remove the cap and the pressure will slowly push the dead yeast out of the neck.  Since we have removed the dead yeast we have to add additional liquid to the bottle.  This step is called “Dosage”.  The Dosage is a mixture of sugar and some more wine.  Sometimes brandy is added for flavor.  At this point, you insert the cork into the bottle and tie it off with a wire cage to make sure the cork does not shoot out as it sits on the shelf or your cooler.

The second process is called Charmat Process.  The Charmat process is also called the bulk or Italian method and is the least expensive of the three methods.    Instead of conducting the second fermentation within the bottle, the fermentation is conducted in a large tank held under fermentation.  So you might ask “What’s the difference“?  Since the wine was fermented in a tank the bubbles are larger and you do not get the yeast taste as you would from the traditional method.

The third is the Transfer process.  How this works is the wine made is made like the traditional way.  The difference is towards the end of the process.  Just before the wine is “Riddled” to remove the dead yeast, the Champagne is transferred to a holding tank like the Charmat process.

One Reply to “Champagne or Sparkling wine basics”