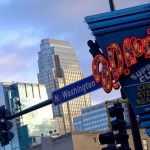 SPECIAL FEATURES:
Handicap accessible: Yes
Free parking: Valet –The valet parking was free, but “Due to construction in the area – they now charge $5 for valet to offset some of the increased costs and $10 on game/event nights
Vegetarian options: Yes
Kid friendly: No
Liquor served: Full Bar
Wine List:  Bill said the Wine selection is decent.  It has a large variety of wines to choose from.  Some impressive.
Outdoor seating: Yes
Reservations: Yes
Splitting fee:  It’s right on the menu “Want to split an order? We do charge you $4.00 for the plate with garnish. Additional food will be charged pro rata, á la carte.” 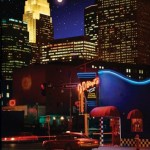 I haven’t quite figured out how to describe this place.  Just about every reviewer raves about them on line and it’s a joint that really seems to be loved.  It isn’t bad don’t get me wrong, it simply wasn’t what I imagined before dining there.  I’ve been on numerous business dinner meetings with Bill and just was sure what to think when I learned that his friend and co-worker Kevin (who loves to dine out and understands fine dining) wasn’t terribly excited about this restaurant.  Bill had previously brought home some left overs and this was a place I had wanted to try.

When you walk in, this place looks like it’s for businessmen from the 60’s or 70’s.  It’s decor is a mix and match of “old classic” with sports memorabilia.  The flooring is done in checker board tile and it has a mix match of chairs, with white linens depending on which dining room you sit in.  It reminds me of somewhere my dad would have liked to have eaten.  He was a business man who suited up and enjoyed the old “supper clubs”.  The menu cover is classic looking, but it has an odd (almost an attempt to be witty) printed insert.  They refer to J.D. Hoyt’s on their website as a roadhouse, (Wikopedia: a commercial establishment typically built on or near a major road or highway that services passing travelers) but what does that mean to me as a patron exactly to sell me on the food?  It is a vintage type supper club that sort of takes you some place else in time.  The founders of J.D. Hoyt’s named the restaurant in memory of their fathers; so maybe there is something to that!  I am still trying to figure out what everyone thinks is so special here as I thought the food was mediocre at best and our server seemed to be new to waiting tables. 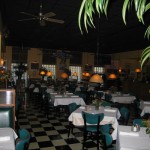 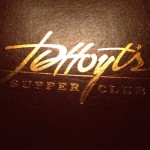 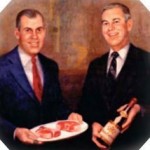 It is nestled between two strip clubs, (which I think is really odd, but might explain why they are apparently known to draw in the sports dudes of the NBA, NFL, NHL and MLB.)   It’s s located in the warehouse district of old Minneapolis and folks come for dinner mostly in addition to the apparent desire to hang out in its throwback atmosphere in the bar area.  I also hear they have a pretty good brunch.

The menu is huge and written old style.  With five in our party, others were making selections to share. 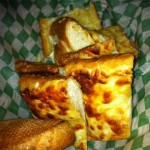 This appetizer was pretty good in regards to “Ooey-goey-blow any kind of conscious healthy choice eating” thoughts.  I could see eating a bunch of it just dipped in a pizza sauce on a cold winter night if you were in a “Sweat pants, pounding beers” kind of a mood. 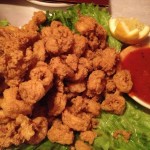 Not worth eating.  Likely frozen.  It had THICK, chewy tough breading and the marinara was thin and really different. 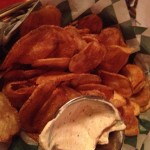 There was nothing special about the apparently “borrowed from Rome’s Hotel Hassler” (where I’ve not been, but didn’t eat any chips tough and bland like these while recently in Rome) chips.  I’m not sure what was in the seasoned sour cream, but I’m guessing Cajun spices, since it’s available on just about everything else on the menu.

Though the prices were really cheap, these last two items were not worth the calorie intake. 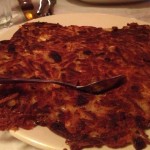 Dang it!  I’m a HUGE hash brown fan and when Kevin ordered them, I was secretly excited for the potato indulgence to come.  These were super “done” and not a delicate crisp.  They were way too salty!  Needless to say, I was bummed.  There wasn’t any soft or creamy potato insides to be found.  It was just salty – crunch that tasted like they had old oil. 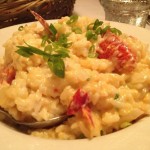 This was YUMMY!  The rice was a nice texture; not too al dente and not too runny or soupy.  I actually wished we had more to share.  It included a generous portion of fresh lobster and was rich and flavorful.

I’m still kicking myself for not ordering the J.D.’s Famous Grilled Cajun Pork Chops – Their signature item: Two chops that total approximately 13 oz. each. Rubbed in peppery Cajun spices, seared and then s-l-o-w cooked over our hickory smoke fire!  (This was one of the bites of left overs that Bill had previously brought home.  It had been tender, thick and smokey with just the right amount of seasoning)  ($25/1 Chop $21, but who wouldn’t just have the left overs?!)

Instead, I listened to my conscience and ordered the Charcoal Grilled Halibut with Jamaican Seasoning (8 oz. $30) Liz ordered the same thing, but with the Cajun Seasoning. 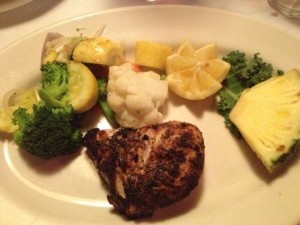 All of the seafood entrees are grilled over hardwood charcoal and it was good.  But look at it!  It’s so BORING!  Bill has this saying when he’s being sarcastic and really isn’t a big fan: “Fine, Fine” and that’s what this dish was.  You can see there were a couple of bits of plain steamed veggies which were under seasoned and the odd old-school cut garnishes were almost equal portions to the vegetable!  Presentation lacked seriously here.  Maybe a smaller plate?  At least the fish was good and that really was all that mattered at that point. 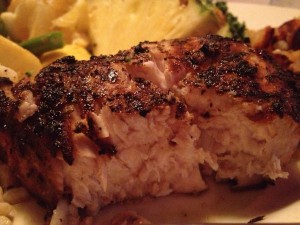 It was meaty and cooked appropriately, so I was happy and I believe Liz was too.

Bill ordered the Charcoal Grilled Scallops – Approximately 1/2 Pound (6-8 pieces) of sea scallops grilled with your choice of seasonings. “We recommend Jamaican seasoning.” Well of course you do!  ($20) 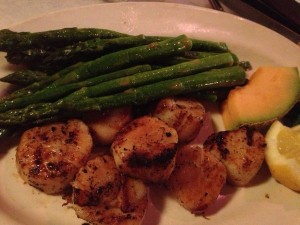 He was very happy with his meal.  It really was a decent portion of scallops and though they were a bit on the small side, they were cooked right.  The asparagus was also cooked al dente to his liking.  I just have a thing about presentation, because we eat with our eyes and we could have done away with the melon and lemon chunks.

I can’t remember exactly what Kevin or Jon ordered.  I think a meat combination for Kevin and likely fish for Jon because he’s pretty health conscious.

I’ve heard that the mega cut Prime Rib is “exquisite” and slices like butter so I may be back to try that.  I also know that the owner could not be nicer and more generous because Bill had referred one of my staff members to J.D. Hoyt’s for a special meal.  It is my understanding that everyone was very accommodating and that the entire serving crew were fabulous making the engagement of Randy and Alyssa special and memorable.  (Notice the small print on the menu above the ring) They tell me that the owner even comped their entire meal including champagne “on the house”.  That is pretty spectacular and they loved everything about it! 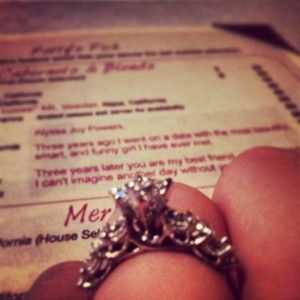 Well Liz and I thought that an Espresso Martini sounded good (they were delicious), while the guys enjoyed a glass of port. 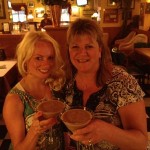 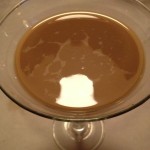 We enjoyed some terrific wines that would make any meal wonderful 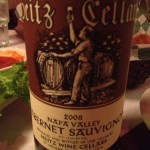 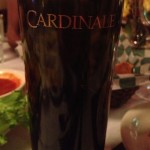 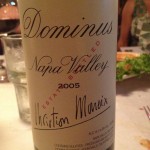 But overall, I thought that the food was just “meh” or “OK”.