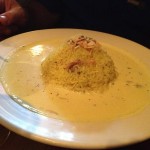 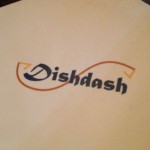 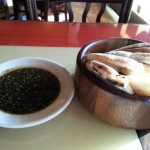 Complimentary: Fresh warm pita bread and herb infused oil for dipping;  It is great here, of course and it is replenished.

DishDash is a traditional article of middle eastern clothing that symbolizes warmth, comfort and relaxation.  According to Wikipedia, it’s an ankle-length garment, usually with long sleeves, similar to a robe.  The restaurants website describes its menu as a “Tantalizing and colorful array of fresh lamb, beef, chicken, seafood and vegetarian dishes are a feast to the eyes as well as the palate;  Echoing the echo the culinary traditions of middle eastern countries various of old and new through an infusion of authentic spices and contemporary presentation.”  It is an “Imaginative cuisine” and I can tell you it’s delicious! 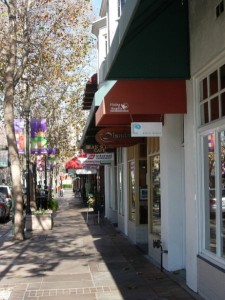 We have eaten here on a couple of occasions while out in Silicon Valley.  Sunnyvale is very close to where we often stay for Bill’s work.  The city is beautiful and it is a clean suburban setting with many shops and restaurant options.  The area has a low crime rate and we really like the environment while dining outdoors.  This place is incredibly popular for good reason.   Just look into the staggering amount of favorable reviews and you’ll see why reservations are recommended.  It is a very large establishment, but none the less it is typically packed!

Bill and I went with two other gentlemen without reservations and fortunately were able to get seated immediately.  We were given the option of inside or out without a wait.  Because it was a bit chilly, we opted for indoors.  The booth was a bit tight, but we didn’t complain.

Because we were eating cuisine we don’t get every day, I suggested being adventurous and chose the appetizer sampler.  Bill and I have chosen it in the past when it was recommended by our server.  It offers a wide range of delicious and flavorful fresh-made dips.  I can not pronounce anything on the menu, but I will tell you the flavor combinations were splendid! 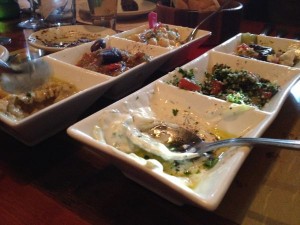 We started off with: The Maza Sampler: A colorful sampling of Hummus, Babaghanouge, Tabouli, Rihan, M’nazaleh, Khyar B’laban and Falafel topped with fresh parsley and tomatoes with strips of fresh pickled turnips, pickled cucumbers and kalamata olives. (for four $20.95) I thought it really isn’t a bad price considering each of them were listed individually around seven or eight dollars. 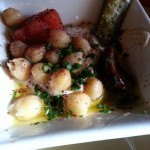 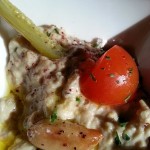 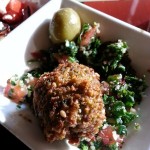 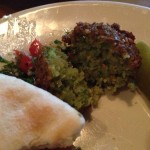 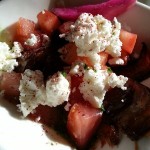 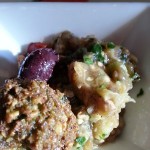 Khyar B’laban – Grated Cucumber in a yogurt-garlic sauce, a touch of fresh dill and a splash of virgin olive oil. 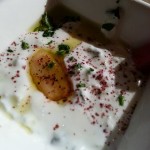 Though I loved them all, I have to say that the awesome flavor of the eggplant in Babaghanouge was perfectly smokey and the crunch of the walnuts in the M’nazaleh – left me wishing we had more! 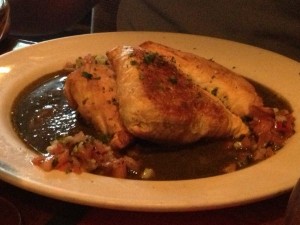 Friend Chris reported that it was delicious!  Crispy filo dough and the stuffing was tasty!  I thought it looked very good and I may need to try that next time we visit! 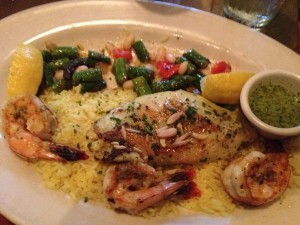 This was the dish I selected.  I thought that overall, it was just “OK”, but I didn’t think there was anything extraordinary about it.  The seabass was cooked very well, but the prawns were over cooked a bit and nothing really special.  The veggies on our plates tasted fine, but could have been julienned for a more inviting appearance.

Mansaf ( a Nomadic dish ) – Tender chunks of lamb, cooked in aged yogurt, served with rice and topped with roasted almonds. ($17.95) 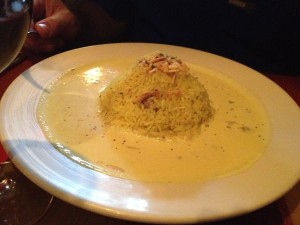 Friend Denis enjoyd the dish.  He did say that there were indeed chunks within the mound of rice that were very juicy and tender.  Other reviews said that they just melted in your mouth and that it was incredibly rich, buttery and creamy.  I think I would consider splitting this with Bill at another visit because of how rich it is. 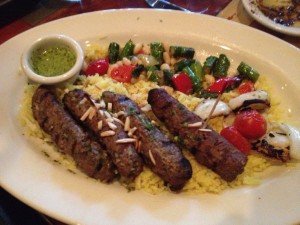 Bill chose this dish.  I didn’t think it was very appealing, but he expressed how much he enjoyed the flavors of it.  I thought a kebab was is a wide variety of “skewered” meals and this wasn’t on a stick.  The sausage looking links seemed a bit dry to me, but then again I’m not much of a sausage fan.  The seasonal vegetable was asparagus, but why chop it all up?  Again, I didn’t love the presentation, but Bill said it was fresh and delicious.

Other reviewers say that the vegetarian options on both the lunch and the dinner menu are mouthwatering and the portions are filling.  Overall the service was average, but not great.  There was often too much lag time between things and we were left waiting with empty wine glasses.  I hate having to ask for my water to be refilled, but our server did deliver us a complimentary dessert.  Likely because all four of us had a glass of expensive Port; one of which he said he had never served and there was some reluctance whether or not to order a glass when he couldn’t confirm when the bottle had been opened.  After a taste test from the guys, they went for it anyways. 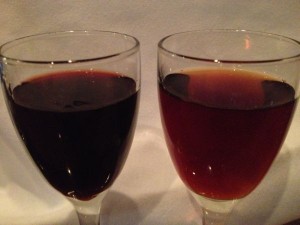 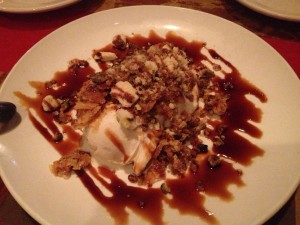 This was delicious!  The portion was perfect for the four of us to share a couple bites a piece.  Creamy vanilla ice cream with crisp bites of the crumble.  The caramel was silky and overall a hit with everyone!

One Reply to “DishDash, Sunnyvale, CA”