While at Verite a few weeks ago with some friends, Monique had asked Chris if we were attending the Fête de la Fleur, The Flower Festival they would be hosting at Verite.  We absolutely were!  Monique mentioned that there was going to be a picnic on the lake at the Verite property and invited us to join them along with some of their other friends.  We were thrilled and looking forward to the lunch!

The morning started early with the sun rising around 5am.  I had our window and blind open so besides the sun shining on my face the birds started singing their songs.  Trying to sleep a little longer we went ahead and closed the windows and blinds.  As we tried to sleep another a little longer, we realized it just was not going to work.  Our bodies are used to getting up early and with the time change we were up!

Chris and I decided to take a long walk in Windsor where we were staying.  The weather was beautiful and there was a slight breeze to help keep our body temperatures down.  After our brisk walk was done we enjoyed a nice breakfast outside on the deck.

After enjoying our morning together, we were on our way to Verite.  Our drive was relatively short as we jumped on Shiloh Road east and worked our way to Dry Creek Road.  Dry Creek Road is absolutely beautiful.  I would recommend the drive if you are in Sonoma Valley.  We arrived a few minutes early… 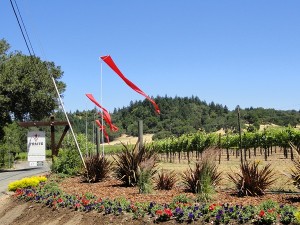 As we entered the Verite property there were numerous flags labeled “Fête de la Fleur” and “Verite”.  We basically followed the signs and drive past the estate house and tasting room. 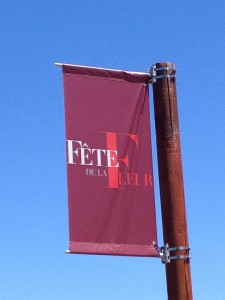 We followed the signs driving to a part of the estate that we have never been to.  In the back of the property was a small mountain that we drove up.  As we made our way to the top we could see the entire vineyard.  We must have been up a couple hundred feet and it was beautiful.

Once we reached the top of the hill, there was a large horse barn.  We could see Monique walking with some friends along with some people from the “French Press and Public relations”.  She was waiving to us and happy to see us!  We were very happy to see her too! 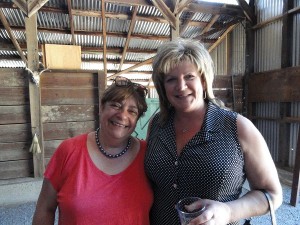 Monique and Chris in the barn.

We parked the car and walked over to a large flat spot on the hill.  Monique and Pierre explained that they hope to build a house on this location on top of the hill.  The view was amazing in every direction! 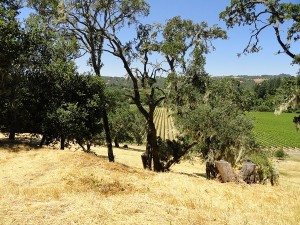 After greeting Pierre, Timothy and some other guests, we proceeded down to the lake.  The lake was larger than I expected.  Although we had previously had plans to visit the lake in the past, the weather spoiled those attempts.  The setting was beautiful and there were numerous tables setup with additional tables of food prepared by the local companies in Healdsburg.  The theme was local markets like France.  The food offered included a fresh tomato salad with balsamic, fresh duck breast with lentils, home-made breads and various cheeses, oysters on the half shell, and mini deserts.  Of course the food was served with a Cabernet Sauvignon Rose’ Pierre crafted with some delightful 2010 and 2011 Le Joie and Le Desir wine! 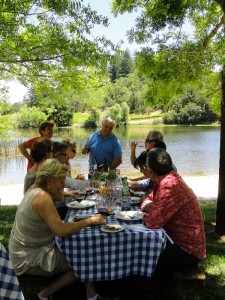 Pierre and Monique with the French Press!

We ended the afternoon at the lake and headed back to the house.  We knew the evening was going to be as great so we rested and prepared ourselves for the night.

The Fête de la Fleur event started promptly at 6:00pm.  Chris and I arrived a little early and were greeted by Kim by the tasting room.  After signing in we had a photo taken in the tasting room.  We then ventured out and headed towards a serving table where Champagne and Pierre’s Rose was being served.  Chris started with some bubbly and the huge fan that I am of Pierre’s Rose’, I opted for some right away. 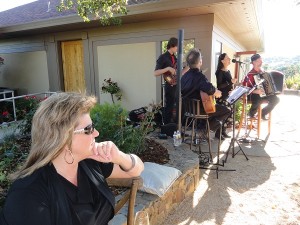 We sat under the big oak tree and just soak in the ambiance.  Both Chris and I love the Verite estate and could be here everyday!  There was a lovely band playing french music.  I recall Monique stopping by and reminiscing about her young adult days.  She had a huge smile and began singing along with the band.  As time progressed, numerous people started showing up.  The next thing we knew, the back yard under the large oak tree was humming with conversations and full of people.

We enjoyed sipping and sampling numerous delicious appetizers and after some time the bands songs came to an end.  Bob stepped up to the microphone and gave a brief speech.  He talked about the early days of Verite winery and his association with Pierre.  You could see the pleasure in Pierre’s eyes.  Bob asked Pierre to come to the microphone and give a quick speech.  Pierre explained he would give us some words later in the evening and basically said “lets enjoy our friends and dinner!  Cheers!!!”

It was time to proceed to our designated tables for the dinner to begin.  There was a long red carpet leading from the tasting room to the back yard portion of the estate house.  Chris and I were seated at table eight with six additional people. 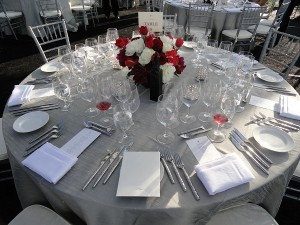 Three of the six guests seated with us were from the French press and we had spent some time with them earlier in the day.  Eric, an additional guest was from the French PR firm. 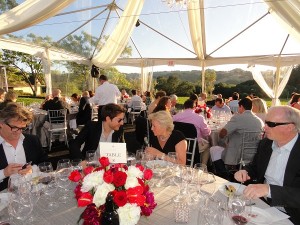 Eric is the second guy from the left hand side

The another very nice couple seated with us were Leonard and Melinda Cairney.  After visiting for a while, we learned that Leonard was the former CEO of Kendall-Jackson Winery who had retired in 2002.  He did explain that his wife Melinda is keeping him very  busy! 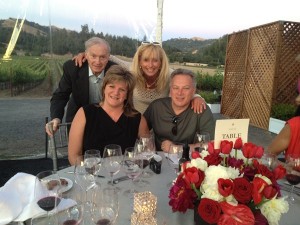 The ladies enjoyed conversation and the four of us talked about our kids and life.  We had many stories and could relate to the issue parents have while raising children.  Leonard and I kept visiting about the different …. VERITE wines that were shared during the dinner course. 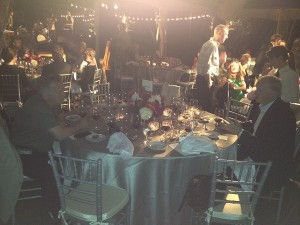 Our evening came to an end with a final dessert course of Plum Far Breton, topped with Vanilla Armagnac Ice Cream that was infused with Pierre’s families Armagnac.  We also enjoyed a snifter of it too! 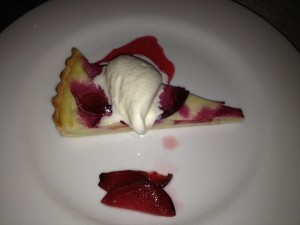 Alas, the fun and festivities came to a conclusion.  It was getting late and it was time to go.  Not before one more picture with Pierre.  Monique was not available and we look forward to seeing both of them again in August. 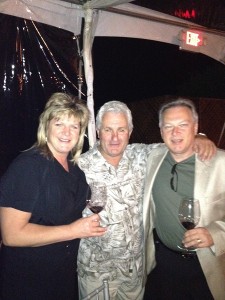 Thank you for your hospitality Verite!