The other day we attended an Olive Oil tasting at a shop in Maple Grove.  I have to say it was very interesting  and we learned a lot.

I had no idea how many health and beauty benefits come from olive oil!

One of the things I learned is that the olives are originally pressed at 55 degrees.   After the second press is considered extra virgin olive oil.  After the second press the maker has to heat the oils for the third press making it “Pure” olive oil.  The final press (fourth) is when the oil is considered light or extra light and at this point there is no real health benefit.  Many of us assume that “light” would be healthier, but it’s not because by this time all of the nutrients are gone.  Another thing I found interesting is the US food and drug administration doesn’t do a great job regulating oil and it really only requires 15% of the “olive oil” in stores to be actual olive oil.  The balance is a number of other oils including vegetable and most commonly canola oil as a filler.  People assume that they are buying olive oil, but they are really buying other added oils!  You must look for olive oils from Greece, where that country requires 100% olives.  I was told that most of the imported oils from Italy are also 100% authentic olive oil.

When we read our invite to the olive oil tasting we were not sure what type of food was going to be served so we decided to stop by a local restaurant and have a quick bite to hold us over.  Of course we decided to have a glass of wine with our food and in Minnesota, establishments allow consumers to re-cork and take the unfinished wine with them.  reviewing the wine list I came across a 2011 Penfolds Thomas Hyland Shiraz.  Never having this wine I decided to buy a bottle, rather than a glass so we could take the remaining wine home.

Sight
The Shiraz color depth was medium with a purple hue.

Smell
The red wine was aromatic, young-fruity. I could smell spice, oak, and dark fruit. 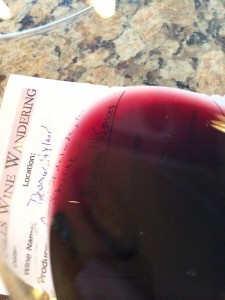 Taste
This Shiraz was not dry.  It was medium-bodied with lively acidity and the tannins were week and soft.  Tasting the wine I had soft mid-palate tannins and a soft silky medium finish.

I rated the 2011 Penfolds Thomas Hyland Shiraz two glasses.  It was just Ok in our opinion.