I like to find winemakers who produce small volumes of wine.  I feel there is a lot of pride when you visit them and they share a bottle of wine with you.  You can imagine how proud they are when they share something they made.  I heard of MTGA wines during our trip to Portugal and Bordeaux.  The host of the trip Todd and another guy Charlie were talking about Todd’s son.  His son was making small batch Merlot and a dry Riesling.  Both said the wine was mighty fine.  Months later both guys again were talking about Todd’s sons Merlot on Facebook.  I piped in and said I need to visit Mike and try his wine.  Mike replied and we started talking about meeting during one of my upcoming trips to Napa.

We scheduled at visit in June at Todd’s winery.  Sometimes Mike will host a tasting at his father’s place and this time was not going to be different.  We had a tasting scheduled there already so the timing was perfect.  Unfortunately a week before the tasting I received a note.  Mike would not be available.  He was out of the area and was wondering if his other brother could host us.  We will have to meet Mike another day.

What does MTGA stand for you ask? MTGA officially stands for “Michael Todd Gustaf Anderson”.  Mike (the winemaker), Todd Mikes dad, and Gustaf is his grandfather.  As the story goes, in deciding what Mike’s name was going to be in 1987 his father and grandfather wanted him to be Todd Jr. or Gustaf Jr. respectively. Mikes mother intervened and he was named after her brother. The label is meant to be tip of the cap to the family and generations that came before Mike in life and winemaking.

Mikes winemaking career started with a small batch of 2010 vintage Merlot and now a Riesling. 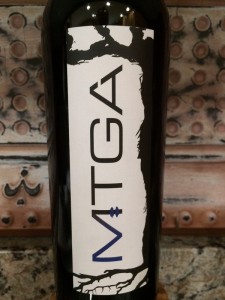 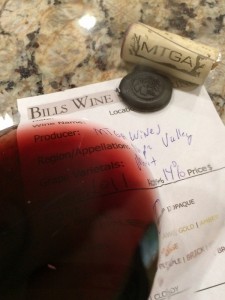 Smell
Moderate to aromatic young-fruity aromas of blackberry, blueberry, with cocoa and spice.

I rated the 2011 MTGA Wines Merlot three glasses.  My next visit I will have to try the dry Riesling.