Last summer, we met some nice people at the at the Fete de la Fleur event at Verite.  Melinda recommended that we stop at the Tamber Bey tasting room in St Helena.  We were driving right by on our way to San Jose that following day, so we decided to do a “Drive by” and check them out.  The Tamber Bey tasting room is located right off of highway 29 on Adams street down town St Helena.

As we entered the tasting room there was a couple sitting at the counter.  We were greeted by one of the staff members who was very friendly.  Since we would be heading to San Jose I decided to share a tasting with Chris rather than have my own.  Once of the things I liked about the tasting was they paired the wine with various flavored cookies.

After enjoying the tasting, we joined their club and decided to buy some wine and have it shipped home in October. 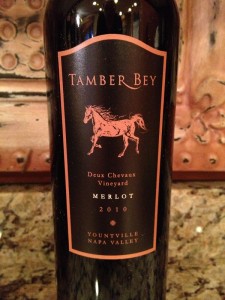 It had been been a few weeks since all of our kids were home visiting so we invited them for dinner Friday night.  Chris prepared spaghetti with a home made sauce.  I was in the mood for a younger Merlot so I wandered down to the cellar to see what we had.  After pulling bottles I decided to try the 2010 Tamber Bey Merlot.  Since dinner was not ready yet I decide to pull the cork and rate the Merlot before we ate.

Here are my notes

Sight
The color depth was medium and my wine glass was clear.  The Merlot had a nice Garnet hue. 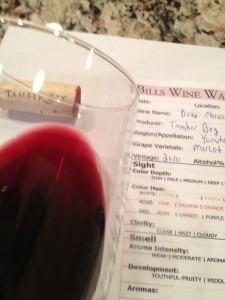 Smell
The 2010 Tamber Bey Merlot was very aromatic.  We could smell Bing Cherry, Almond and Oak.

Taste
The Merlot was very nice.  It was a little dry and full bodied and the acidity was nice.  The tannins were medium and were felt in my mid palate.  The finish was long.  The flavors noted were ripe fruit and Cocoa.

We shared the 2010 Tamber Bey Merlot with Jake, Nick and Bri.  Jake liked the Merlot.  Nick and Bri are just beginning to drink wine so the tannins were a little to much for them.  I think they would prefer to start with a more sweeter wine.  However, Chris, Jake and I really enjoyed this Merlot.

We rated the 2010 Tamber Bey Merlot three glasses.  As the wine sat in my glass and developed more I could have rated it four glasses.