We spend the first part of Saturday with Dave and Heather looking at some camp ground sites on Coon Lake.  They left their site last year and sold the travel trailer.  They were missing the camping life the past few months.  As luck would have it the camp ground has four open sites.  I think they are sold and will be looking for a trailer right away.

We decided to go over to Dave and Heathers for a fish fry.  They were at Fish lake on July fourth and caught a bunch of fish.  Their friends Lori and Joe along with Steve and his mom Betty were joining us too.

After Dave and Heather dropped me and Chris off, we did a little grocery shopping and headed home.  We put the groceries away and wandered over.  We had decided to bring our Sheltie Simba with.  Simba does not get out often and is a shy dog unfortunately.  He needed to be around Bones and Eddie who are very playful and safe with Simba.  Bones and Eddie were good around Simba, I think they were disappointed that Simba would not play with them.  I think a few more visits and he will join the boys.

It was generally cooler out back and we were in the shade.  Lori and Joe showed up and we decided to have a glass of wine.  We started with a sweet white that Lori brought.  After that we had a Pinot Blanc from Michel Schlumberger.  The Pinot Blanc was refreshing and had Lemon hints to it.  After the Pinot Blanc we moved on to a Gewurztraminer from Cosentino Winery.  Last May while we were at Cosentino, Dave wanted to try the Gewurztraminer.  Shane had told Dave it was a dryer Gewurztraminer.  We had mixed reviews and both Chris and I kindly shared our glass with Heather.

After a few hours visiting and drinking whites Dave brought out a bottle he had in the refrigerator.  Dave was chilling a bottle of 2010 Apothic Red. 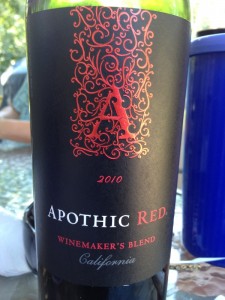 Reading the label the Apothic red was an interesting red blend. 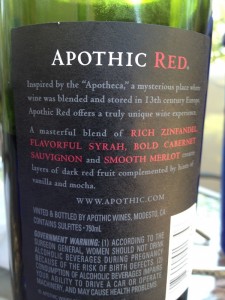 As you can see the blend is an interesting one.  It was a blend of Zinfandel, Syrah, Cabernet Sauvignon and Merlot.  The winemaker did not break out the percentages which I thought would have been interesting. 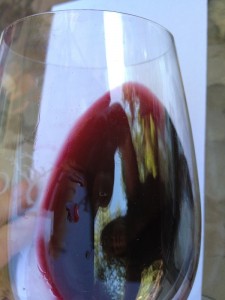 As Dave poured the first glass, I could see the Red Blend chilling the glass.  I immediately could smell the wine before I even gave it a smell.  We were intrigued by the aroma.  I immediately grabbed a copy of my tasting sheet as I wanted to blog the interesting red blend from Apothic. 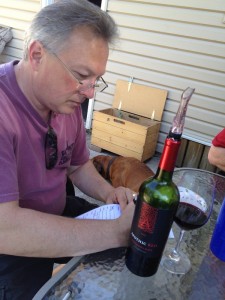 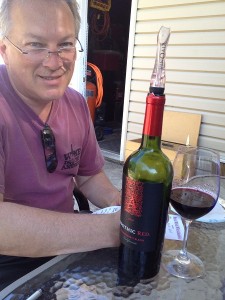 Chris making me smile for the camera.

As I was writing down my initial comments, the Apothic Red color was very deep and Purple.  The clarity of the Apothic Red was very clear.  Smelling the Apothic Red it was very powerful.  You could tell it was a very young red blend.  Some of the aromas were Vanilla, Dark Red Fruit, and BlackBerry.

During my initial tastes I was intrigued.  We all thought it was off dry and sweet.  It just depended on who was tasting the Apothic Red.  You could tell it was a full-bodied red blend.  The acidity was lively and the tannins were medium.  The finish was long and was felt from my mid palate.  Some of the flavors noted were Cocoa, Spice and Tobacco.

The net result was Chris and I were not overly excited.  Heather, Dave, Lori and Joe liked the Apothic Red.

I asked Dave where he bought the 2010 Apothic Red.  He could not recall.  So if the Apothic Red is something you want to try, I would go to their website or call the local liquor store.