The product was provided for free however the review is my honest opinion.

My  fellow bloggers and I who participate with Cellapass TV Live were given two bottles of wine to sample during the show.  The show had two guests along with the host.  The first guest was the Winemaker Kevin Mills from Trinitas Cellars.  The second guest was Judd Wallenbrock – Founder & Proprietor of Humanitas Wines. 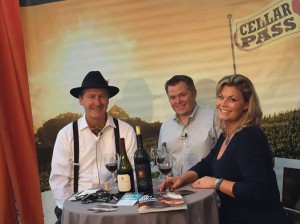 Since I am rating the 2009 Trinitas Estate Meritage I thought I would share Trinitas Cellars story from their website:

Tim and Steph Busch have always had a passion for wine and the wine country, and in 2002 they realized their dream of starting a winery. Trinitas Cellars is a small winery in Napa Valley that is still owned and operated by the Busch family, including their children Garrett and Kenzie.

Trinitas celebrates the connection among sun, soil, and humanity by working closely with its grower society throughout the Napa Valley and other wine growing regions in Northern California. Furthermore, Trinitas sources a broad range of varietals from the regions where climate and soil conditions are most favorable. Small quantities of these exceptional grapes are then handcrafted into an approachable, California wine to be enjoyed as an aperitif or with food. Some of our best wines come from historical vineyards in Northern California with a selection of vines that are over a century old.

Trinitas Proprietors, Tim, and Steph Busch balance their resources to grow their business, benefit the community, and honor and serve God in all they do. They have established the Trinitas Philanthropy Association and Charity Program as part of their creed. 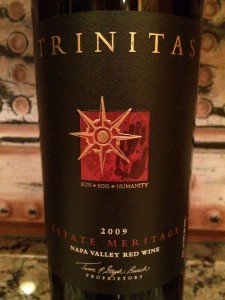 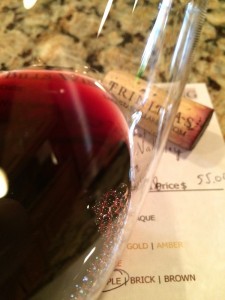 Smell
The Meritage was very aromatic, young-fruity with aromas of dark fruit, jammy, cigar box.  I loved the bouquet.

I loved the fact that the Meritage alcohol was low.  I was happy it was a Friday night so I could enjoy the wine throughout the night.  I rated the 2009 Trinitas Estate Meritage four glasses. 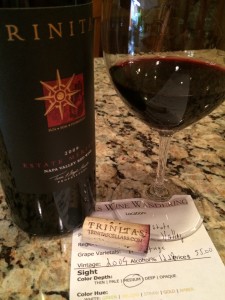