Chris and I were introduced to PlumpJack by our friend Mark after he left Cosentino Winery to work in their hospitality room.  John and Jennifer were accompanying us on their second trip to Napa valley over Labor Day weekend in 2010. 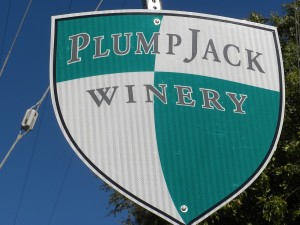 PlumpJack is located off of the Oakville Crossing road just by the Silverado Trail.  It as a fairly large tasting room and you are always welcomed when you stop by.  One thing that I find interesting is many of their bottles including half of their Cabernet Sauvignon Reserve wines and half Chardonnay are topped with a screw-cap.  PlumpJack claims the quality of their wine should not show any difference between a cork vs. a screw-on cap.  I purchased a set including a bottle with a screw cap and one with a cork, each of the 2007 Cabernet Sauvignon and can’t wait to see how well they age together.

Our youngest son, Andrew was over the other day.  He was hoping to earn a little money doing some chores.  Earlier that day we decided to have steak and shrimp on the grill.  As I was finishing up my last meeting of the day Chris had Andrew help prepare dinner.  After a long week of work I was feeling like having a nice glass of wine to wind down.  Since we were going to enjoy a nice steak I wanted a varietal that would work with both Shrimp and Steak.

As I wondered down to my cellar I was pondering what I should have and went back and fourth a few times in my mind before deciding on the 2007 Merlot from PlumpJack Winery. 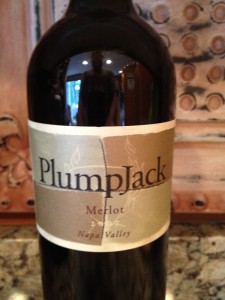 Chris had just put the skewered potatoes on the grill so we had some time to wait.  I wanted to decompress from the week and enjoy the outdoors on our back patio.  So it was time to pull the cork on the 2007 Merlot.

As I pulled the foil and cork I was surprised to see how the wine had worked its way up the cork in the neck of the bottle.  When we were at PlumpJack I purchased a few bottles and brought them home with our luggage and thought maybe the checked luggage got too warm?  I doubt it… 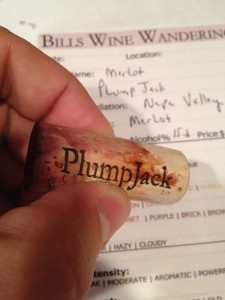 None the less it was time to grab my tasting sheet.  I was slightly concerned but after smelling the bottle of Merlot was convinced it was just fine!  Here are my notes on the 2007 PlumpJack Merlot. 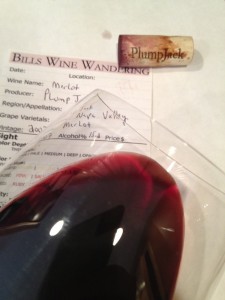 As I poured the wine the color was a nice Garnet color.  The depth was deep and I did not notice any sediment.  So far so good!  Smelling the Merlot it was still very aromatic and fruity.  Some of the aromas were Black Fruit, Blueberry and Bilberry and the aromas were making my mouth salivate.

As I took my first initial sips the Merlot was medium to full bodied.    The tannins were soft and could be felt in my mid palette while the finish was long.  I could taste Bright fruit and one thing that I immediately noticed as did Chris, was that the Merlot was very rich.  We were very happy with this choice!

The price of the PlumpJack Merlot is around $50 per bottle.  The alcohol level is 15.2%, which is a bit high but I did not taste nor smell the alcohol.

We both felt the 2007 PlumpJack Merlot was three glasses.  I think if I had a little more tasting time with the Merlot it would have been a four.  The PlumpJack paired great with dinner.  Although I was afraid to try the Broccoli – it was pretty good with a light drizzle of cheese sauce. 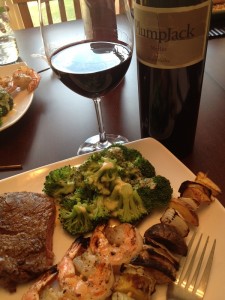