In October, we started a bi-monthly wine and appetizer gathering with some friends who also enjoy wine.  Some of the people are new “Wine friends” to me and Chris.  We love the fact there are people who live close and appreciate wine as we do.

This particular gathering was at our house.  Chris spent the week working out the details of what appetizers we would share and she decided to prepare her homemade Flat Out pizza’s.  There was a new cheese dip she wanted to try out because she intended to serve it at an upcoming wine dinner we would be hosting in December.

Dave and Heather came over earlier so we could start the fermentation process on the Lodi Cabernet Sauvignon that we are making.  As we were preparing the juice we decided to enjoy a glass of 1997 Cosentino Cabernet Franc, which was showing excellent! 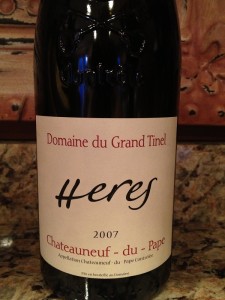 Then when the others arrived, I decided to share the first bottle of wine with the other friends.  I had purchased a couple of bottles of Domaine du Grand Tinel Chateauneuf du Pape Cuvée Heres 2007 from Wines Till Sold Out (WTSO.com).  I can’t recall the price I paid, but generally, the wines are offered at half of the retail price and with a certain amount of bottles (this case included) WTSO will include FREE shipping.  Earlier Saturday I placed a bottle into the wine cooler/chiller.  I had a feeling that the Domaine du Grand Tinel Chateauneuf du Pape Cuvée Heres 2007 was going to show well so I wanted to make sure it was chilled correctly.

When I purchased this wine, I did a quick Google search and found a couple of reviews that assured me that I had bought a gem.

Wine Advocate
The limited cuvee (300 cases) of 2007 Chateauneuf du Pape Heres comes from 105-year-old Grenache vines. The wine is aged totally in vats as opposed to small barrels or demi-muids, and should have even greater longevity than the Alexis Establet. The 2007 should merit a score in the mid- to upper-nineties in 3-4 years, although it is tightly knit at present. Enormously rich, broodingly backward, and somewhat monolithic, it reveals a dense purple color as well as gorgeously pure fruit, mouth-searing levels of tannin, and surprisingly crisp acids. It is a blockbuster in the making, but patience will be required. Anticipated maturity: 2013-2030.

Wine Spectator
Rather polished, with a large core of ripe plum, blackberry and mulled currant fruit backed by bittersweet ganache and braised fig. Very toasty, but with the density of fruit for balance, as well as plenty of sweet spice notes. A full-throttle style. Best from 2010 through 2025. 525 cases made.

Here are our combined tasting notes.

Sight
Color depth was medium and had a Ruby hue.  You could see the Grenache was becoming lighter as it reached the edge of the glass while the meniscus very clear. 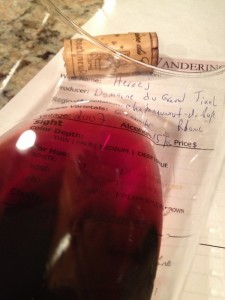 Smell
The aroma was moderate and smelled young.  I noticed a “Rich Toasting” nose as well as Spice and Rhubarb.  Dave also thought he could smell Caramel Apple (probably from the toasting).

Taste
The Grenache was full-bodied and the acidity was perfect.  Our mouths watered as we drank the 2007 Domaine du Grand Tinel Chateauneuf du Pape Cuvée Heres.  The tannins were medium but soft and the flavor intensity was good.  We could taste Smokey, Leather, Red Cherry, Red Current and spices like Pepper.  The finish was long and flavorful.

The serving temperature was 59°.