It was the day before Thanksgiving.  We were fortunate to have our friend Dwayne offer to smoke our 22-pound turkey.  We truly appreciated the offer as I can’t say how much stress that just eliminated the day of Thanksgiving.  When he had mentioned it last Saturday I immediately said yes and asked when do we bring the bird over?

We picked up the smoked turkey and wow, it turned out perfect!  I do not think we could have done such a nice job with our small smoker.  We brought it home and decided to strip the meat and Chris wanted to make a broth out of the remains for a Beer Cheese Soup that our daughter Michelle had been craving.  The smoked carcass broth would be a perfect base!

As we were wrapping up I decided to wander down to the cellar and grab a bottle.  As I was looking I recalled Joe’s brother Mike sending me a note that he just received his Titus shipment and was a happy man.  Recalling his comment I decided to grab a Titus. 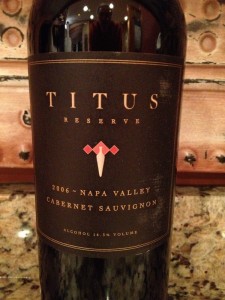 I ventured back to the kitchen where Chris was finishing up the prep work for Thanksgiving.  I grabbed my tasting sheet, corkscrew, and a Vinturi and prepared to take some notes. 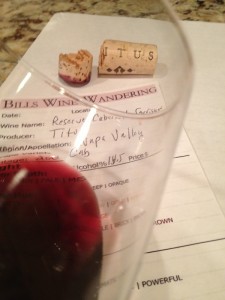 Sight
The color depth was medium with a Garnet Hue.

Smell
The aroma at first was just moderate and it did not jump out of my glass.  The Reserve Cabernet Sauvignon did smell fruity and young still.  Some of the aromas were Bing Cherry, Black Berry and as a slight Oaky spice.

Taste
During my initial taste, I noted it was not dry.  The wine was full bodied and the acidity was nice (not tart nor flabby).  The tannins were medium and could be felt on the side of my palate over time.  This Cabernet was flavorful with a medium finish and I could taste a little oak and spice along with dark chocolate.  It also had a little jam notes from a jelly.

I also want to say the Reserve Cabernet developed over the evening and became quite nice.