We had been looking forward to seeing our friends at Verite since the Fete De La Fuer event in June.  The recent upcoming “Vintage Verite at the Lake Event” was celebrating the 2002 vintage.

Early last spring we received an invitation in the mail with the following comments:
The 2002 harvest lasted from September 9 to 23, starting in Knights Valley with Merlot and finishing with Cabernet Franc from Alexander Valley. It was a drier season than average; the spring was mild, and the summer was warmer than in 2001. But the wines have beautiful, balanced acidity from the influence of the Pacific Ocean, which brings a cooling effect to our vineyards at night.

At Vintage Vérité, we are celebrating La Muse 2002 and La Joie 2002, which have deep color, are very fragrant and floral, and impart distinctive fruit flavors expressing the characteristics of each varietal of the blend, with supple tannins and a long finish. Please join us in experiencing how these wines have evolved over the past 10 years, and discover how they will continue to age for another 10 years.

Of course we immediately notified Teresa and planned our trip back to Sonoma!

It was finally Saturday morning, the day of the event.  We had slept in that day because we stayed up late with friends from Santa Rosa and Manhattan, NY.  The event was to start at 11:00am.  We left our Windsor Romantic Cottage around 10:45am eager for the day.

We arrived a few minutes after 11am and were greeted by Pierre and Monique.  It was a happy moment and it felt like we we were home!  Dale ran over and gave Chris a big hug and we saw Kim shortly there after.  Kim offered us both a glass of Champagne which we graciously accepted.  Not to long after Dale came over and asked board the charter bus to take us to Verite Lake. 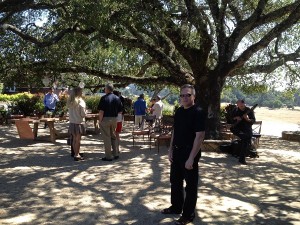 After a brief ride through the estate, we arrived at Verite lake and headed towards the welcome table.  Timothy greeted us and offered us a glass of Pierre’s Rose’.  This Rose’ is amazing and one of our favorites!  I would like to purchase some, but they keep it for special events.   I was intrigued to see the Rose’ finally had its own label.  Monique informed us that Helene’s boyfriend designed it! 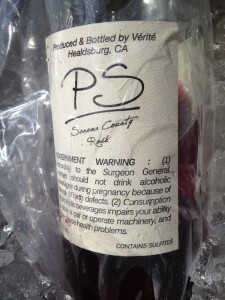 After getting caught up with Timothy we proceeded to walk around the area and headed into a large tent that had been erected for the event.  Inside were many tables and a couch.  Chris decided to sit down and relaxed with a magazine.  She was looking pretty amazing so I decided to take some pictures. 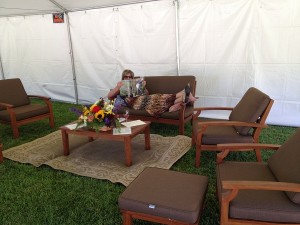 As I was taking pictures I noticed Pierre was on the cover of the magazine.  I asked Chris and right away if she realized that and she replied “yes, of course!”, although the article was in French, there was an English translation tucked inside as well.  We really need to learn French.  I had three years of French in Jr High School but since I had no one to talk to you, I’ve lost most of what I had learned! 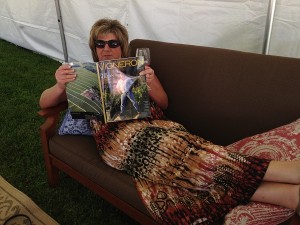 The day proceeded with many types of food and more Verite wines to drink.  I have to admit I was tongue tied when a French lady came by with a video camera as Pierre and I talked.  She asked what I like about Verite, and for the first time I was at a loss of words!  I’m probably Verite’s biggest fan (and Ambassador per Monique) so I was disappointed that I did not do a good job of expressing my appreciation for these great wines!  Thankfully Pierre stepped in and spoke to the gal (in French of course).

Our lunch was excellent.  There were various sliders, cheese, and shucked Oysters.  I think my favorite slider was the Lamb with Sweet Potato fries.  I know for a fact Chris loved the shucked Oysters!  Chef Justin did a GREAT job. 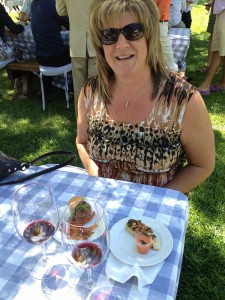 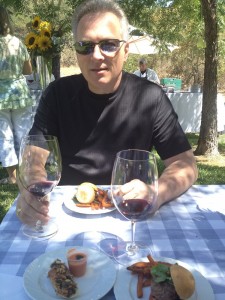 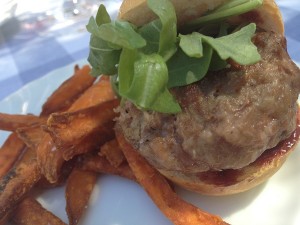 As the day progressed Chris and I walked around visiting with various guests.  Monique’s cousin from France attended the event.  I cannot recall his name but he and Monique were very close and she told us he was much like a brother to her.  She explained that he was friends with Pierre and introduced Monique to him.

Teresa had a table setup with a game called Playaboule.  Playaboule is the Italian version 0f Bocce Ball.  Fortunately Chris and I had just spend a day playing with Dave and Heather at the lake so I was practiced and ready to go.  Monique’s cousin and I played against two other guests.  I am pleased to say at the end of the day we won 21 to 9!  We had a great time and enjoyed playing together. 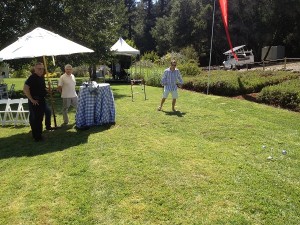 There was time to just hang out and relax.  Everybody was happy and we enjoyed the Le Muse (Chris) and the La Joie (Me).  We  headed to a couple chairs facing the lake.  Sitting there I was imaging how it must be hanging out in the vineyard at Chateau Lassegue in Bordeaux France.  We hope to visit the Estate next year.  Chris was “checking in” on Facebook and updating our status. 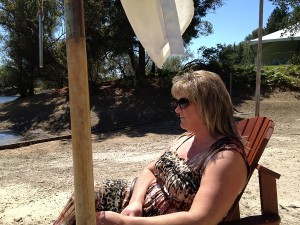 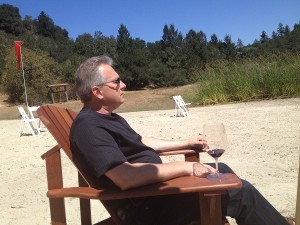 As our day was winding down, we enjoyed some of the specialty deserts and like everything Verite, the treats were over the top.  Each of us had a small plate of desert that looked like a small hamburger and fries.  The condiments (ketchup and mustard) were a red raspberry and a yellow sweet dipping sauce that complimented the short bread butter cookie “fries”.  I can only say wow! 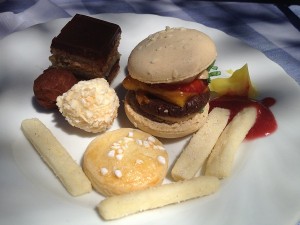 We spent a little bit more time visiting with Timothy, Kim, Teresa, and Dale who do an excellent job at Verite.  We wish we could do more for them.  We couldn’t resist having another taste of the Rose’ before we left as it was pretty warm and the Rose’ was refreshing!  Chris and I were very happy, but sad the event was winding down. 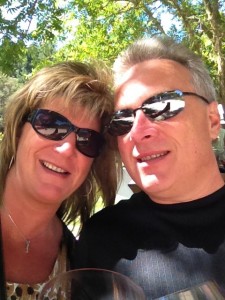 We ended the event with one more taste of the La Muse and La Joia. 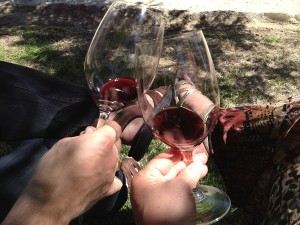 We ventured into the courtesy van that took us back to the tasting room.  My mind was already thinking about the next event.  Monique and Pierre have discussed traveling to Minnesota for some time off this winter and we truly hope they come see us.  Even though it may be cold outside when they can come, spending time with our dear friends so that they could really relax and escape would be priceless.  I am already thinking and planning on an ice fishing adventure on Lake Mille Lacs.  We want to be sure Pierre catches some Walleye and Northern Pike and then we could have a great fish fry with some of their Verite wines!