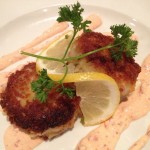 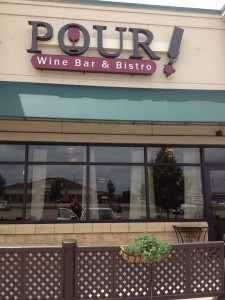 SPECIAL FEATURES:
Handicap accessible: Not sure.
Parking: lot
Vegetarian options: Yes also gluten free
Kid friendly: Not in my opinion, but there is a limited “kids menu”
Liquor served: Beer & Wine
Wine List: “Pretty good with a nice variety” per Bill.  There were wines from CA, Italy, France Portugal, Germany, Austria and more!
Outdoor seating: No
Reservations: Not sure
Splitting fee: none.  They did a great job of providing us with plates for easy sharing.

Unique: The offer Wine and Beer Dinner and Tasting events at a reasonable price.  They also offer a “Vineyard Lunch” on their menu, which is “Everything you want when you’re sitting in the vineyard having lunch meats, cheeses, fruit and bread” for $16

Since she knows that Bill and I are big food and wine lovers, our book keeper Kristy brought us in a paper “Pour” menu that she had grabbed while she and her boyfriend dined at this newly opened establishment near her home.  It was easy to read and contained suggested wine pairings with many of the dishes.  Both the food and wine menus were spotted with wine rings, as though some wine had been spilled down a glass.  They offer a nice variety of wines served by the glass as well by the bottle and they have choices of wine flights and after dinner wines, but not much variety for desert wines.  Bill looks for and appreciates a quality clean wine glass and theirs meet his expectations!  Though we’re not huge beer drinkers, we understand that the beers come from a local brewery in Roseville.

The renovated space is customized and “designed by mom mainly” to include a wine theme that is warm and inviting.  It includes many tables as well as the bar made from wine barrels.  The walls are designed with photo images straight out of the vines and it’s overall feel is of wine country.  They created a wall made of wine case panels in an attractive pattern that lures you down the hall.  They opened for business on March 18th, 2013.

Pour is a family owned and operated neighborhood business run by a husband and wife team who “love food, wine and entertaining”.  They decided to “do what comes naturally for them; cooking and entertaining and most of all visiting with friends and neighbors”.  They have at least one daughter; Lauren who has a vibrant personality working within the restaurant.  She explained that her dad Phil was the wine guy and told us of a winery he has ownership in called Christopher Creek in Calistoga, CA.  We, nor our friends who live there could confirm such a place, but we heard that he stops and visits with folk at their tables and we look forward to meeting him during another stop!

I particularly enjoyed the fresh herbs in the planters out front and I assume that they are used in their dishes.  We were told the chef is a local young guy and we thought the food was great.  The menu is organized by small plates (bites, appetizers, dips and salads), mediums (sandwiches), and entrees.  It is somewhat limited, but they offer specials including seafood at market prices.

We started off with:  We opted to have a variety of small bites to share.

I spotted the special on a table adjacent to us, which was a “Burrata”.  (Burrata is a fresh Italian cheese, made from mozzarella and cream.   The outer shell is solid mozzarella while the inside contains both mozzarella and cream, giving it an unusual, soft texture.)  Theirs had sliced heirloom tomatoes around it and looked tasty!  Our hearts were heavy when we heard from aother server that they were sold out and we opted against a Caprice salad that he recommended because he confirmed that the mozzarella cheese isn’t made in house.  (That would be special!) 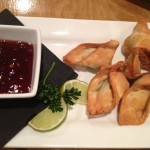 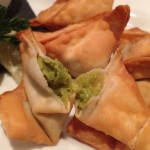 This made me wonder “Why didn’t I ever think of that”!  Lauren explained that this is one of her favorites and that they have been making these at home “forever”.  The wontons were filled with a guacamole like stuffing that had been combined with little melted bursts of cream cheese.  The outsides were perfectly crispy and cooked to golden brown.  The reduction honestly tasted more to me like it may have had a chipotle and I couldn’t note the Tarragon, but it was delicious none the less.  Bill doesn’t typically eat avocado’s but he made sure he got his share of these!  We wished that there were a few more on the plate. 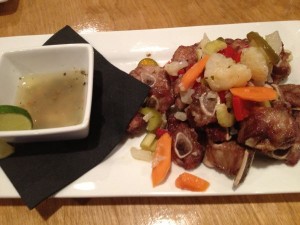 These were delicious, but there is not much to them.  I think the price is just a bit high for the quantity.  We both enjoyed the spicy, pickled vegetables on top, though there is no mention of them in the description.  Prepare to eat the tips with your fingers because there isn’t a neat way to chew the meat off with a fork.  We didn’t eat much of the dipping sauce as there was the same flavor on the garnish of vegetables and actually enjoyed them dipped in the strawberry reduction that came with the wontons.  (I followed Bills move.) 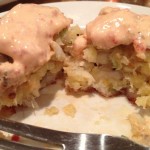 These “rocked”!  They were petite to say the least, but they were delicious.  The outside was cooked to the perfect crispiness and the center was moist and flavorful.  There were nice pieces of fish and both Bill and I had to refrain from licking the plate clean of the roasted pepper sauce.  It was magnificent! 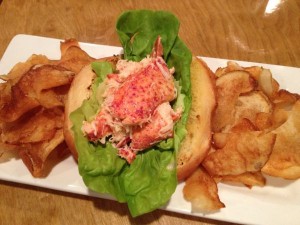 It’s not too often that we’ll drop sixteen bucks on a small sandwich, but this was a good choice.  It was short of a hot dog bun and only about the size of my iPhone really.  If it was all I was ordering, I wouldn’t be sharing. It contained a generous portion of lobster meat, which appeared to be the claw.  The flavors were muttled together well and sat on a bed of sweet bib lettuce.  The bun was soft, yet toasted with a little crisp edge and the butter complimented the sweetness of the fresh tasting meat. 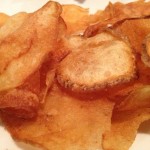 The sandwiches are served with their in house Truffle Potato Chips, which are a bit adicting.  Bill said they should be called “Crack Chips” because that is what he refers to while eating the truffle fries at Capitol Grille in Minneapolis; “Crack Fries”, once you start – you can’t stop!

Some of the other items we spotted being delivered to the adjacent table included the Berker Berger served with fries and the cedar Planked Salon.  From what they told us, these too were delicious.

Dessert:  We didn’t listen to what was available and passed when it was offered.  I did over hear that all the deserts were brought in from a local area bakery and am a bit curious which one in Elk River. 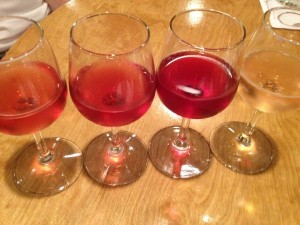 It was a warm day so we enjoyed the Rose’ flight ($14) It included a Mulderbosch Cabernet Rose, Penascal Tempranillo Rose, Topiz Malbec Rose and Berlucchi Sparkling Rose.  My favorite was the Temp.

Over all, not a cheap lunch by all means – but a treat and something special for this neck of the woods.