During a trip last fall we had experienced an amazing barbecue lunch at Continuum.  Following, we ventured over to Yountville.  We first had a brief tasting in the Girard Tasting Room and then we decided to visit the Beau Vigne tasting room directly behind Girard’s where we had visited in the past due to a complimentary tasting certificate Girard had shared.

Chris and I were at Beau Vigne last January.  We both loved the “Cult Wine” and I was looking forward to Robert and Carly trying it too.

After our visit to Girard I knew we had to stop.  We wandered over with anticipation of some excellent wines.  As we entered the tasting room, an artist stood to the right of the room painting a picture of “Blue Eyes” Frank Sinatra.  Well, Chris was drawn to that painting because she is a huge fan of his! 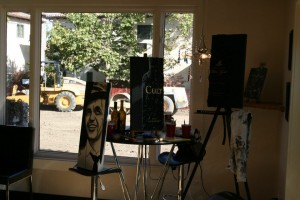 I was drawn to the painting Richard was currently working on, which was a painting of “The Guest Cottage 2010” 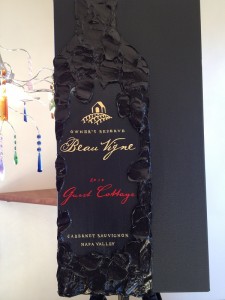 We were greeted by Oscar who was running the tasting room that day.  I asked if Beau was in but we had just missed him.  We proceeded with our tasting, beginning with the Chardonnay.  As we tried the wines we began talking to artist named Richard.  I immediately wanted him to paint an image of my favorite “Verite”.  After a few minutes negotiating on a price, we were set!  I love wine and art!

The following Monday I handled the payment arrangements for the painting and we now had to decide what would inspire our new art.  We decided to send the picture below to Richard.  This is my favorite wine, it was a beautiful day out on our patio and a great excuse to indulge! 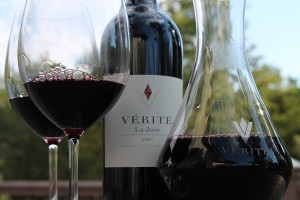 We captured the picture above and sent the high resolution image to Richards wife Nancy.

The 2007 Verite La Joie was rated 100 points by Robert Parker and Verite was the first winery in Sonoma to receive a perfect score from Parker!

The waiting began as Richard required six weeks to complete the painting.  I could not wait!   Finally Nancy sent me an email stating that the painting was shipped.  The painting was to arrive at Chris’ office on a Thursday.  The week seemed to drag out as I was anticipating the arrival of the new painting.

At around 2:00pm that day Chris sent me a picture of the painting.  It looked awesome!  When she got home I immediately opened the box and placed it on my counter. 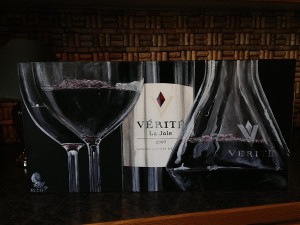 The painting is hanging in my house in the hallway heading to my cellar.  Every time I go down stairs I am greeted by Richards painting and warm memories of the numerous wonderful times we visited our friends at Verite, as well as the delicious wine that it is!

Four Plus! Valentines day was on a Friday this year.…

Last year Chris and I hosted a wine dinner at…