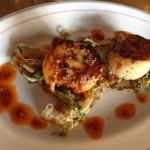 Neighborhood: Uptown
Cuisine: New American, Wine Bar
Cost: $$ = $11- $30 – Moderately priced (average entree $12-$34)
Three Forks = A Value.  Merits a drive if you’re looking for this type of food (This evaluation is based on the Wine Event only and not a normal dinner service)

Tuesday Minnesota Made Hotdish $9
Chef’s Tasting $45 per person: Allow the chef to select a five course menu for the table
Brunch: Saturday & Sunday 10AM to 2PM

We dined for the first time at the Spill along with friends while attending a special “A to Z Wineworks Wine Event” recently.  The event was held on our son Nick’s 24th birthday and we were really bummed that we couldn’t take he and his fiance Bri along after being told the event was sold out.  He and Bri have recently both become fans of wine and we had just given him a gift of A to Z Pinot that he really enjoyed.  Bill and I have attended numerous wine dinners and understand limited seating, but place was different.  The restaurant was open to the public during the event.  Our party of four was seated at a four-top table near the bar. 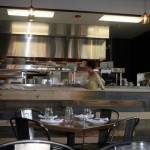 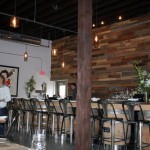 There were other larger groups participating in the event around us, as well as other patrons ordering off of the normal menu.  The problem we had was that though they were “sold out”, a two-top table sat empty next to us the entire evening and it certainly could have been occupied with and additional two guests pulled together with our table to make ours six.  We did really appreciate the open kitchen and the overall decor of the place was clean and inviting.  The waiting area had a ceramic dispenser of fruit water and the bathroom doors were inscribed with chalk, but we did think it was odd that we kept seeing folks of the wrong gender use the clearly marked rest rooms.  The overall feel is very rustic with wood and stainless steel; but it was unfortunate that our seats were not very comfortable at all.

We enjoyed this event, but it was different than other wine dinners we’ve attended.  Jim, from the distribution company was a familiar face that we’ve seen at previous dinners; and there was a representative from the winery acting as our hosts.  Rather than the typical experience of the wine maker talking about his wines, while the chef describes the cuisine of each course that we are used to, the two gentlemen roamed from table to table to allow for questions or comments.  We were introduced to the owner Katie Greeman, a Minnesota native who seemed very nice.

The event consisted of ten “courses” paired with wines and while there were some inconsistencies in the food, we thought it was good.  We haven’t eaten at the Spill for a “normal” dinner service, and to e honest, we’re a bit reluctant based on the majority of posted reviews that were less than stellar. 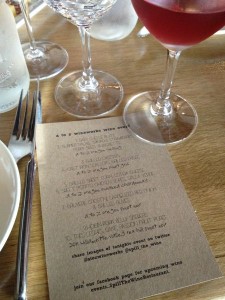 We were a bit early, so Bill started us off with a Malbec Rose.  It was a 2011 vintage from Famiglia Meschini.  Delicious! 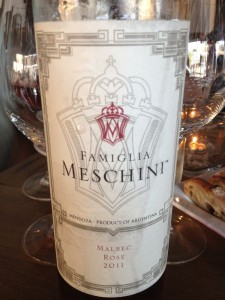 Once the event began, Jim began pouring the first wine that was to pair with the food.  The first was an A to Z Oregon Riesling 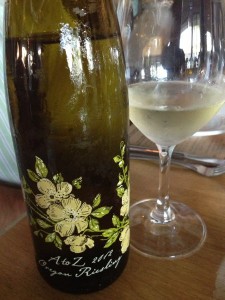 The food that paired with the wine was: 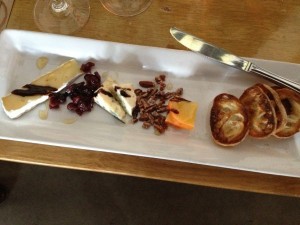 It was nice.  We could have had a few more Crustini’s for the group, but it was flavorful. 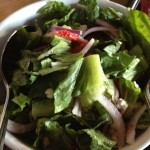 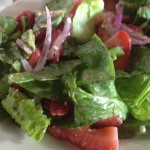 This was served family style within bowl for the table.  It was good, but unextraordinary.  I’m not a huge fan of raw onions and they were in abundance but I do understand that is a personal preference.  The salad may have benefited from a bit more dressing.

The second wine was an A to Z Oregon Pino Gris 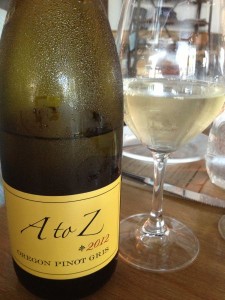 The food to pair with the Pino Gris was: 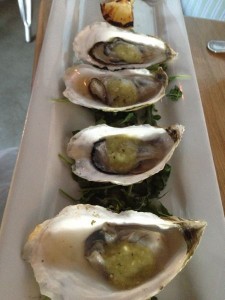 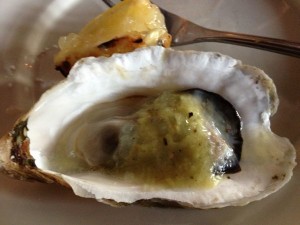 The course offered two oysters per person.  Both Lois and I were pleased to have four, because neither Rich nor Bill would go near them!  We thought that they were very good. 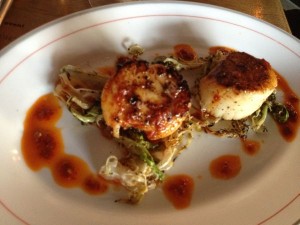 These were delicious!  Each couple split a plate, but all of the scallops varied in size significantly.  They were cooked properly and were drizzled with a delicious Mojo Picon (Garlic Sauce) that was superb.  Mojo Picon originated in the Canary Islands.  The basic recipe consists of olive oil, large amounts of garlic, paprika and cumin.  Flavorings such as vinegar, lemon, orange or lime juice may be added.  It is commonly served with fresh bread rolls at the beginning of a meal,  but it was a perfect marinade for the scallops! 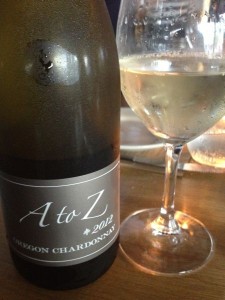 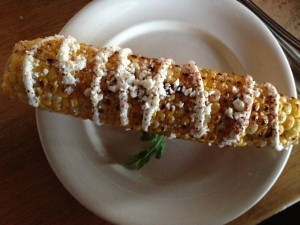 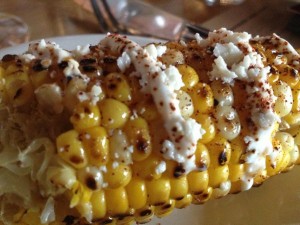 Each guest was served an ear of corn.  The in-season corn was fresh and delicious and the char added great flavor!!  The Cotija cheese is dry and firm adding a bit of saltiness.  Cotija is a hard cow’s milk cheese that originated from Mexico, so we could see the direction we were heading with the food.  Though this was Bills favorite, he was unhappy he received a small ear compared to the others. 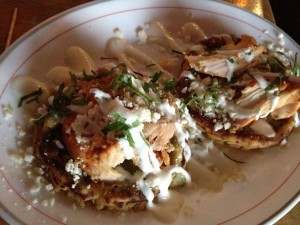 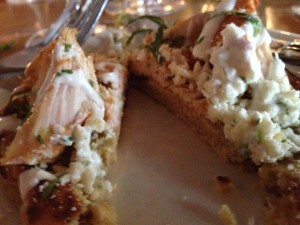 Sope is a traditional Mexican dish originating in the central and southern parts of Mexico.   It sort of looked like an unusually thick tortilla with chicken and some sort of vegetable on top.  Mexican salsa verde is based on using tomatillos that may have been included, but we weren’t sure.  Additionally, we didn’t identify sweet potato.  Unfortunately, they really were just not very good.  Each persons portion was one, but none of us finished so we considered this a miss. 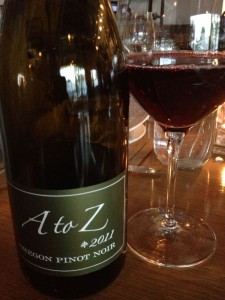 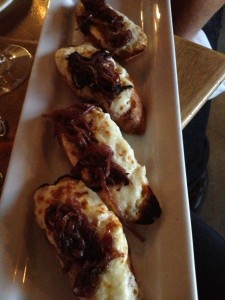 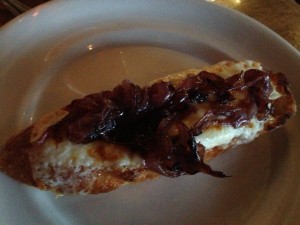 These were delicious!  We are big fans of Crustini’s!  The toast was perfectly crispy on the outside and soft in the center.  It had just enough garlic and who doesn’t like broiled Gruyere?  It’s the same cheese you typically find broiled on top of French Onion soup.  It’s sweet but slightly salty, with a flavor that varies widely with age. It is often described as creamy and nutty when young, becoming with age more assertive, earthy and complex.  The onions were prepared perfectly and this dish left us all wanting more! 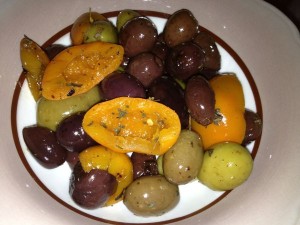 I’ve never had grilled olives.  They were good, but I thought it was an odd placement of the order of the dish.  Again, Lois an I were the only ones nibbling and our guys wouldn’t touch them.  There was a variety of types of olives with flavors from mellow to intense.  It seemed odd that we were changing in so many ethnic directions.  Kalamata Olives are Greek. 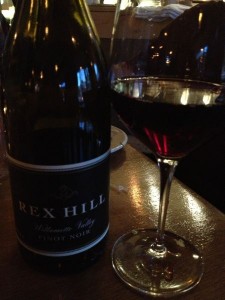 The foods paired were: 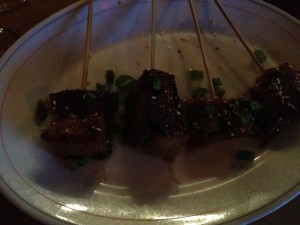 These were flavorful, but very inconsistent in size!  (I ate the smallest, third from the right in the image)  I would have been embarrassed to call this a “course”.  Mine was literally not much larger than a standard dice.  Pork Belly is a boneless cut of fatty meat from the belly of a pig.  It is popular in Asian cuisine, hence the Hoisin.  What I could taste was flavorful, but I didn’t really get much meat along with my piece of fat. 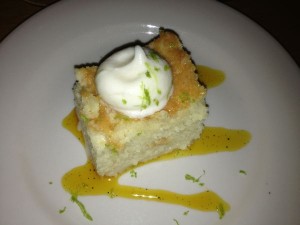 This was delicious!  Tres Lches Cake is Spanish, “three milks cake”.  (so why throw in the olives and hoisin in the middle of the theme anyway?)  It is a sponge cake that in some recipes is a butter cake.  It’s soaked in three kinds of milk: evaporated, condensed and heavy cream.  Tres Leches Cake should be ultra moist and this one was pretty good.  The Passion Fruit Puree was very flavorful.  This was a hit and I could have eaten more!

This restaurant originally opened in 2007 in Downtown on Washington Avenue where it apparently thrived serving regional wines.  The current menu consists of small plate foods.  After six years, Spill the Wine moved to Uptown, seeking a neighborhood destination and to extend its late night hours.  They are now located in a completely overhauled space that was formerly a bike shop, located on Bryant Avenue South and Lake Street.

As far as outdoor seating, there are a few sidewalk tables on Bryant right now, but thy say that construction is starting on a more fully formed patio.  They plan to re-do the parking lot (which we weren’t sure was theirs, because it isn’t properly marked so we parked on the street) and will be putting up a pergola out back with room for four more tables.

Other reviewers have expressed that they are overpriced compared to the other restaurants in the neighborhood and some of their servers might be less than stellar, but brunch got raving reviews so perhaps we’ll be back to try that!