Neighborhood: Northwest Metro
Cuisine: Italian. Brazilian Steakhouse
Cost: $$$ (average entree $16-$25)
One Fork = I would probably not eat here again, because the food is hit and miss

Unique: The Brazilian Steakhouse idea is great, but this one is not the quality we would have expected for the price!

Overall, it was just “OK”.  We had a Groupon and frankly, if we had not we would have been terribly disappointed for the price!

We started off with:  The hot complimentary appetizers that were delivered to the table were delicious initially, but then began being replenished luke-warm until we asked for fresh ones.  I thought it was odd that these were served even before our water, wine and/or drinks were delivered. 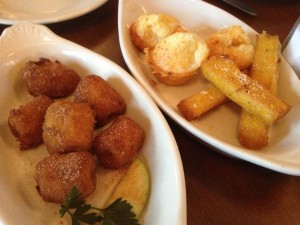 The complimentary Polenta, which is a Brazilian style of corn meal prepared “the rodizio way” (in the form of fried sticks) and the  Pao De Queijo – Brazilian Cheese bread made with yucca flour and cheese in the form of little two bite muffins were delicious.

We also received the Banana Frita’s that were deep fried I believe and were not glazed.  They seemed to have a thin crust and were sprinkled with a semi sweet something.  The bananas were ok, but not terrific.  I would rather sample them following a meal and some of our group didn’t care for them at all.

The salad bar items were just mediocre.  They list 24+ items on their on line menu on the bar, but none were so memorable that I had to highly recommend anything or go back to revisit. 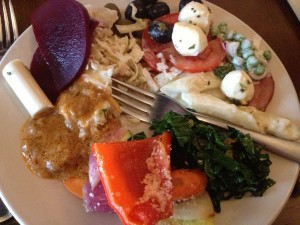 The Salada De Queijo Fresco, which is a fresh mozzarella salad was decent, but not superior and I am confident that they are not making in house mozzarella!  Notice the one Palmito on the left corner of the pate that is hearts of palm; these are the same as if you buy them out of a jar at Costco – so I would suggest that you pick some up and experiment with them yourself at home!  Same goes with the pickled beets because these are just not special.  The cabbage salad was interesting and flavorful as it contained some pineapple and coconut.  I had to try the Couve, which is sauteed collard greens and bacon.  (But I really don’t think there was any bacon) It’s a traditional side to brazilian feijoad but these were luke-warm and not really very good at all and I usually love dark green vegetables!  I sampled a bite of the Estrogonofe De Frango Ou Carne – chicken (also available in beef) strogonoff and skipped the Pure De Batata – creamy whipped potatoes.  As a potato lover, Heather said these were her  favorite item on the entire meal.  (She also noted that she could have made them at home herself.)  I took a small portion of the Legumes Com Parmesao, which is grilled vegetables with parmesan cheese – but they were not “grilled” or have any char marks on them.  And they weren’t served hot.  I found myself thinking about Robert Irvine on Restaurant Impossible whipping out a thermomoter, because I question if the hot items on this bar were up to code?!  It is a sad day for me when I have to say sincerely that there was nothing else worth sampling on that entire bar.  It was so disappointing!  I realize that this sounds really bad, but it just was!

Of course the meat is supposed to be the star of the show at a Brazilian steakhouse and though there were a couple of exceptions, the meat overall was a complete let down at Rodizio.  Bill and I have traveled to the country of Brazil and enjoyed an authentic Brazilian steakhouse, so perhaps we’re just spoiled.  We haven’t tried Fogo in downtown Minneapolis yet, but everyone we talked to and all the reviews we’ve read state that if you’ve ever been, this place just does not stack up and it simply doesn’t have the level of quality one would expect.

I’m usually not a big fan of sausage, but the Linguica (ling-we-sah) a very mild and flavorful Brazilian sausage was actually pretty tasty and everyone seemed to enjoy it! 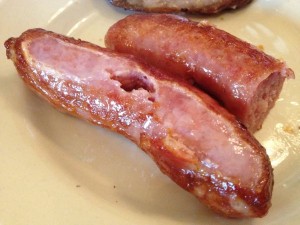 Overall, some of the quality of the meats were decent, though we found many of the cuts to be flavorless.  Much of the beef, which is what we seemed to get most of delivered was cooked “well done”, while most of us prefer rare to medium rare instead.  So much of the meats lacked real flavor and we had to add salt to enjoy it.  I was shocked that the service from the gauchos was not as good as the reviews I had read.  Why they don’t they ask what doneness each guest prefers is beyond me.  They would come by and simply ask if we wanted some of what was on their skewer, but didn’t give us the time to say what temperature before dropping it onto the plate.  I even noticed a couple people’s meat fall onto the table nearby as the  gauchos sliced, rather then the guy instructing them on the use of the provided tongs.

These three images below from their website, lead you to believe you’ll experience some quality meats! 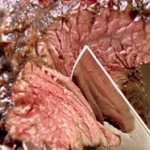 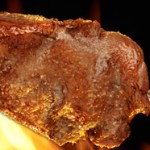 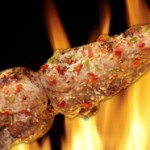 We never saw lamb come by and we only had the gaucho come by ONCE who had the “catch of the day” of white fish – Once he stopped, I was the only one who got a sample out of the four of us and FINALLY after the entire dinner including dessert was done, did we see another skewer of fish pass by.

The service from gauchos were fast at times, but not consistent.  When we wanted to try something and had our green turned up, there seemed to be LONG waits between skewers and the in-demand meat seems to disappear quickly!  I suggest that you take advantage of the gaucho and ask him for anything that you want them to hunt down for you or you’ll just keep seeing the guys carrying grilled pineapple and hot tomatoes pass by.

We sampled Maminha (mah-mee-yah), which is seasoned tri tip sirloin.  We also had Picanha (pea-con-yah) top sirloin: a lean, juicy cut of beef with a mild flavor; this seemed to taste the best along with Picanha Com Parmesao (al-ca-tra com par-me-san); a sirloin with parmesan cheese that was popular in our group.  We sampled Bife Com Alho (beef-e com al-yo); a tender beef basted in garlic seasonings (we didn’t notice a lot of garlic.) and there was Fraldinha (frall-ding-yah), a beef tender and Alcatra (al-ca-tra), a rotisserie grilled whole sirloin.  We couldn’t really tell the difference between many of the cuts and because it was served to us over cooked, it seemed dry. 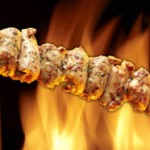 We only sampled a bit of poultry trying the Peru Com Bacon (pay-roo com bacon), a lean, juicy turkey breast wrapped in bacon; and the Frango Agri-doce (frango awh-gree do-see), a sweet and spicy chicken covered in a flavorful sauce that was decent.  The Coracao (cor-da-sone), grilled tender chicken hearts served with a twist of lime just looked just gross, so none of our group was willing to try them.  We actually ended up passing on the Presunto(pray-zoon-toe), which is a lean cut of ham when it finally came by because we were just feeling “blah” and tired of it all by then.  We waited and waited for the Lombo (lome-bow), a marinated pork loin, but never saw it.  Much like we waited and waited for something good to come! 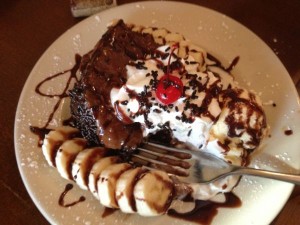 The cake was moist due to the ice cream on top, the outer frosting was ok, but the odd fudgey (not so sweet) pudding type stuff on it sort of spoiled it.  The bananas were perfectly ripe, but a couple of bites a piece were all we needed to satisfy the sweet craving of conclusion and the rest was left behind.

David had the Rabanada,a warm cinnamon pastry with a creamy center, served with vanilla ice cream and laced with caramel sauce. 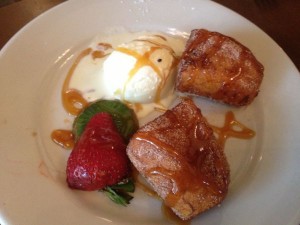 Apparently, they looked better than they tasted and he said they were pretty tough and flavorless.  Again, it was ok, but not worth coming back.

We waited the entire dinner for the manager to come by and scan one of our groupons.  My friend and I were confused because we purchased them on the same date, but hers was expired and mine wasn’t.  I commented to the manager who eventually came by – on the smashed screen on his cell phone used to scan.  He replied that it wasn’t his after all and we really just got the sense that he just didn’t care, which was the image he left us with regarding this place.

Near the end of our meal, we saw another table wait way beyond their completion who also seemed irritated.  On a surprising note, we noticed another table of guests make numerous trips to the salad bar and shoveling in the cuts of meats.  Perhaps they just haven’t experienced fine dining and this quality is good enough? 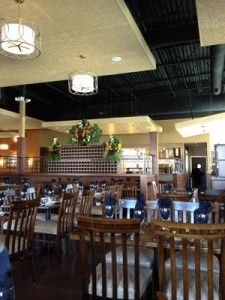 The overall ambiance is crowded but it was a bit weird with the large plastic flower and green arrangement things.  We all liked the paintings hanging on the walls!  The bathrooms needed attention, which is a pet peeve and we all agreed that at full price, we could have each eaten several options at Redstone next door and really enjoyed our meal.

I would skip this joint and recommend going elsewhere!