Since the very first time we dined at “Nectar” located in downtown Osseo, MN  we were hooked.  Chris and I enjoy the wine dinners that Chef Kevin hosts monthly.  Unfortunately we will not make the August Wine dinner as I will be in California for work.  We will however be will be attending the Verite event on the weekend following work and will also be visiting Continuum, so I guess all is well…

A few weeks back Chris and I had dinner at Nectar.  The July weather was too hot and we did not feel like cooking.  It was an easy decision to go to Nectar.  Before we sat down to eat Chris noticed the July Wine Event and we immediately reserved a spot for four.

While we were eating and talking about the dinner Chef Kevin was gracious enough to share a sample of the Peterson Sangiovese.  We were drinking a Cabernet Sauvignon from Howell Mountain initially and were surprised how much we enjoyed the Sangiovese following it.  We loved it!

We added another reservation for our friend Julie and were eager for the event.  Move forward a few weeks later….

It was time for the Peterson Wine dinner.  Chris and I arrived around 6:30pm in anticipation of another great meal!  We were seated in the middle table set for five.  The menu was placed at each setting and after reading it my mouth was salivating. 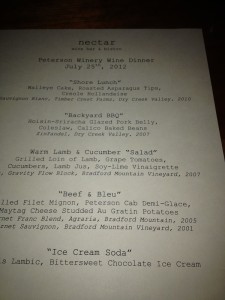 Jim from Wine Merchants made a brief introduction starting the dinner and introduced wine maker Fred Peterson to the group.  Fred spent some time talking about his past and the start of the Peterson winery.  He was a very entertaining person and we all enjoyed his stories.

We started the dinner tasting Fred’s Sauvignon Blanc.  It had a grassy smell to it.  We also noticed grapefruit and melon.  It was paired with a Walleye Cake with roasted asparagus tips with Creole Hollandaise sauce.  The cake was excellent and paired perfectly with the Sauvignon Blanc.  We noted lemon flavors within the wine and the finish was long and was felt in our mid palate. 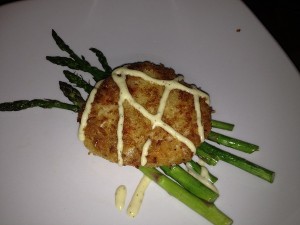 The next course of wine was the 2007 Dry Creek Valley Zinfandel.  As Fred was describing the wine he briefly talked about the history of Zinfandels.  He had mentioned the Zinfandel Varietal was traced back to its initial roots in Croatia.

As we tasted this wine we were very impressed.  We noted pepper and spice like we might expect out of a Zin.  The tannins were nice and they were felt in the front and finished in our mid palate.  The finish was long and we could taste Black Berries, Dark Cherries, and Vanilla.

Kevin paired the Zinfandel with a Hoisin-Sriracha Glazed Pork Belly with Coleslaw and Calico Baked Beans.  A delicious pairing! 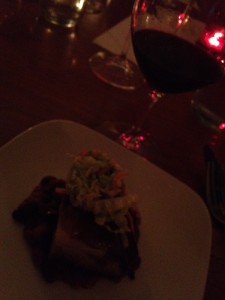 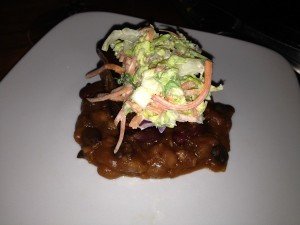 The third course was Kevin’s warm “Lamb and Cucumber salad”.  We were served a plate of grilled loin of lamb including grape tomatoes, cucumber and a lamb jus, soy-lime vinaigrette.  We have enjoyed this salad before and really enjoyed it.  This salad is excellent!

Along with it Fred served us his Syrah from the Gravity Flow Block.  After hearing the description, I would love to go and check it out but I think I will need to make sure I have my hiking shoes on!  The Syrah smelled like dark fruit with rich berries, cocoa and vanilla. 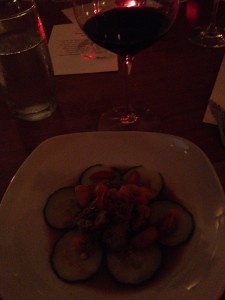 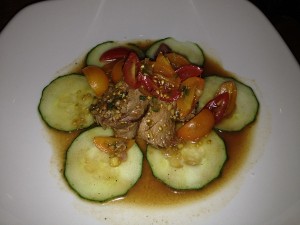 In between the third and fourth pairing Fred came and visited us at our table.  We spent some time talking about his wines.  We mentioned that we will be in Sonoma mid August and asked Fred if he would be around.  Chris will email Fred with the  dates of our visit and hopefully we can stop by for a tasting and tour.  If we make it happen I see another blog in the future!

The Cabs were paired with Kevin’s “Beef and Bleu”, which was a grilled Filet Mignon.  It was dressed with a Peterson Cab Demi-Glace and Maytag Cheese on top of Studded Au  Gratin Potatoes.  The Filet was excellent!  You didn’t even need a knife to cut the steak and Scott and I were wishing we had more.  I was at a loss of words with the pairing it was so good.  Everyone agreed that the wines and food were superior. 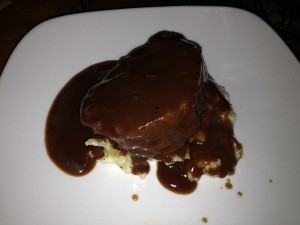 The final course serve was an Ice Cream Soda.  The soda was a Cassis Lambic with Bittersweet Chocolate Ice Cream. 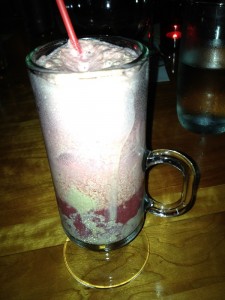 We wrapped up the evening reminiscing with Chef Kevin about his dinner.  He did an excellent job and we look forward to another Wine and Dinner Event.  We truly enjoyed the night with Scott, Chris, and Julie.  By the time we left it was 10:30pm as we had such a good time we lost track of time!

Blending wines are one of the most enjoyable things a…

Summer time is Rose' time for us.  We spend many… 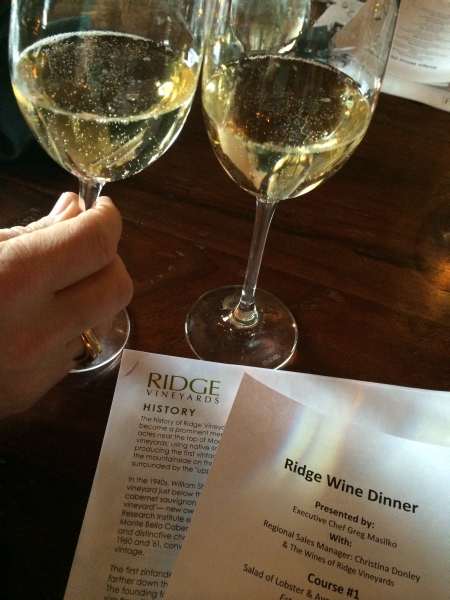