The first time we tried Renwood wines was during a wine dinner event at the Nectar wine bar and Bistro with some friends.  As usual, Chef Kevin did a great job pairing the food and wine.  I was quite surprised how good the Renwood Zinfandel’s tasted!  We left the dinner and wine tasting around 10 pm.  As we approached our car we noticed another couple was carrying some Renwood wine.  We asked them where they got the bottles discovering that Kevin sells the wines after the dinner.  We didn’t know this and mentioned to him that people need to be made aware.  We wandered back inside and purchased a few wines.  One of the wines was a 2005 Vintage Port.

After shoveling out from a recent winter storm, mother nature threw another curve ball and we had to deal with rain.  If you were a snowmobile fan the rain wreaked havoc with the snow and any plans of riding.  Now that the temperatures are back below freezing the snow is hard as dirt.  During the week Chris and Heather had made plans for an over night at their place.  With the recent poor weather, we just were not going to take a chance to drive in that!

As we were gathering our things I grabbed a couple bottles of wine and the 2005 Vintage Port from Renwood Winery. 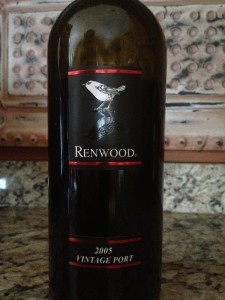 As our night approached its end we decided to have a night cap and I poured us all a glass of the port.  We were very happy with it and called it a night.

The following day we were hanging out at home.  Chris was having some of her friends over to watch the Bachelor Wedding Special.  I was thinking about how tasty the Port had been so I poured us each a glass.  I had my tasting sheet ready and started taking notes.  My notes are based on the bottle being open the day prior.

Sight
The color depth was deep with a nice dark Garnet hue. 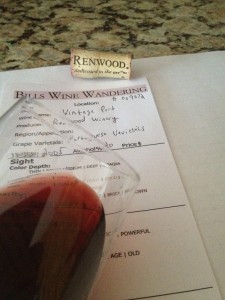 Smell
The aroma was medium and smelled like middle aged fruit.  Maybe a slight nose of Cocoa and sweet Brandy.

Taste
The 2005 Vintage Port was not sweet or dry and was full bodied, while the acidity was nice.  The tannins were soft and felt on the roof of my mouth.  The Port was very flavorful with a long finish and I could taste dark fruit and Brandy.

What I really liked about this port is it is created like a traditional Port.  Using five varietals from Portugal: Alvarahao, Bastardo, Souzao, Tina Cao, Touriga, and one from Spain Tinta Roriz (Tempranillo).

When Dave drank it the night before, he said “I hope the Port we are making tastes just like the Vintage Port from Renwood Winery.”  I would have to agree with Dave.

We were able to enjoy the bottle of Renwood port a few more times before it was empty!